The Anti-Waste League was a political party in the United Kingdom, founded in 1921 by the newspaper proprietor Lord Rothermere.

The formation of the League was announced in a January 1921 edition of the Sunday Pictorial with Rothermere attacking what he saw as government waste during the Depression of 1920–1921. [1] As such the party advocated reduced spending in government, at both local and national level. [1] It was particularly critical of the retention of the high levels of income tax after the end of the war as well as the funding provided for the 'homes fit for heroes' scheme. [2]

The party stood in a number of by-elections, taking an increasingly anti-communist line. James Malcolm Monteith Erskine was elected as a joint nominee with an unofficial Conservative Association in the 1921 Westminster St George's by-election, and Murray Sueter was elected in a joint candidacy with the Independent Parliamentary Group in the 1921 Hertford by-election. Rothermere's son Esmond Harmsworth became the leader of the party's Westminster grouping, which co-operated closely with the Independent Parliamentary Group of Horatio Bottomley. [1] Max Aitken, Lord Beaverbrook was also a leading patron of the group. [2]

A further crisis came with a by-election in the Abbey division of Westminster in August 1921. All three candidates claimed to be representing Anti-Waste and to be unconnected with the Coalition. Brigadier-General Nicholson, theoretically the official Unionist nominee, described himself as 'Constitutional and Independent Conservative Anti-Waste', as opposed to Lieutenant R.V.K. Applin, the Anti-Waste's official candidate, and Sir Arnold Lupton, a former Liberal MP for Sleaford who stood as 'Independent Liberal and Anti-Waste'. Nicholson's victory by just over 1,000 on a low poll was indeed a glorious triumph for the government. It was followed by another desperate contest in London, in West Lewisham where Sir Philip Dawson, Conservative and Anti-Waste, defeated Lieutenant-Commander Windham, the Anti-Waste candidate, by just 747 votes.

In reaction to the growth of the League, the Conservatives launched a Committee for National Expenditure, led by Eric Geddes, with the aim of cutting spending, and eventually acted on many of its recommendations. [1] As their support dipped in the face of the Conservatives co-opting their ideas the League changed its focus to sponsoring independent candidates and even those from other parties who shared their aims. [1] Following the 1922 general election the League disbanded with most of its members returning to the Conservative Party. [1] 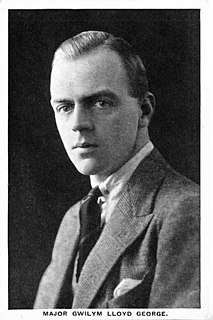 Gwilym Lloyd George, 1st Viscount Tenby, was a Welsh politician and cabinet minister. The younger son of David Lloyd George, he served as Home Secretary from 1954 to 1957.

The 1922 Newport by-election was by-election held in the parliamentary constituency of Newport on 18 October 1922. The by-election attracted especial attention, both at the time and since, as it was seen as a crucial electoral test of the viability of the Lloyd George Coalition Government, formed of followers of David Lloyd George with the Conservative Party, the latter of which contained an increasing number of members who wished to leave the coalition and regain the party's independence.

Westminster Abbey was a constituency in the Parliament of the United Kingdom. It returned one Member of Parliament (MP) to the House of Commons by the first past the post system of election.

The 1920 Stockport by-election was a parliamentary by-election held on 27 March 1920 for the constituency of Stockport, in Cheshire.

The 1921 Westminster Abbey by-election was a parliamentary by-election held on 25 August 1921 for the British House of Commons constituency of Westminster Abbey in London. The seat had become vacant when the Conservative Member of Parliament (MP) William Burdett-Coutts had died on 28 July 1921. Burdett-Coutts had held the seat since it had been created for the 1918 general election, when he had been returned unopposed.

The Coalition Coupon was a letter sent to parliamentary candidates at the 1918 United Kingdom general election, endorsing them as official representatives of the Coalition Government. The 1918 election took place in the heady atmosphere of victory in the First World War and the desire for revenge against Germany and its allies. Receiving the coupon was interpreted by the electorate as a sign of patriotism that helped candidates gain election, while those who did not receive it had a more difficult time as they were sometimes seen as anti-war or pacifist. The letters were all dated 20 November 1918 and were signed by Prime Minister David Lloyd George for the Coalition Liberals and Bonar Law, the leader of the Conservative Party. As a result, the 1918 general election has become known as "the coupon election".

The 1922 Bodmin by-election was a parliamentary by-election for the British House of Commons. The constituency of Bodmin in Cornwall polled on 23 February 1922. The by-election was notable for the opposition Liberal Party gaining a seat from the Coalition-supporting Conservative Party.

Frederick Joseph Laverack was an English social worker, campaigner for the blind and Liberal Member of Parliament. He contested Brixton in London on four occasions in the 1920s, winning on one occasion.

The 1921 Cardiganshire by-election was a parliamentary by-election held for the British House of Commons constituency of Cardiganshire on 18 February 1921. The election was important for the bitterness of the contest between the Coalition and Independent factions within the Liberal Party and the deepening of this division within the party as a factor in the long-term decline of Liberalism in Wales.

Sir Joseph Davies was a Welsh businessman, commercial statistician and Liberal Party politician. He was one of a talented group of men and women who worked closely with David Lloyd George during his premiership as a key member of Lloyd George's wartime secretariat, known as the Garden Suburb.

Sir James Malcolm Monteith Erskine, sometimes referred to as J. M. M. Erskine, was a British politician. First elected at a Westminster St George's by-election in 1921 as an Anti-Waste League candidate, then returned a second time as an Independent Conservative, Erskine went on to be returned twice more as an unopposed official Conservative.