This election is considered a political realignment, with the Conservative Party going on to spend all but eight of the next forty-two years as the largest party in Parliament, Labour emerging as the main competition to the Conservatives, and the Liberal Party falling to third-party status.

Elections were not held in Southern Ireland due to the signing of the Anglo-Irish Treaty in 1921. Southern Ireland seceded from the United Kingdom, shortly afterwards, to form the Irish Free State on 6 December 1922.

The Liberal Party were split between the "National Liberals" following David Lloyd George, who had been ousted as Prime Minister the previous month, and the "Liberals" following former Prime Minister H. H. Asquith. The Conservatives had, until October 1922, been in coalition with a faction of the Liberals (that which later became the National Liberals) led by Lloyd George, at which point Bonar Law had formed a Conservative majority government.

Although still leader of the Liberal Party and a frequent public speaker, former Prime Minister Asquith was no longer a particularly influential figure in the national political debate, and he had played no part in the downfall of the Lloyd George coalition. Most attention was focused on the new and most recent Prime Ministers. Asquith's daughter Violet Bonham-Carter, a prominent Liberal Party campaigner, likened the election to a contest between a man with sleeping sickness (Bonar Law) and a man with St Vitus Dance (Lloyd George). [1]

Some Lloyd George National Liberals were not opposed by Conservative candidates (e.g. Winston Churchill, who was defeated at Dundee nonetheless), while many leading Conservatives (e.g. former leaders Sir Austen Chamberlain and Arthur Balfour and former Lord Chancellor Lord Birkenhead) were not members of Bonar Law's government and hoped to hold the balance of power after the election (comparisons were made with the Peelite group—the ousted Conservative front bench of the late 1840s and 1850s); this was not to be, as Bonar Law won an overall majority.

It was the first election where Labour surpassed the combined strength of both Liberal parties in votes and seats.

Some Liberal candidates stood calling for a reunited Liberal Party, while others appear to have backed both Asquith and Lloyd George. Few sources are able to agree on exact numbers, and even in contemporary records held by the two groups, some MPs were claimed for both sides. By one estimate, there were 29 seats where Liberals stood against one another. This is thought to have cost them at least 14 seats, 10 of them to Labour, so in theory a reunited Liberal Party would have been much closer to, and perhaps even ahead of, Labour in terms of seats. However, in reality the two factions were on poor terms, and Lloyd George was still hoping for a renewed coalition with the Conservatives. [2]

Neither of the leaders of the two main parties would get to enjoy their success in the election for very long; within less than a month of the election, Clynes was defeated in a leadership challenge by former Labour leader Ramsay MacDonald, while Bonar Law would only last a little over seven months as Prime Minister before being forced to step down due to a terminal illness, resulting in Stanley Baldwin succeeding him as both party leader and Prime Minister. As a result, Bonar Law was the shortest serving UK Prime Minister of the twentieth century.

The crying need of the nation have this moment ... Is that we should have tranquility and stability both at home and abroad so that the free scope should be given to the initiative and enterprise of our own citizens, for it is in that way, far more than by any action of the Government that we can hope to recover from the economic and social results of the war. [3]

The Labour Party proposed to nationalise the mines and railways, to impose a levy on financial capital, and to revise the peace treaties. It promised a higher standard of living for workers, higher wages, and better housing. [4]

†1 MP elected as an Anti-Waste League candidate at a 1921 by-election, but moved to the Conservatives for the 1922 election

Herbert Henry Asquith, 1st Earl of Oxford and Asquith,, generally known as H. H. Asquith, was a British statesman and Liberal politician who served as Prime Minister of the United Kingdom from 1908 to 1916. He was the last prime minister to lead a majority Liberal government, and he played a central role in the design and passage of major liberal legislation and a reduction of the power of the House of Lords. In August 1914, Asquith took Great Britain and the British Empire into the First World War. In 1915, his government was vigorously attacked for a shortage of munitions and the failure of the Gallipoli Campaign. He formed a coalition government with other parties, but failed to satisfy critics. As a result, he was forced to resign in December 1916, and he never regained power.

Andrew Bonar Law was a British Conservative politician who served as Prime Minister of the United Kingdom from October 1922 to May 1923.

This article gives an overview of liberalism in the United Kingdom. It is limited to liberal political parties with substantial support, mainly proved by having had a representation in parliament. The sign ⇒ denotes another party in that scheme. For inclusion in this scheme, it is not necessary that parties labelled themselves as a liberal party.

The Asquith coalition ministry was the Government of the United Kingdom under the Liberal Prime Minister H. H. Asquith from May 1915 to December 1916. It was formed as a multi-party war-time coalition nine months after the beginning of the First World War but collapsed when the Conservative Party withdrew. 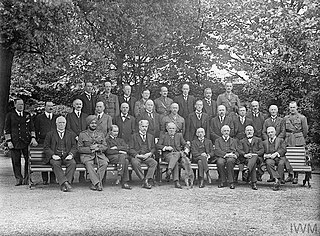 The Paisley by-election, 1920 was a parliamentary by-election held on 12 February 1920 for the House of Commons constituency of Paisley in Scotland. It was caused by the death of the constituency's sitting Liberal Member of Parliament Sir John Mills McCallum.

The Coalition Coupon was a letter sent to parliamentary candidates at the 1918 United Kingdom general election, endorsing them as official representatives of the Coalition Government. The 1918 election took place in the heady atmosphere of victory in the First World War and the desire for revenge against Germany and its allies. Receiving the coupon was interpreted by the electorate as a sign of patriotism that helped candidates gain election, while those who did not receive it had a more difficult time as they were sometimes seen as anti-war or pacifist. The letters were all dated 20 November 1918 and were signed by prime minister David Lloyd George for the Coalition Liberals and Bonar Law, the leader of the Conservative Party. As a result, the 1918 general election has become known as "the coupon election". 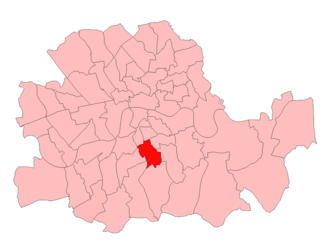