The 1885 United Kingdom general election was held from 24 November to 18 December 1885. This was the first general election after an extension of the franchise and redistribution of seats. For the first time a majority of adult males could vote and most constituencies by law returned a single member to Parliament fulfilling one of the ideals of Chartism to provide direct single-member, single-electorate accountability. It saw the Liberals, led by William Gladstone, win the most seats, but not an overall majority. As the Irish Nationalists held the balance of power between them and the Conservatives who sat with an increasing number of allied Unionist MPs (referring to the Union of Great Britain and Ireland), this exacerbated divisions within the Liberals over Irish Home Rule and led to a Liberal split and another general election the following year. 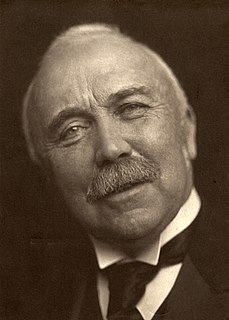 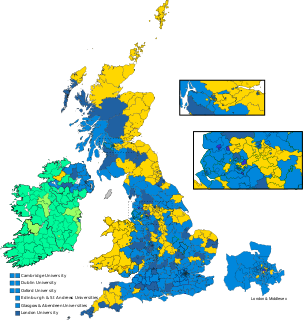 The 1874 United Kingdom general election saw the incumbent Liberals, led by William Gladstone, lose decisively, even though it won a majority of the votes cast. Benjamin Disraeli's Conservatives won the majority of seats in the House of Commons, largely because they won a number of uncontested seats. It was the first Conservative victory in a general election since 1841. Gladstone's decision to call an election surprised his colleagues, for they were aware of large sectors of discontent in their coalition. For example, the nonconformists were upset with education policies; many working-class people disliked the new trade union laws and the restrictions on drinking. The Conservatives were making gains in the middle-class, Gladstone wanted to abolish the income tax, but failed to carry his own cabinet. The result was a disaster for the Liberals, who went from 387 MPs to only 242. Conservatives jumped from 271 to 350. For the first time the Irish nationalists would be elected. Gladstone himself noted: "We have been swept away in a torrent of gin and beer" 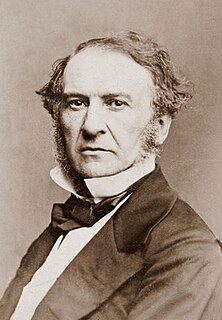 Over the history of the House of Commons, the number of Members of Parliament (MPs) has varied for assorted reasons, with increases in recent years due to increases in the population of the United Kingdom. There are currently 650 constituencies, each sending one MP to the House of Commons, corresponding to approximately one for every 92,000 people, or one for every 68,000 parliamentary electors. 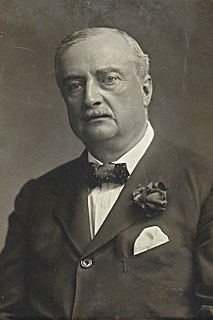 The Irish component of the December 1910 United Kingdom general election took place between 3 and 19 December, concurrently with the polls in Great Britain. Though the national result was a deadlock between the Conservatives and the Liberals, the result in Ireland was, as was the trend by now, a large victory for the Irish Parliamentary Party. The IPP supported the Liberals to form a government after the election. This was to be the party's last victory, however. Due to the outbreak of World War I in 1914, the next general election would not be held until 1918, by which time events both in Ireland and Britain and outside would conspire to see the rise of a new nationalist party, Sinn Féin, and the subsequent demise of the IPP.

1886 The Derby by-election was a parliamentary by-election held for the House of Commons constituency of Derby, the county town of Derbyshire on 9 February 1886.