The result at the last general election and the current situation in the House of Commons is given below:

For full details of changes during the current Parliament, see Defections and suspensions and By-elections.

Provisionally, the next general election will be conducted using the same electoral system as the 2019 election (first-past-the-post).

The Conservative Party, which won a majority at the 2019 general election, included pledges in its manifesto to remove the fifteen-year limit on voting for British citizens living abroad, and to introduce a voter identification requirement [6] in Great Britain.

The postponed Sixth Periodic Review of Westminster constituencies proposed reducing the number of constituencies from 650 to 600. In April 2016, each of the four parliamentary Boundary Commissions of the United Kingdom recommenced their review process. [10] [11] [12] A projection by psephologists Colin Rallings and Michael Thrasher of how the 2017 votes would have translated to seats under the new boundaries suggested the changes would be beneficial to the Conservative Party and detrimental to Labour. [13] [14]

Prior to the Parliamentary Constituencies Act 2020, boundary changes could not be implemented until they were approved by both Houses of Parliament. No changes were submitted by the government during the 2017–2019 Parliament. [15] The majority Conservative government manifesto states that this will be implemented before the next general election.

Date of the election

Removing the power of the monarch, on advice of the prime minister, to dissolve parliament before its five-year maximum length, [16] the act permits early dissolution if the House of Commons votes by a two-thirds supermajority. Parliament is also dissolved if a government loses a vote of no confidence by a simple majority and a new government is not formed within 14 days. [17] Alternatively, a bill requiring just a simple majority in both Houses could be introduced to establish in law an earlier date for the election, which is how the date of the previous general election was set in 2019. [18]

Thus, the next general election is due to take place on Thursday 2 May 2024, unless it is triggered earlier. [19] Under the Electoral Registration and Administration Act 2013 parliament would be dissolved 25 working days before this date on Tuesday 26 March. [20] Under the Fixed-term Parliaments Act, the Prime Minister may schedule polling day up to two months after 2 May, subject to approval by both Houses.

At the 2019 general election, where the Conservatives won a majority of 80 seats, the manifesto of the party contained a commitment to repeal the Fixed-term Parliaments Act due to "paralysis at a time when the country has needed decisive action". [21] The pledge was confirmed in the first Queen's Speech following the election. [22]

In December 2020, the government published a draft Fixed-term Parliaments Act 2011 (Repeal) Bill, later retitled the Dissolution and Calling of Parliament Bill when it was laid before Parliament in May 2021, [23] which would ultimately repeal the 2011 Fixed-term Parliaments Act, revive the prerogative powers of the monarch to dissolve Parliament (at the request of the prime minister), and ensure that a Parliament is automatically dissolved five years after it first met (16 December 2024) and polling day being 25 working days later (23 January 2025). [24] The last time Parliament was dissolved in this way for a general election was in 1949, when the 1950 general election was announced for February.

This section is an excerpt from Opinion polling for the next United Kingdom general election § Graphical summary.[ edit ]

The chart below shows opinion polls conducted for the next United Kingdom general election. The trend lines are local regressions (LOESS).

As a result of the Fifth Periodical Review of the Boundary Commission for Scotland, Scotland is covered by 59 constituencies of the House of Commons of the United Kingdom Parliament - 19 Burgh constituencies and 40 County constituencies. Constituencies marked * appear on the Central Area Enlargement.

The Fixed-term Parliaments Act 2011 (FTPA) is an Act of the Parliament of the United Kingdom that for the first time sets in legislation a default fixed election date for a general election to the Westminster parliament. Before the passage of the Act elections were required by law to be held at least once every five years, but could be called earlier if the Prime Minister advised the monarch to exercise the royal prerogative to do so. Prime Ministers often employed this mechanism to call an election before the end of the five-year term, sometimes fairly early in it, and some critics saw this as giving an unfair advantage to an incumbent Prime Minister. An election could also take place following a vote of no confidence in the government: such a motion would be passed with an ordinary simple majority of those voting in the House of Commons and would, according to constitutional convention, force the government to resign, at which point the Prime Minister would generally advise the monarch to call for a new election.

The Sixth Periodic Review of Westminster constituencies, also known as the 2013 Review, 2018 Review, or just boundary changes, was an ultimately unfruitful cycle of the process by which constituencies of the House of Commons of the United Kingdom are reviewed and redistributed. The four UK boundary commissions carried out their reviews between 2011 and 2018, but their recommendations were not taken up by the government and were formally laid aside in 2020. 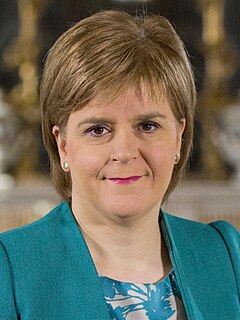