Last updated March 12, 2022
Modifying noun phrases by placing them next to each other
This article is about the grammatical construction. For other uses, see Apposition (disambiguation).
Not to be confused with dislocations, an apposition-like structure whose elements are not placed side by side.

Apposition is a grammatical construction in which two elements, normally noun phrases, are placed side by side and so one element identifies the other in a different way. The two elements are said to be in apposition, and one of the elements is called the appositive, but its identification requires consideration of how the elements are used in a sentence.

For example, in these sentences, the phrases Alice Smith and my sister are in apposition, with the appositive identified with italics:

Traditionally, appositions were called by their Latin name appositio, derived from the Latin ad ("near") and positio ("placement"), although the English form is now more commonly used.

Apposition is a figure of speech of the scheme type and often results when the verbs (particularly verbs of being) in supporting clauses are eliminated to produce shorter descriptive phrases. That makes them often function as hyperbatons, or figures of disorder, because they can disrupt the flow of a sentence. For example, in the phrase: "My wife, a surgeon by training,...", it is necessary to pause before the parenthetical modification "a surgeon by training".

If there is any doubt that the appositive is non-restrictive, it is safer to use the restrictive punctuation.[ citation needed ] In the example above, the restrictive first sentence is still correct even if there is only one brother.

A relative clause is not always an appositive.

In the following examples, the appositive phrases are shown in italics:

A kind of appositive is the false title, a restrictive phrase, as in "Noted biologist Jane Smith has arrived" in which the phrase Noted biologist is used as an informal title. The use of false titles is controversial.

In several languages, the same syntax that is used to express such relations as possession can also be used appositively:

In linguistics, an adjective is a word that modifies a noun or noun phrase or describes its referent. Its semantic role is to change information given by the noun.

English grammar is the way in which meanings are encoded into wordings in the English language. This includes the structure of words, phrases, clauses, sentences, and whole texts.

In rhetoric, a parenthesis or parenthetical phrase is an explanatory or qualifying word, clause, or sentence inserted into a passage. The parenthesis could be left out and still form grammatically correct text. Parentheses are usually marked off by round or square brackets, dashes, or commas.

An adjective phrase is a phrase the head of which is an adjective, almost any grammar or syntax textbook or dictionary of linguistics terminology defines the adjective phrase in a similar way, e.g. Kesner Bland (1996:499), Crystal (1996:9), Greenbaum (1996:288ff.), Haegeman and Guéron (1999:70f.), Brinton (2000:172f.), Jurafsky and Martin (2000:362). The adjective can initiate the phrase, conclude the phrase, or appear in a medial position. The dependents of the head adjective—i.e. the other words and phrases inside the adjective phrase—are typically adverb or prepositional phrases, but they can also be clauses. Adjectives and adjective phrases function in two basic ways, attributively or predicatively. An attributive adjective (phrase) precedes the noun of a noun phrase. A predicative adjective (phrase) follows a linking verb and serves to describe the preceding subject, e.g. The man is very happy. 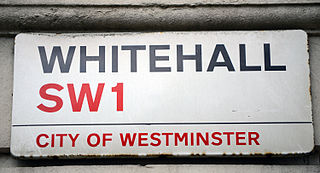 Hyperbaton, in its original meaning, is a figure of speech in which a phrase is made discontinuous by the insertion of other words. In modern usage, the term is also used more generally for figures of speech that transpose sentences' natural word order, and it is also called an anastrophe.

German grammar is the set of structural rules of the German language, which in many respects is quite similar to that of the other Germanic languages. Although some features of German grammar, such as the formation of some of the verb forms, resemble those of English, German grammar differs from that of English in that it has, among other things, cases and gender in nouns and a strict verb-second word order in main clauses.

In semantics, a modifier is said to be restrictive if it restricts the reference of its head. For example, in "the red car is fancier than the blue one", red and blue are restrictive, because they restrict which cars car and one are referring to. By contrast, in "John's beautiful mother", beautiful is non-restrictive; "John's mother" identifies her sufficiently, whereas "beautiful" only serves to add more information.

A relative clause is typically a clause that modifies a noun or noun phrase, and uses some grammatical device to indicate that one of the arguments within the relative clause has the same referent as that noun or noun phrase. For example, in the sentence I met a man who wasn't there, the subordinate clause who wasn't there is a relative clause, since it modifies the noun man, and uses the pronoun who to indicate that the same "man" is referred to within the subordinate clause.

A subordinate clause, dependent clause or embedded clause is a clause that is embedded within a complex sentence. For instance, in the English sentence "I know that Bette is a dolphin", the clause "that Bette is a dolphin" occurs as the complement of the verb "know" rather than as a freestanding sentence. Subtypes of dependent clauses include content clauses, relative clauses, and adverbial clauses.

Relative clauses in the English language are formed principally by means of relative pronouns. The basic relative pronouns are who, which, and that; who also has the derived forms whom and whose. Various grammatical rules and style guides determine which relative pronouns may be suitable in various situations, especially for formal settings. In some cases the relative pronoun may be omitted and merely implied.

Poula is an Angami-Pochuri language that is predominantly spoken by the Poumai Naga people in Senapati district in Manipur and Phek district in Nagaland, India. The language of Chingjaroi is also closely related to poula.

In English, possessive words or phrases exist for nouns and most pronouns, as well as some noun phrases. These can play the roles of determiners or of nouns.

In linguistics, a relativizer is a type of conjunction that introduces a relative clause. For example, in English, the conjunction that may be considered a relativizer in a sentence such as "I have one that you can use." Relativizers do not appear, at least overtly, in all languages; even in languages that do have overt or pronounced relativizers, they do not necessarily appear all of the time. For these reasons it has been suggested that in some cases, a "zero relativizer" may be present, meaning that a relativizer is implied in the grammar but is not actually realized in speech or writing. For example, the word that can be omitted in the above English example, producing "I have one you can use", using a zero relativizer.

In grammar, sentence and clause structure, commonly known as sentence composition, is the classification of sentences based on the number and kind of clauses in their syntactic structure. Such division is an element of traditional grammar.

Thetical grammar forms one of the two domains of discourse grammar, the other domain being sentence grammar. The building blocks of thetical grammar are theticals, that is, linguistic expressions which are interpolated in, or juxtaposed to, clauses or sentences but syntactically, semantically and, typically, prosodically independent from these structures. The two domains are associated with contrasting principles of designing texts: Whereas sentence grammar is essentially restricted to the structure of sentences in a propositional format, thetical grammar concerns the overall contours of discourse beyond the sentence, thereby being responsible for a higher level of discourse production.

Latin word order is relatively free. The subject, object, and verb can come in any order, and an adjective can go before or after its noun, as can a genitive such as hostium "of the enemy". A common feature of Latin is hyperbaton, in which a phrase is split up by other words: Sextus est Tarquinius "it is Sextus Tarquinius".