Armageddon: A Novel of Berlin

Armageddon, or Armageddon: A Novel of Berlin, is a 1963 novel by Leon Uris about post-World War II Berlin and Germany. The novel starts in London during World War II, and goes through to the Four Power occupation of Berlin and the Soviet blockade by land of the city's western boroughs. The description of the Berlin Airlift is quite vivid as is the inter-action between people of the five nations involved as the three major Western Allies rub along with the Soviet occupiers of East Berlin and East Germany. The book finishes with the end of the airlift but sets the scene for the following 40 years of Cold War.

The book explains some important consequences of defeating Nazi Germany:

The Cold War (1947–1953) is the period within the Cold War from the Truman Doctrine in 1947 to the conclusion of the Korean War in 1953. The Cold War emerged in Europe a few years after the successful US–USSR–UK coalition won World War II in Europe, and extended to 1989–91. In 1947, Bernard Baruch, the multimillionaire financier and adviser to presidents from Woodrow Wilson to Harry S. Truman, coined the term “Cold War” to describe the increasingly chilly relations between two World War II Allies: the United States and the Soviet Union. 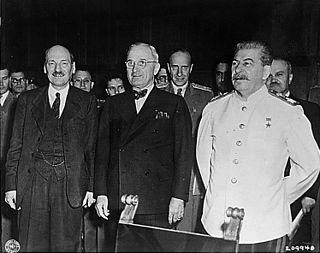 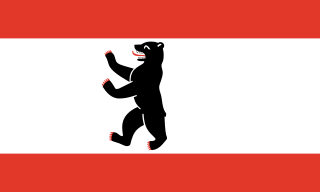 West Berlin was a political enclave which comprised the western part of Berlin during the years of the Cold War. There was no specific date on which the sectors of Berlin occupied by the Western Allies became "West Berlin", but 1949 is widely accepted as the year in which the name was adopted. West Berlin aligned itself politically with the Federal Republic of Germany and was directly or indirectly represented in its federal institutions. 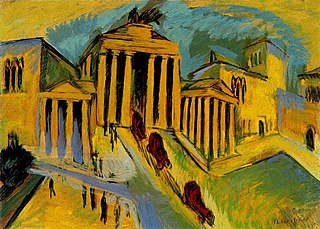 The history of Berlin starts with its foundation in the 13th century. It became the capital of the Margraviate of Brandenburg in 1417, and later of Brandenburg-Prussia, and the Kingdom of Prussia. Prussia grew rapidly in the 18th and 19th century, and formed the basis of the German Empire in 1871, which went on to become the Nazi Party in WW2. 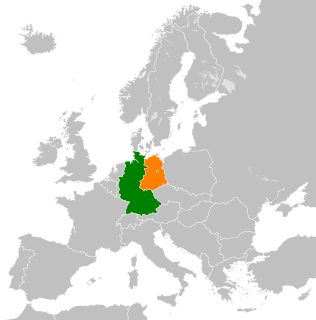 After the defeat of Nazi Germany in World War II, Germany was divided between the two global blocs in the East and West, a period known as the division of Germany. Germany was stripped of its war gains and lost territories in the east to Poland and the Soviet Union. At the end of the war, there were some eight million foreign displaced persons in Germany; mainly forced laborers and prisoners; including around 400,000 from the concentration camp system, survivors from a much larger number who had died from starvation, harsh conditions, murder, or being worked to death. Over 10 million German-speaking refugees arrived in Germany from other countries in Central and Eastern Europe. Some 9 million Germans were POWs, many of whom were kept as forced laborers for several years to provide restitution to the countries Germany had devastated in the war, and some industrial equipment was removed as reparations.

Nazism and the acts of the Nazi German state profoundly affected many countries, communities, and people before, during and after World War II. The regime's attempt to exterminate several groups viewed as subhuman by Nazi ideology was eventually stopped by the combined efforts of the wartime Allies headed by Britain, the Soviet Union, and the United States.

The Berlin Air Safety Centre (BASC) was established by the Allied Control Authority Coordinating Committee on 12 December 1945. Operations began in February 1946 under quadripartite flight rules Paragraph 4. Paragraph 4 of the rules begins: "The Berlin Air Safety Centre has been established in the Allied Control Authority Building with the object of ensuring safety of flights for all aircraft in the Berlin area. BASC regulates all flying in the Berlin control zone and also in the corridors extending from Berlin to the boundaries of adjacent control zones."

Known for most of its operational life as Royal Air Force Station Gatow, or more commonly RAF Gatow, this former British Royal Air Force airfield is in the district of Gatow in south-western Berlin, west of the Havel river, in the borough of Spandau. It was the home for the only known operational use of flying boats in central Europe, and was later used for photographic reconnaissance missions by de Havilland Chipmunks over East Germany. Part of the former airfield is now called General Steinhoff-Kaserne, and is home to the Luftwaffenmuseum der Bundeswehr, the German Air Force Museum. 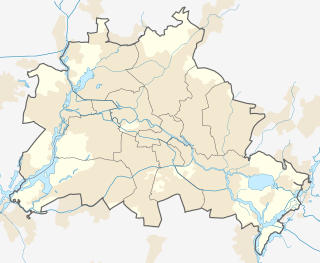 Steinstücken, a small settlement with approximately 200 inhabitants, is the southernmost territory of the Berlin borough of Steglitz-Zehlendorf, belonging to Wannsee. From the division of Germany in 1949 until a connecting corridor was created in 1971–72, Steinstücken was the only permanently inhabited of twelve original exclaves of West Berlin in East Germany, while West Berlin itself was an enclave controlled by the Western Allies, surrounded either by East Berlin or East German (GDR) territory. 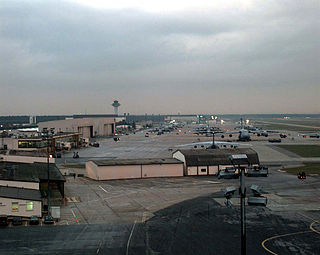 Rhein-Main Air Base was a United States Air Force air base near the city of Frankfurt am Main, Germany. It was a Military Airlift Command (MAC) and United States Air Forces in Europe (USAFE) installation, occupying the south side of Frankfurt Airport. Its military airport codes are discontinued. Established in 1945, Rhein-Main Air Base was the primary airlift and passenger hub for United States forces in Europe. It was billed as the "Gateway to Europe". It closed December 30, 2005.

Upon defeat of Nazi Germany in World War II, the victorious Allies asserted joint authority and sovereignty over 'Germany as a whole', defined as all territories of the former German Reich west of the Oder–Neisse line, having declared the destruction of Nazi Germany at the death of Adolf Hitler. The four powers divided 'Germany as a whole' into four occupation zones for administrative purposes, under the United States, United Kingdom, France and the Soviet Union respectively; creating what became collectively known as Allied-occupied Germany. This division was ratified at the Potsdam Conference. The four zones were as agreed in February 1945 by the United States, United Kingdom and Soviet Union meeting at the Yalta Conference; setting aside an earlier division into three zones proposed by the London Protocol.

The Big Lift is a 1950 drama film shot in black-and-white on location in the city of Berlin, Germany, that tells the story of "Operation Vittles", the 1948–49 Berlin Airlift, through the experiences of two U.S. Air Force sergeants.

Inter-zonal traffic was the cross-border traffic between the four designated garrison zones in Germany between 1945 and 1973 that were created in 1945 by the victors of the Second World War.

The 1948 Gatow air disaster was a mid-air collision in the airspace above Berlin, Germany that occurred on 5 April, sparking an international incident. A British European Airways (BEA) Vickers VC.1B Viking airliner crashed near RAF Gatow air base, after it collided with a Soviet Air Force Yakovlev Yak-3 fighter aircraft. All ten passengers and four crew on board the Viking were killed, as was the Soviet pilot. The disaster resulted in a diplomatic standoff between the United Kingdom and United States on one hand, and the Soviet Union on the other, and intensified distrust leading up to the Berlin Blockade in the early years of the Cold War. 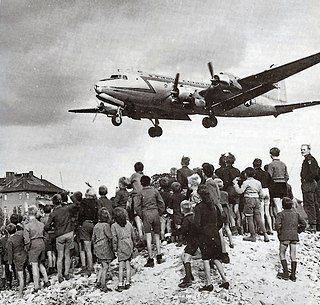 The Berlin Blockade was one of the first major international crises of the Cold War. During the multinational occupation of post–World War II Germany, the Soviet Union blocked the Western Allies' railway, road, and canal access to the sectors of Berlin under Western control. The Soviets offered to drop the blockade if the Western Allies withdrew the newly introduced Deutsche Mark from West Berlin.

The Allied Museum is a museum in Berlin. It documents the political history and the military commitments and roles of the Western Allies in Germany – particularly Berlin – between 1945 and 1994 and their contribution to liberty in Berlin during the Cold War era. 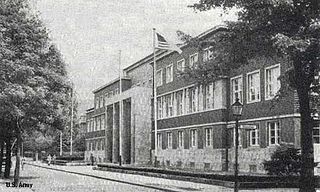 The Allied Kommandatura, or often just Kommandatura, also known as the Alliierte Kommandantur in German, was the governing body for the city of Berlin following Germany's defeat in World War II. The victorious allied powers established control of post-war Germany and other territories via shared Military Government councils, including for Berlin. The Kommandatura was often known as the little brother to the Allied Control Council, which had the same function for the whole of Germany, and was subordinate to it. It originally comprised representatives from the United States, the United Kingdom, and the Soviet Union but later included France. The Kommandatura had its home in the Berlin district of Dahlem.

The London Six-Power Conference in 1948 was held between the three Western occupation forces in Germany after the World War II and the Benelux countries. The aim of the conference was to pave the way for Germany's participation in the international community through the creation of a democratic and federal government in the area of the U.S., British and French sectors of the country. The conference was held in two sessions, the first from 23 February to 6 March, the second from 20 April to 2 June 1948.

The Treaty on Relations Between the USSR and GDR was a treaty between the Soviet Union and German Democratic Republic, commonly known as East Germany, signed on 20 September 1955. The treaty became the legal basis for the Group of Soviet Forces in Germany, and its successor, the Western Group of Forces to maintain its presence in Germany following the end of the Soviet Occupation.