The concept for the show was that Godfrey had several "talent scouts" who brought their discoveries onto the program to showcase their talents. The winner of each show was determined by a meter that judged the audience's applause. The radio series began July 2, 1946, and was heard on CBS Tuesday evenings at 9pm. The winner on October 1, 1946, was pianist José Melis, who later became a familiar late night television personality as the orchestra leader on Jack Paar's Tonight show.

In the summer of 1947, Arthur Godfrey's Talent Scouts moved to Fridays at 9:30 p.m. After August 1947 it aired on Mondays at 8:30 p.m. The radio show continued until October 1, 1956. With Archie Bleyer leading the orchestra, the show's announcer was George Bryan. The show's opening (to the tune of "Four and Twenty Blackbirds") featured Peggy Marshall and the Holidays singing:

At that point, the music would segue into trombonist Lou McGarity and the orchestra playing Godfrey's familiar theme song, "Seems Like Old Times," sometimes with Godfrey singing or humming along.

Contestants on the show included Pat Boone, The Chordettes, The McGuire Sisters and Carmel Quinn, all of whom went on to perform on Arthur Godfrey and His Friends. Other contestants included Tony Bennett, The Blackwood Brothers, Lenny Bruce, Roy Clark, Rosemary Clooney, Ken Berry, Florian ZaBach, Wally Cox, Vic Damone, The Diamonds, Eddie Fisher, Connie Francis, Don Knotts, Steve Lawrence, Al Martino, Barbara McNair, Marian McPartland, Johnny Nash, Leslie Uggams, Lorraine Donahue (who later appeared on The Voice of Firestone ), Joe Negri, Roger Williams (pianist), and Jonathan Winters. Swedish singer Kjerstin Dellert won a contest in 1948 with Someone to Watch Over Me , beginning her career as a vocalist there. [1] Patsy Cline first gained national attention with a winning performance of Walkin' After Midnight on the January 21, 1957, broadcast. Among those who auditioned but were not chosen to appear on the broadcast were Buddy Holly, The Four Freshmen, and Elvis Presley.

On television, Arthur Godfrey's Talent Scouts premiered December 6, 1948. According to the Nielsen ratings, it was the highest rated television show for the 1951–1952 season. It remained a highly popular show through the decade. The show took a great drop in ratings after orchestra bandleader Archie Bleyer left in the 1954–1955 season, but rebounded as the scouts continued to discover more talent. However, by the fall of 1957, television audiences began to prefer westerns and adventure shows to quiz programs and Godfrey's ratings dropped out of the top 30 Nielsen Chart. [2] The show aired its final episode on January 1, 1958.

On December 24, 1956, the show became the first entertainment program to be videotaped for broadcast, as the then-new technology was used for a time-delayed rebroadcast in the Pacific Time Zone. An Ampex quadruplex videotape machine recorded the initial live broadcast to the Eastern part of the country, which was replayed three hours later. [3] As with his radio programs, CBS allowed Godfrey to periodically host the show remotely from his Virginia farm while the rest of the cast and guests performed in New York. 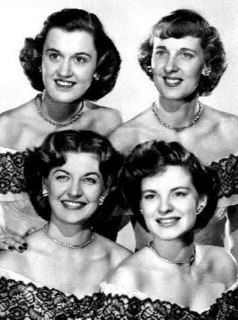 The Chordettes were an American female popular singing quartet, usually singing a cappella, and specializing in traditional popular music. They are best known for their songs "Mr. Sandman" and "Lollipop".

Arthur Morton Godfrey was an American radio and television broadcaster and entertainer who was sometimes introduced by his nickname The Old Redhead. The infamous on-air firing of cast member Julius LaRosa tainted his down-to-earth image and resulted in a marked decline in his popularity which he was never able to regain. At the peak of his success in the mid-1950s, Godfrey headed two CBS-TV weekly series and a daily 90-minute television mid-morning program, but his presence had been reduced by the early 1960s to hosting the occasional television special and his daily network radio show, which ended in 1972. 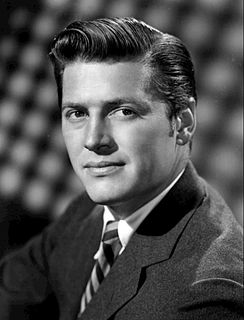 Albert Gordon MacRae was an American actor, singer and radio/television host who appeared in the film versions of two Rodgers and Hammerstein musicals Oklahoma! (1955) and Carousel (1956) and who played the leading man of Doris Day in On Moonlight Bay (1951) and sequel By The Light of the Silvery Moon (1953).

The Gillette Cavalcade of Sports is an American radio-turned-television program by the National Broadcasting Company (NBC) that ran from 1942 to 1960. The program included broadcasts of a variety of sports, although it is primarily remembered for its focus on boxing matches.

Arthur Godfrey and His Friends is an American television variety show hosted by Arthur Godfrey. The hour-long series aired on CBS Television from January 1949 to June 1957, then again as a half-hour show from September 1958 to April 1959. 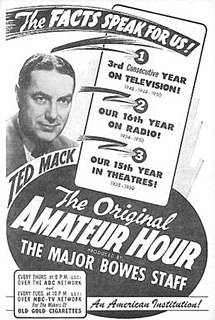 The Original Amateur Hour is an American radio and television program. The show was a continuation of Major Bowes Amateur Hour which had been a radio staple from 1934 to 1945. Major Edward Bowes, the originator of the program and its master of ceremonies, left the show in 1945 and died the following year. He was ultimately succeeded by Ted Mack, when the show was brought into television in 1948.

Julius La Rosa was an American traditional popular music singer, who worked in both radio and television beginning in the 1950s. 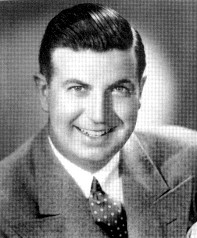 Donald T. McNeill was an American radio personality, best known as the creator and host of The Breakfast Club, which ran for more than 35 years.

The Edsel Show is an hour-long television special broadcast live on CBS in the United States on October 13, 1957, intended to promote Ford Motor Company's new Edsel cars. It was a milestone in the long career of entertainer Bing Crosby and is notable as the first CBS entertainment program to be recorded on videotape for rebroadcast in the western part of the country following a live performance for the east coast. Crosby arranged for this ‘live’ program to be ‘produced’ by his alma mater Gonzaga University in order that the profits could go to them in a tax efficient way. The program won the ‘Look’ magazine TV Award for ‘Best Musical Show’ and was nominated for an Emmy as the “Best Single Program of the Year”.

Kjerstin Dellert was a Swedish opera singer and theater manager.

The 1950–51 United States network television schedule began in September of 1950 and ended in the spring of 1951. This season became the first in which primetime was entirely covered by the networks. It was also the inaugural season of the Nielsen rating system. Late in the season, the coast-to-coast link was in service.

The 1951–52 United States network television schedule began in September of 1951 and ended in the spring of 1952. This was the first television season of national network interconnection by coaxial cable and microwave, meaning programming could be transmitted live coast-to-coast if needed.

The Mariners were a pop and gospel vocal group of the mid 20th century, particularly noted for their work with Arthur Godfrey.