The group was founded in Moscow in 1979 by Alexander "Sasha" Sitkovetsky, and achieved a considerable success at the first Soviet state-sanctioned rock festival held in Tbilisi, Georgia with Sitkovetsky's songs "Fasten Seat Belts", "Ireland. Ulster" and "Blues Caprice". In 1982 vocalist Arthur Berkut joined the band to finalize the lineup:

Autograph was atypical for a Russian rock band, playing more instrumental-based sound and much less symbolist lyrics. They are credited as a pioneering Soviet progressive/art rock/AOR band.

After a triumphal success and exhaustive touring throughout the USSR, Autograph became the first Soviet rock-group to achieve commercial success in the West, having toured more than 30 countries. On July 13, 1985, the band - the only one to represent the entire Eastern Europe - took part in Bob Geldof's Live Aid concert, performing before more than 2.5 billion people worldwide (transmitted live from Moscow). The signature song they performed was "Нам нужен мир" (or "Nam Nuzhen Mir - We Need Peace").

In 1987 the band represented the USSR in the Soviet-American concert Our Move organized by Bill Graham with Santana, The Doobie Brothers, Bonnie Raitt and James Taylor as featured artists. Autograph also performed at numerous international festivals along with John McLaughlin, Murray Head, Kenny Rogers, Tom Cochran, Glass Tiger, Ten Years After, Southside Johnny & the Asbury Jukes; opened for Chicago; worked closely with David Foster in Canada and Moscow, became a winner of the Sopot International Song Festival 1987 contest in Poland bringing home coveted independent press and audience awards as well as the best song prize for Sitkovetsky's "The World Inside".

After two years working successfully with an American manager Mary Becker, in 1989 the band signed a contract with Herb Cohen (Frank Zappa's management) in Los Angeles, California. Their debut album Tear Down the Borders on Rhino Records was released in 1991 and one of the most popular songs "I Need You" from that album was recorded by Rick Springfield for the blockbuster movie Iron Eagle II (1988).

Disbanded in 1990, Autograph reunited in summer of 2005 for a major re-union tour and a final grand anniversary concert at Moscow Olympic Stadium. This historical event attracted thousands of the legendary band's fans and was the first ever to be held in 'live-surround' format in Russia. The Autograph - 25 Years DVD and a live CD were released soon after.

In 2012 the band played in a unique 'Legends of Russian Rock' concert at Moscow's Green Theater, broadcast on the national and international TV.

Pesniary was a popular Soviet Belarusian folk rock VIA. It was founded in 1969 by guitarist Vladimir Mulyavin. Before 1970, the band was known under the name Liavony (Лявоны). 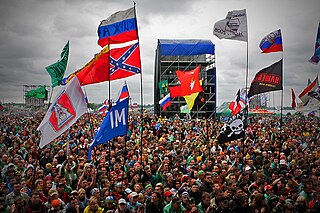 Rock music became known in the Soviet Union in the 1960s and quickly broke free from its Western roots. According to many music critics, its "golden age" years were the 1980s, when the Soviet underground rock bands became able to release their records officially. Since then, Russia and Russophone artists in various other countries developed a varied rock scene that covers virtually all rock genres, from classic and alternative rock to punk and heavy metal. The majority of the Russian bands perform in the Russian language.

The Alexandrov Ensemble is an official army choir of the Russian armed forces. Founded during the Soviet era, the ensemble consists of a male choir, an orchestra, and a dance ensemble. 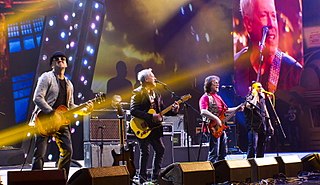 Gorky Park or Парк Горького is a Russian hard rock band, that gained mainstream popularity in the United States during Perestroika. Gorky Park is famous for its kitsch use of western stereotypes of Russians, such as pseudo-traditional clothing, balalaika-like guitar design and the hammer and sickle as their logo. It was the first Russian band to be aired on MTV.

Kino was a Soviet rock band formed in Leningrad in 1982, considered to be one of, if not the greatest rock band in the history of Russian music. The band was co-founded and headed by Viktor Tsoi, who wrote the music and lyrics for almost all of the band's songs. Over the course of eight years, Kino had released over 90 songs spanning over seven studio albums, as well as releasing a few compilations and live albums. The band's music was also widely circulated in the form of bootleg recordings through the underground magnitizdat distribution scene. Viktor Tsoi died in a car accident in 1990. Shortly after his passing, the band broke up after releasing their final album, consisting of songs that Tsoi and the group were working on in the months before his death. 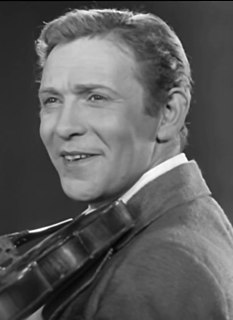 Leonid Osipovich Utyosov or Utesov was a famous Soviet estrada singer, and comic actor, who became the first pop singer to be awarded the prestigious title of People's Artist of the USSR in 1965. 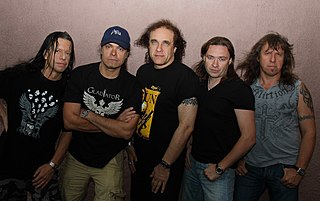 Master is a thrash metal band from Russia, founded in 1987 by former members of Aria. 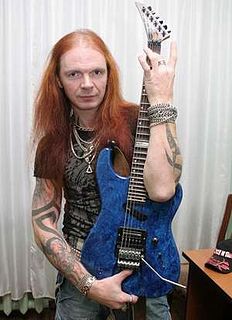 Sergey Konstantinovich Mavrin, nicknamed "Mavrick" (Маврик), is a Russian musician and composer, who is credited as one of the best guitarists of the Russian metal scene. His music style combines heavy metal, progressive metal and hard rock, and is often dubbed "MavRock".

Stas Namin is a Russian rock musician and cult figure. He is one of the founders of Russian rock music, the creator and leader of the legendary band The Flowers, which has sold more than 60 million records on the territory of the USSR and Eastern Bloc countries over its half-century of existence, and the author of many popular songs including "Summer Evening", "Nostalgia for the Present" and "We Wish You Happiness!" Namin organized the country's first independent production company,, from which many Russian stars emerged, among them the rock band Gorky Park, which Namin created. He organized the country's first pop and rock festivals, including the 1989 Peace Festival at Luzhniki Stadium with world-class headliners, the One World and Rock from the Kremlin festivals and others; the founder of the country's first private enterprises, which broke the state monopoly and gave rise to the modern Russian show business; and the founder of Russia's first non-governmental symphony orchestra, the country's first Western-style musical theatre and other groups. 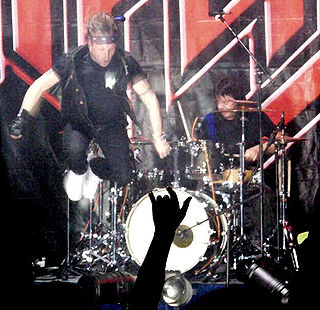 Artur Vyacheslavovich Mikheev, better known under his stage name Arthur Berkut, is a Russian singer. Throughout his career, he has participated in numerous bands, with the most notable being Autograph, Mavrik, and Aria. 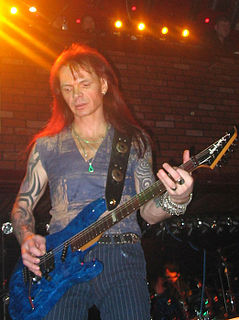 Spring Rhythms: Tbilisi-80 was a musical event held in Tbilisi, capital of the Georgian SSR, Soviet Union, from March 8 to March 16, 1980. It was the first official rock festival in the Soviet Union and is frequently considered the turning point in the history of Soviet and Russian rock music.

Arthur (Artashes) Meschian is an Armenian architect, musician, composer, poet, singer and painter. He is also known as one of the founders of Armenian rock. He was the founder and the lead singer of Apostles, the first rock band performing songs in their native language in the history of the Soviet Union. He is the author of different architectural projects, including Guest House and the new building of Matenadaran in Armenia. 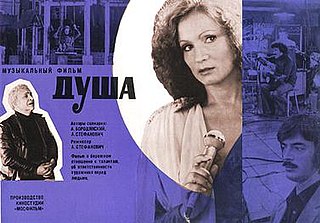 Leonid Mikhailovich Kharitonov was a Soviet and Russian bass-baritone singer. He was honored with People's Artist of the RSFSR and Honored Artist of RSFSR. In the West he was noted for his 1965 video of the The Song of the Volga Boatmen.

English rock singer Elton John played eight concerts in the Soviet Union – or formally, the Union of Soviet Socialist Republics (USSR) – between 21 and 28 May 1979. The two-city tour was a significant event amid Cold War tensions between the USSR and the West, and a sign of the Communist authorities' emerging tolerance towards Western popular culture. The shows were among the first performed in the USSR by a pop act, following visits by Cliff Richard and Boney M. Billboard magazine said that the shows were "significant and successful" and described John as "the first out-and-out rock artist to appear in the U.S.S.R."