In Western universities, a Bachelor of Divinity or Baccalaureate in Divinity (BD or BDiv; Latin : Baccalaureus Divinitatis) is an undergraduate or postgraduate academic degree awarded for a course taken in the study of divinity or related disciplines, such as theology or, rarely, religious studies.

At the University of Cambridge, the Bachelor of Divinity degree is considered senior to the university's PhD degree. [1]

In the Catholic universities the Bachelor of Sacred Theology (STB) is often called the Baccalaureate in Divinity (BD) and is treated as a postgraduate qualification.

At the University of Cambridge and previously at the University of Oxford, the BD is a postgraduate qualification, and applicants must have already completed an undergraduate degree before becoming a candidate for the degree. [3] The same principle applied at Oxford where the degree was closed to new registrations in 2005; BDs continue to be awarded to those registered before 2005. [4] Registration for Cambridge's BD is only open to senior graduates of that university. [5] The BD at Cambridge is the highest ranking bachelor's degree, and it is so senior that it outranks the PhD. [6] It requires a significant contribution to knowledge in the area of Christian theology, and is awarded based on published work, dissertation, or a combination of both. [7]

The University of Durham BD was of a similar nature, and available to graduates of seven years' standing. It was awarded on the basis of published work of a similar extent to a PhD – the usual basis for the award was a book. It is no longer awarded. St Mary's College at the University of St Andrews – where the main undergraduate award is the MTheol (Master of Theology) – offers the BD following a three-year course of study for graduates in other disciplines.

Heythrop College, a constituent college of the University of London, offered a BD course through the University of London International Programmes, which was not restricted to only members of the university. [8] Due to the closure of Heythrop College January 2019 the University of London itself provides academic direction for the Divinity programme as it continues to be offered through the International Programme. [9] The current (since 2021) London BD is a standard undergraduate degree in religious studies, unlike the more theologically Christian-orientated BDs of the others, where there are options for specialising in Christian theology or religious studies in general depending on module selection.

In Ireland, St. Patrick's College, Maynooth (Pontifical University) offer the Baccalaureate in Divinity (BD) degree to students who already have completed studies in theology or philosophy. [10] The Milltown Institute of Theology and Philosophy and most other Roman Catholic seminaries (Clonliffe College, Thurles, Carlow etc.), would also have awarded the BD degree.

Trinity College, Dublin, as it traditionally did for Church of Ireland clergy, offers a Bachelor in Divinity (BD) as a postgraduate degree; it is the highest ranking bachelor's degree and is so senior that it outranks all degrees but doctorates. It requires a significant contribution to knowledge in the area of Christian theology, and is awarded based on the completion of eight examination papers and a 40,000 word thesis within five years. [11]

The Presbyterian Union Theological College as part of Queen's University, Belfast also awards the Bachelor of Divinity as an undergraduate qualification. [12]

The Bachelor of Divinity degree offered in the region of South Asia by the affiliated colleges under the Senate of Serampore College is a graduate degree with post-graduate requirement for admission, in the sense that only graduates can register for BD. The university is going through change to adopt a three-year BD course with field-work and expand its accessibility through distance education, this will be considered as the essential degree for ordination in the diasporic Christian churches. Meanwhile, the university have implemented a five-year integrated and research oriented MDiv program with specializations.

At Moore Theological College in Sydney, Australia, the BD is classified as a post-graduate bachelor's degree in the sense that the normal entry requirement is completion of another bachelor's degree. The BD consists of four years of coursework in theology with an emphasis on biblical studies including original languages. The degree may be awarded with honours depending on grades and successful completion of a research component. [13] The BD is the basic qualification for ordination in the Anglican Diocese of Sydney. Similar courses of study (often only three years in duration) at comparable institutions in Australia have been reclassified as a Master's in Divinity.

The Master of Divinity has replaced the Bachelor of Divinity in most American seminaries as the first professional degree, since the latter title implies in the American academic system that it is on a par with a Bachelor of Arts or other basic undergraduate education.

Bachelor of Civil Law is the name of various degrees in law conferred by English-language universities. The BCL originated as a postgraduate degree in the universities of Oxford and Cambridge; at Oxford, the BCL continues to be the primary postgraduate taught course in law. It is also taught as an undergraduate degree in other countries. The reference to civil law was not originally in contradistinction to common law, but to canon law, although it is true that common law was not taught in the civil law faculties in either university until at least the second half of the 18th century. However, some universities in English-speaking countries use the degree in the former sense.

Bachelor of Laws is an undergraduate law degree in the United Kingdom and most common law jurisdictions. Bachelor of Laws is also the name of the law degree awarded by universities in the People's Republic of China, Hong Kong S.A.R., Macau S.A.R., Malaysia, India, Japan, Pakistan, Kenya, Ghana, Nigeria, South Africa, Botswana, Israel, Brazil, Tanzania, Zambia, and many other jurisdictions. 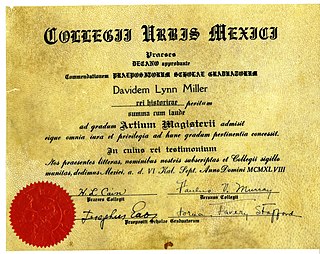 A diploma is a document awarded by an educational institution testifying the recipient has graduated by successfully completing their courses of studies. Historically, it has also referred to a charter or official document of diplomacy. 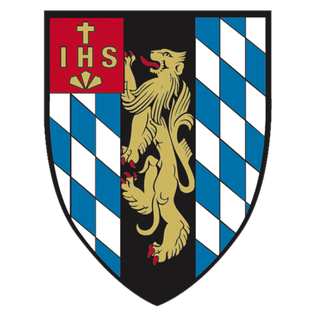 Heythrop College, University of London, was a constituent college of the University of London between 1971 and 2018, last located in Kensington Square, London. It comprised the university's specialist faculties of philosophy and theology with social sciences, offering undergraduate and postgraduate degree courses and five specialist institutes and centres to promote research. It had a close affiliation with the Roman Catholic Church, through the British Province of the Society of Jesus whose scholarly tradition went back to a 1614 exiled foundation in Belgium and whose extensive library collections it housed. While maintaining its denominational links and ethos the college welcomed all faiths and perspectives, women as well as men.

A licentiate is a degree similar to master's degree given by pontifical universities and by some universities in Europe, Latin America, and Syria. The term is also used for a person who holds this degree. The term derives from Latin licentia, "freedom", which is applied in the phrases licentia docendi meaning permission to teach and licentia ad practicandum signifying someone who holds a certificate of competence to practise a profession. Many countries have degrees with this title, but they may represent different educational levels.

The Cambridge Theological Federation (CTF) is an association of theological colleges, courses and houses based in Cambridge, England and founded in 1972. The federation offers several joint theological programmes of study open to students in member institutions; these programmes are either validated by or are taught on behalf either the University of Cambridge or Anglia Ruskin University. It also offers courses as part of the Common Award validated by Durham University.

In the universities of Oxford, Cambridge, and Dublin, Bachelors of Arts are promoted to the degree of Master of Arts or Master in Arts (MA) on application after six or seven years' seniority as members of the university. It is an academic rank indicating seniority, and not an additional postgraduate qualification. No further examination or study is required for this promotion and it is equivalent to undergraduate degrees awarded by other universities.

The degree of Master of Arts in Scotland typically refers to an undergraduate degree. The degree can be either a three-year general or four-year Honours degree in humanities or social sciences, awarded by one of several institutions.

D. S. Satyaranjan is a Silver Jubilee Pastor, a New Testament Scholar, and an Administrator who served as the Registrar of the Senate of Serampore College (University), the nation's first University {a University under Section 2 (f) of the University Grants Commission Act, 1956}) with degree-granting authority validated by a Danish Charter and ratified by the Government of West Bengal.

Elizabeth Denise Burns is a British philosopher of religion and academic. She was Dean of Undergraduate Studies at Heythrop College, University of London from 2003 to 2008, and lectures in Philosophy of Religion.

Hannibal Richard Cabral(Born 1955) was the former Principal of Karnataka Theological College, Mangalore, a Seminary established in 1965 and affiliated to the nation's first University, the Senate of Serampore College (University). Cabral was appointed by the College Council as Principal in 2009 as John Sadananda, then Principal, was elevated to the Bishopric of the Karnataka Southern Diocese of the Church of South India.

M. Mani Chacko is the present General Secretary of the Bible Society of India who was installed on 13 September 2011 at the CSI-St. Mark's Cathedral, Bangalore by the Bible Society of India Trust Association led by its President Navamani Elia Peter in the presence of a host of clergy, G. Dyvasirvadam, John S. Sadananda, G. D. V. Prasad, Robert R. Cunville, Joseph Mar Thoma, Ignatius Paul Pinto and others.

Sydney S. Salins is a New Testament Scholar who teaches at the Karnataka Theological College, Mangalore, a Seminary established in 1965 and affiliated to the nation's first University, the Senate of Serampore College (University).