A Doctor of Divinity (D.D. or DDiv; Latin : Doctor Divinitatis) is the holder of an advanced academic degree in divinity.

In the United Kingdom, it is considered an advanced doctoral degree. At the University of Oxford, doctors of divinity are ranked first in "academic precedence and standing", [1] while at the University of Cambridge they rank ahead of all other doctors in the "order of seniority of graduates". [2]

In some countries, such as in the United States, the degree of doctor of divinity is usually an honorary degree and not a research or academic degree.

Doctor of Divinity by country or church

In the United Kingdom and Ireland, the degree is a higher doctorate conferred by universities upon a religious scholar of standing and distinction, usually for accomplishments beyond the Ph.D. level. Bishops of the Church of England have traditionally held Oxford, Cambridge, Dublin, or Lambeth degrees making them doctors of divinity. At the University of Oxford, doctors of divinity are ranked first in "academic precedence and standing". [3] At the University of Cambridge, they rank ahead of all other doctors in the "order of seniority of graduates". [4]

Typically, an academic candidate will submit a collection of work which has been previously published in a peer-reviewed context and pay an examination fee. [5] The university then assembles a committee of academics both internal and external who review the work submitted and decide on whether the candidate deserves the doctorate based on the submission. Most universities restrict candidacy to graduates or academic staff of several years' standing.

In the United States, most doctors of divinity hold a degree conferred honoris causa by a church-related college, seminary, or university to recognize the recipient's achievements as a minister of religion. [6] For example, Martin Luther King Jr. graduated as a Ph.D. in systematic theology from Boston University in 1955 and subsequently received honorary doctor of divinity degrees from the Chicago Theological Seminary (1957), Boston University (1959), Wesleyan College (1964), and Springfield College (1964). [7] Billy Graham, who received honorary Doctor of Divinity degrees from The King's College and the University of North Carolina at Chapel Hill, was regularly addressed as "Dr. Graham", though his highest earned degree was a Bachelor of Arts degree in anthropology from Wheaton College. [8] [9]

Under federal law, a 1974 judgement accepted expert opinion that an "honorary doctor of divinity is a strictly religious title with no academic standing. Such titles may be issued by bona fide churches and religious denominations, such as plaintiff Universal Life Church, so long as their issuance is limited to a course of instruction in the principles of the church or religious denomination". [10] However, under the California Education Code, "an institution owned, controlled, and operated and maintained by a religious organization lawfully operating as a nonprofit religious corporation pursuant to Part 4 (commencing with Section 9110) of Division 2 of Title 1 of the Corporations Code" that offers "instruction... limited to the principles of that religious organization, or to courses offered pursuant to Section 2789 of Business and Professions Code" may confer "degrees and diplomas only in the beliefs and practices of the church, religious denomination, or religious organization" so long as "the diploma or degree is limited to evidence of completion of that education"; institutions "shall not award degrees in any area of physical science", while

any degree or diploma granted under this subdivision shall contain on its face ... a reference to the theological or religious aspect of the degree's subject area ... a degree awarded under this subdivision shall reflect the nature of the degree title, such as "associate of religious studies," "bachelor of religious studies," "master of divinity," or "doctor of divinity." [11]

In a 1976 interview with Morley Safer of the TV newsmagazine 60 Minutes , Universal Life Church founder Kirby J. Hensley professed that the church's honorary doctor of divinity degree was "...just a little piece of paper. And it ain't worth anything, you know, under God's mighty green Earth—you know what I mean?—as far as value." [12] In 2006, Universal Life Church minister Kevin Andrews advised potential degree recipients not to misrepresent the title as an educational achievement to employers, recommending instead that it would be appropriate to list such credentials "under the heading of Titles, Awards, or Other Achievements" on curricula vitae. [13]

As of 2009, 20 U.S. states and Puerto Rico had some form of exemption provision under which religious institutions can grant religious degrees without accreditation or government oversight. [lower-alpha 1] [14]

In the Roman Catholic Church, a doctor of divinity is usually the holder of an honorary degree, often conferred upon a bishop. [15] [16] In the pontifical university system, a holder of the highest earned degree in Catholic theology is styled "Doctor of Sacred Theology" (in Latin, Sacrae Theologiae Doctor, abbreviated STD).

Contrast with other religious degrees

The Doctor and Student

Christopher St. Germain's book The Doctor and Student (1528) describes a dialogue between a Doctor of Divinity and a law student in England containing the grounds of those laws together with questions and cases concerning the equity thereof. [18]

The system of academic degrees at the University of Oxford can be confusing to those not familiar with it. This is not merely because many degree titles date from the Middle Ages, but also because many changes have been haphazardly introduced in recent years. For example, the (medieval) BD, BM, BCL, etc. are postgraduate degrees, while the (modern) MPhys, MEng, etc. are integrated master's degrees, requiring three years of undergraduate study before the postgraduate year. 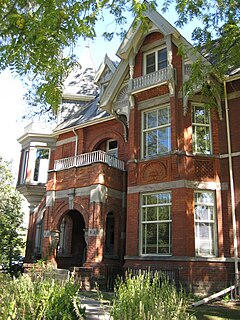 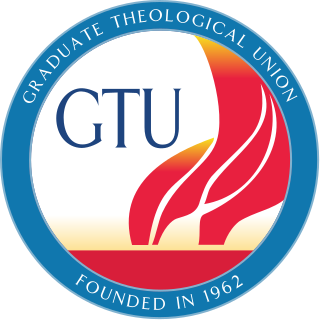 The Graduate Theological Union (GTU) is a consortium of eight private independent American theological schools and eleven centers and affiliates. Seven of the theological schools are located in Berkeley, California. The GTU was founded in 1962 and their students can take courses at the University of California, Berkeley. Additionally, some of the GTU consortial schools are part of other California universities such as Santa Clara University and California Lutheran University. Most of the GTU consortial schools are located in Berkeley area with the majority north of the campus in a neighborhood known as "Holy Hill" due to the cluster of GTU seminaries and centers located there.

A licentiate is an academic degree present in many countries, representing different educational levels. It may be similar to a master's degree when issued by pontifical universities and other universities in Europe, Latin America, and Syria.

In the universities of Oxford, Cambridge, and Dublin, Bachelors of Arts are promoted to the degree of Master of Arts or Master in Arts (MA) on application after six or seven years' seniority as members of the university. It is an academic rank indicating seniority, and not an additional postgraduate qualification, and within the universities there are in fact no postgraduate degrees which result in the postnominals 'MA'. No further examination or study is required for this promotion and it is equivalent to undergraduate degrees awarded by other universities.

Legum Doctor (LL.D.) or, in English, Doctor of Laws, is a doctorate-level academic degree in law or an honorary degree, depending on the jurisdiction. The double “L” in the abbreviation refers to the early practice in the University of Cambridge to teach both canon law and civil law, with the double “L” itself indicating the plural, although Cambridge now gives the degree the name Doctor of Law in English. This contrasts with the practice of the University of Oxford, where the degree that survived from the Middle Ages is the DCL or Doctor of Civil Law (only).

A Lambeth degree is an academic degree conferred by the Archbishop of Canterbury under the authority of the Ecclesiastical Licences Act 1533 (Eng) as successor of the papal legate in England. The degrees conferred most commonly are DD, DCL, DLitt, DMus, DM, BD and MA. The relatively modern degree of MLitt has been conferred in recent years, and the MPhil and PhD are now available. The degrees awarded are dependent on which of the two ancient universities, the Oxford or the Cambridge, the archbishop chooses as his model. This is also related to the nature of the academic dress used.

In Western universities, a Bachelor of Divinity or Baccalaureate in Divinity is a postgraduate academic degree awarded for a course taken in the study of divinity or related disciplines, such as theology or, rarely, religious studies.

The Australian College of Theology (ACT) is an Australian higher education provider based in Sydney, New South Wales. The college delivers awards in ministry and theology and was one of the first Australian non-university providers to offer an accredited bachelor's degree and a research doctorate. Over 22,000 people have graduated since the foundation of the college. It is a company limited by guarantee as of September 2007. On 7 October 2022 it was granted university college status by the Tertiary Education Quality and Standards Agency. 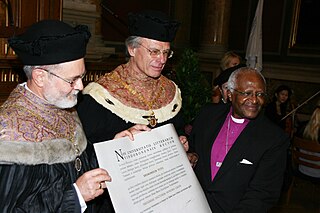 Doctor of Theology is a terminal degree in the academic discipline of theology. The ThD, like the ecclesiastical Doctor of Sacred Theology, is an advanced research degree equivalent to the Doctor of Philosophy.

The Master of Sacred Theology is a graduate-level, North American, academic degree in theology equivalent to ThM. The Roman Catholic equivalent is the Licentiate in Sacred Theology (STL). An honorary title of STM is also awarded within the Dominican Order.

There are a number of universities in Queensland, Australia, all with distinct academic dress.

An ordination mill is a religious organization or denomination in which membership is obtainable by trivial means and all members are qualified for self-ordination as a minister of religion, bishop, priest or deacon without any prerequisite training, work, experience, seminary study or other qualification. In some cases, ordination may be obtained online or by mail merely by submitting an application and a nominal fee.

There are three kinds of Seminaries in India: