Last updated January 08, 2021
Senior bishop of the Church of England
"Primate of All England" redirects here. For the Primate of England, see Archbishop of York.

The Archbishop of Canterbury is the senior bishop and principal leader of the Church of England, the symbolic head of the worldwide Anglican Communion and the diocesan bishop of the Diocese of Canterbury. The current archbishop is Justin Welby, who was enthroned at Canterbury Cathedral on 21 March 2013. Welby is the 105th in a line which goes back more than 1400 years to Augustine of Canterbury, the "Apostle to the English", sent from Rome in the year 597. Welby succeeded Rowan Williams. [1]

From the time of Augustine until the 16th century, the archbishops of Canterbury were in full communion with the See of Rome and usually received the pallium from the pope. During the English Reformation, the Church of England broke away from the authority of the pope. Thomas Cranmer became the first holder of the office following the English Reformation in 1533, while Reginald Pole was the last Roman Catholic in the position, serving from 1556 to 1558 during the Counter-Reformation. In the Middle Ages there was considerable variation in the methods of nomination of the archbishop of Canterbury and other bishops. At various times the choice was made by the canons of Canterbury Cathedral, the pope, or the king of England. Since the English Reformation, the Church of England has been more explicitly a state church and the choice is legally that of the Crown; today it is made by the reigning monarch on the advice of the Prime Minister, who in turn receives a shortlist of two names from an ad hoc committee called the Crown Nominations Commission.

In the last two of these functions, he has an important ecumenical and interfaith role, speaking on behalf of Anglicans in England and worldwide.

The archbishop's main residence is Lambeth Palace in the London Borough of Lambeth. He also has lodgings in the Old Palace, Canterbury, located beside Canterbury Cathedral, where the Chair of St Augustine sits.

As holder of one of the "five great sees" (the others being York, London, Durham and Winchester), the archbishop of Canterbury is ex officio one of the Lords Spiritual of the House of Lords. He is one of the highest-ranking men in England and the highest ranking non-royal in the United Kingdom's order of precedence.

In addition to his office, the archbishop also holds a number of other positions; for example, he is joint president of the Council of Christians and Jews in the United Kingdom. Some positions he formally holds ex officio and others virtually so (the incumbent of the day, although appointed personally, is appointed because of his office). Amongst these are: [5]

The archbishop is also a president of Churches Together in England (an ecumenical organisation). [7] Geoffrey Fisher, 99th Archbishop of Canterbury, was the first since 1397 to visit Rome, where he held private talks with Pope John XXIII in 1960. In 2005, Rowan Williams became the first archbishop of Canterbury to attend a papal funeral since the Reformation. He also attended the inauguration of Pope Benedict XVI. The 101st archbishop, Donald Coggan, was the first to attend a papal inauguration, that of Pope John Paul II in 1978. [8]

Since 2002, the archbishop has co-sponsored the Alexandria Middle East Peace process with the Grand Mufti of Egypt. In July 2008, the archbishop attended a conference of Christians, Jews and Muslims convened by the King of Saudi Arabia at which the notion of the "clash of civilizations" was rejected. Delegates agreed "on international guidelines for dialogue among the followers of religions and cultures." [9] Delegates said that "the deepening of moral values and ethical principles, which are common denominators among such followers, would help strengthen stability and achieve prosperity for all humans." [10]

It has been suggested that the Roman province of Britannia had four archbishops, seated at Londinium (London), Eboracum (York), Lindum Colonia (Lincoln) and Corinium Dobunnorum (Cirencester). [11] However, in the 5th and 6th centuries Britannia began to be overrun by pagan, Germanic peoples who came to be known collectively as the Anglo-Saxons. Of the kingdoms they created, Kent arguably had the closest links with European politics, trade and culture, because it was conveniently situated for communication with continental Europe. In the late 6th century, King Æthelberht of Kent married a Christian Frankish princess named Bertha, possibly before becoming king, and certainly a number of years before the arrival of the first Christian mission to England. [12] He permitted the preaching of Christianity. [13]

The first archbishop of Canterbury was Saint Augustine of Canterbury (not to be confused with Saint Augustine of Hippo), who arrived in Kent in 597 AD, having been sent by Pope Gregory I on a mission to the English. He was accepted by King Æthelbert, on his conversion to Christianity, about the year 598. It seems that Pope Gregory, ignorant of recent developments in the former Roman province, including the spread of the Pelagian heresy, had intended the new archiepiscopal sees for England to be established in London and York. [14] In the event, Canterbury was chosen instead of London, owing to political circumstances. [15] Since then the Archbishops of Canterbury have been referred to as occupying the Chair of St. Augustine.

A gospel book believed to be directly associated with St Augustine's mission survives in the Parker Library, Corpus Christi College, Cambridge University, England. Catalogued as Cambridge Manuscript 286, it has been positively dated to 6th century Italy and this bound book, the St Augustine Gospels, is still used during the swearing-in ceremony of new archbishops of Canterbury.

Before the break with papal authority in the 16th century, the Church of England was an integral part of the Western European church. Since the break the Church of England, an established national church, still considers itself part of the broader Western Catholic tradition (although this is not accepted by the Roman Catholic Church which regards Anglicanism as schismatic [16] and does not accept Anglican holy orders as valid) as well as being the "mother church" of the worldwide Anglican Communion.

The Report of the Commissioners appointed by his Majesty to inquire into the Ecclesiatical Revenues of England and Wales (1835) noted the net annual revenue for the Canterbury see was £19,182. [17]

Province and Diocese of Canterbury

Along with primacy over the Archbishop of York, the Archbishop of Canterbury also has a precedence of honour over the other bishops of the Anglican Communion. He is recognised as primus inter pares, or first amongst equals. He does not, however, exercise any direct authority in the provinces outside England, except in certain minor roles dictated by Canon in those provinces (for example, he is the judge in the event of an ecclesiastical prosecution against the Archbishop of Wales). He does hold metropolitical authority over several extra-provincial Anglican churches, and he serves as ex officio Bishop of the Falkland Islands.

At present the archbishop has three suffragan bishops:

The Bishop of Maidstone was previously a second actual suffragan bishop working in the diocese, until it was decided at the diocesan synod of November 2010 that a new bishop will not be appointed. [19]

"Primate of All England" redirects here.

The surname of the Archbishop of Canterbury is not always used in formal documents; often only the first name and see are mentioned. The archbishop is legally entitled to sign his name as "Cantuar" (from the Latin for Canterbury). The right to use a title as a legal signature is only permitted to bishops, Peers of the Realm and peers by courtesy. The current archbishop of Canterbury usually signs as "+Justin Cantuar:".

In the English and Welsh order of precedence, the Archbishop of Canterbury is ranked above all individuals in the realm, with the exception of the Sovereign and members of the Royal Family. [20] Immediately below him is the Lord Chancellor and then the Archbishop of York.

The Archbishop of Canterbury's official residence in London is Lambeth Palace. He also has a residence, named The Old Palace, next to Canterbury Cathedral on the site of the medieval Archbishop's Palace. The archbishops had palaces on the periphery of London and on the route between London and Canterbury.

Former palaces of the archbishops include

Since 1900, the following have served as Archbishop of Canterbury: [21]

Randall Davidson was the first to voluntarily resign his office in 1928, two years before his death. All his successors (except William Temple) have also resigned their office before death, and consequently received a peerage.

The Lambeth Conference is a decennial assembly of bishops of the Anglican Communion convened by the Archbishop of Canterbury. The first such conference took place in 1867.

The formal history of the Church of England is traditionally dated by the Church to the Gregorian mission to England by Augustine of Canterbury in AD 597. As a result of Augustine's mission, and based on the tenets of Christianity, Christianity in England fell under control or authority of the Pope. This gave him the power to appoint bishops, preserve or change doctrine, and/or grant exceptions to standard doctrine.

The Province of Canterbury, or less formally the Southern Province, is one of two ecclesiastical provinces which constitute the Church of England. The other is the Province of York. It consists of 30 dioceses, covering roughly two-thirds of England, parts of Wales, and the Channel Islands, with the remainder comprising continental Europe. 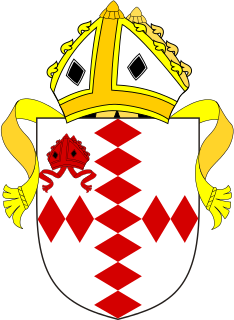 The history of the Anglican Communion may be attributed mainly to the worldwide spread of British culture associated with the British Empire. Among other things the Church of England spread around the world and, gradually developing autonomy in each region of the world, became the communion as it exists today.

St Augustine’s College in Canterbury, Kent, United Kingdom, was located within the precincts of St Augustine's Abbey about 0.2 miles ESE of Canterbury Cathedral. It served first as a missionary college of the Church of England (1848-1947) and later as the Central College of the Anglican Communion (1952-1967).

The Chair of St Augustine or Cathedra Augustini (Latin) is the ceremonial enthronement cathedra chair of the Archbishop of Canterbury in Canterbury Cathedral, Kent. 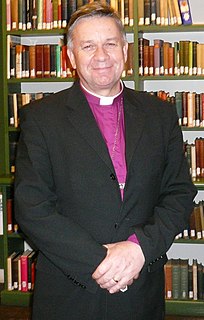 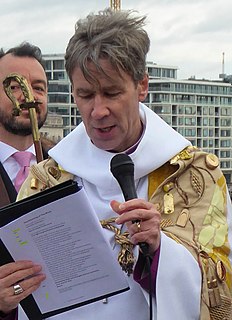 Josiah Atkins Idowu-Fearon is a Nigerian Anglican bishop. Since 2015, he has been Secretary General of the Anglican Consultative Council. He was previously the Bishop of Kaduna diocese and the Archbishop of the Province of Kaduna in the Church of Nigeria.