A provincial episcopal visitor (PEV), popularly known as a flying bishop, is a Church of England bishop assigned to minister to many of the clergy, laity and parishes who on grounds of theological conviction, [1] "are unable to receive the ministry of women bishops or priests". [2] The system by which such bishops oversee certain churches is referred to as alternative episcopal oversight (AEO). [3]

The Church of England ordained its first women priests in 1994. According to acts of the General Synod passed the previous year (Priests (Ordination of Women) Measure 1993), if a parish does not accept the ministry of women priests it can formally request that none be appointed to minister to it. Via the Episcopal Ministry Act of Synod 1993, if the local bishop has participated in the ordination of women as priests, a parish can request to be under the pastoral and sacramental care of another bishop who has not participated in such ordinations. [4] In such a case the parish still remains in the diocese of the local diocesan bishop, at whose invitation the "flying bishop" makes his visitation.

On 4 December 2014, it was announced that the see of Maidstone would be filled again in order to provide a further provincial episcopal visitor for particular conservative evangelical members of the Church of England who take a complementarian view on headship. [5]

The act empowers the metropolitans of the Church of England's two provinces to appoint provincial episcopal visitors as suffragan bishops whose main purpose is to be available for such visits to parishes across the province. Accordingly, four PEV bishops have been appointed across the two provinces.

In the Province of Canterbury:

In the Province of York:

As of 1 April 2015 [update] , the Bishop of Beverley ministered in 10 of the 12 dioceses in the northern province. The other two dioceses use different suffragan bishops:

Until the appointment of Paul Ferguson in 2014, the Bishop of Whitby provided AEO in York diocese; with Ferguson's appointment that oversight lapses to the Bishop of Beverley as PEV. [15] Following the retirement of John Goddard, Bishop of Burnley, on 19 July 2014, it was announced that Philip North would be consecrated as the next Bishop of Burnley on 2 February 2015 and would have AEO in the dioceses of Blackburn and Carlisle; however, while North is now listed as the AEO bishop for Blackburn diocese, Webster is listed for Carlisle. [16]

As of 2016 [update] , in the southern province, the bishops of Ebbsfleet and of Richborough together ministered in 27 of the 30 dioceses. Of the three remaining dioceses, London and Southwark were ministered to by the Bishop of Fulham and Chichester by its diocesan bishop. The Bishop of Ebbsfleet served the western 13 dioceses (Bath and Wells, Birmingham, Bristol, Coventry, Derby, Exeter, Gloucester, Hereford, Lichfield, Oxford, Salisbury, Truro and Worcester) [17] while the Bishop of Richborough served the eastern half (Canterbury, Chelmsford, Ely, Europe, Guildford, St Edmundsbury & Ipswich, Leicester, Lincoln, Norwich, Peterborough, Portsmouth, Rochester, St Albans and Winchester). [18]

By January 2018, 114 parishes had passed resolutions for conservative evangelical reasons; 53 of these had requested AEO from the Bishop of Maidstone. [19] Rod Thomas is an assistant bishop in the Dioceses of Birmingham, Bristol, Carlisle, Chelmsford, Chester, Derby, Ely, London, Manchester, Norwich, Portsmouth, Rochester, Sheffield and Southwark. [19] [20] [21] [22] [23]

The resignation of Jonathan Goodall as bishop of Ebbsfleet, and the retirement of the Bishop of Beverley, has left two of the four flying bishop appointments vacant. It was suggested by church insiders that fewer candidates were becoming available for the posts as female clergy had become accepted by the vast majority of churchgoers. [7] In June 2022, it was announced that, from January 2023, oversight of traditionalist Catholics in the west of Canterbury province (formerly the Bishop of Ebbsfleet's area) would be taken by a new Bishop of Oswestry, suffragan to the Bishop of Lichfield; while oversight of conservative Evangelicals would be taken by the next Bishop of Ebbsfleet; the See of Maidstone would be left vacant, available for other uses. [8]

In the Church in Wales, David Thomas was appointed to the comparable office of Provincial Assistant Bishop in 1996 when the province voted to ordain women to the priesthood. No successor was appointed when Thomas retired in 2008. [24]

The Diocese of Carlisle was created in 11 April 1132 by Henry I out of part of the Diocese of Durham, although many people of Cumbric descent in the area looked to Glasgow for spiritual leadership. The first bishop was Æthelwold, who was the king's confessor and became prior of the Augustinian priory at Nostell in Yorkshire. Carlisle was thus the only cathedral in England to be run by Augustinians instead of Benedictines. This only lasted until the reign of Henry III however, when the Augustinians in Carlisle joined the rebels who temporarily handed the city over to Scotland and elected their own bishop. When the revolt was ended, the Augustinians were expelled. 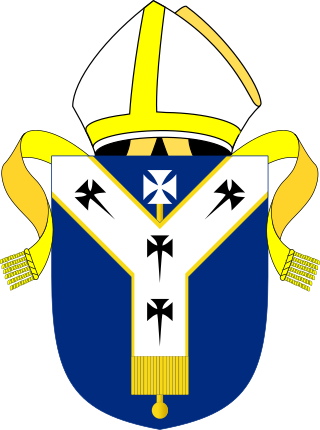 The Bishop of Fulham is a suffragan bishop in the Diocese of London in the Church of England. The bishopric is named after Fulham, an area of south-west London; the see was erected under the Suffragans Nomination Act 1888 by Order in Council dated 1 February 1926. 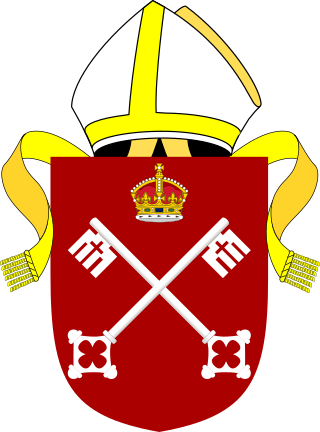 The Diocese of Chelmsford is a Church of England diocese, part of the Province of Canterbury. The diocese covers Essex and the five East London boroughs of Barking and Dagenham, Havering, Newham, Redbridge, and Waltham Forest, and is co-terminous with the boundaries of the Catholic Diocese of Brentwood. It is divided into three episcopal areas, each with its own area bishop. The diocese covers a region of around 1,500 square miles (3,900 km2) and has a population of more than 3 million; it has 463 parishes and a total of 588 churches; it is the second largest Anglican diocese in England.

The Bishop of Whitby is an episcopal title used by a suffragan bishop of the Church of England Diocese of York, in the Province of York, England. The title takes its name after the town of Whitby in North Yorkshire; the See was erected under the Suffragans Nomination Act 1888 by Order in Council dated 30 July 1923. The Bishop of Whitby oversees the Archdeaconry of Cleveland. On 3 July 2014 Paul Ferguson was consecrated as Bishop of Whitby.

The Bishop of Ebbsfleet is a suffragan bishop who fulfils the role of a provincial episcopal visitor in the Church of England. From its creation in 1994 to 2022, the Bishop of Ebbsfleet served conservative Anglo-Catholic parishes that reject the ordination of women as priests and bishops. From 2023, the bishop will serve conservative evangelical parishes that reject the ordination and/or leadership of women due to complementarian beliefs.

The Bishop of Beverley is a Church of England suffragan bishop. The title takes its name after the town of Beverley in the East Riding of Yorkshire, England.

Jonathan Michael Goodall is a British Roman Catholic priest and a former Church of England bishop. From 2013 to 2021, he was Bishop of Ebbsfleet, a suffragan bishop who is the provincial episcopal visitor in the western half of the Province of Canterbury for those "within the spectrum of Anglican teaching and tradition" who are "unable to receive the ministry of women as bishops or priests". He was ordained a Catholic priest on 12 March 2022.

Roderick Charles Howell Thomas is a retired Church of England bishop. He was the Bishop of Maidstone, a provincial episcopal visitor for conservative evangelical members and parishes of the church, from 2015 until his retirement in 2022.

The Bishop of Oswestry is a suffragan bishop of the Diocese of Lichfield who fulfils the role of a provincial episcopal visitor in the Church of England.

Paul Richard Thomas is a British Anglican bishop who has served as Bishop of Oswestry, a suffragan bishop in the Diocese of Lichfield and the provincial episcopal visitor for the western half of the Province of Canterbury since February 2023. From 2011, he was vicar of St James's Church, Paddington.