Last updated November 09, 2022
Latitudarian churchmanship in Anglicanism, particularly in the Church of England
This article is about the stream of Anglican churchmanship. For the British television series, see Broadchurch.

After the terms high church and low church came to distinguish the tendency toward ritualism and Anglo-Catholicism on the one hand and evangelicalism on the other, those Anglicans tolerant of multiple forms of conformity to ecclesiastical authority came to be referred to as "broad". The expression apparently originated with A. H. Clough and was current in the later part of the 19th century for Anglicans who objected to positive definitions in theology and sought to interpret Anglican formularies in a broad and liberal sense. [1] Characteristic members of this group were the contributors to Essays and Reviews, 1860, and A. P. Stanley. [2] As the name implies, parishes associated with this variety of churchmanship will mix high and low forms, reflective of the often eclectic liturgical and doctrinal preferences of clergy and laity. The emphasis is on allowing individual parishioners' choice.

Broad church as an expression is now increasingly replaced by references in the Church of England to liberalism. For example, Rowan Williams, the former archbishop of Canterbury, in his "text of reflection" The Challenge and Hope of Being an Anglican Today, released in 2006, [3] described the three "components in our heritage" as "strict evangelical Protestantism", "Roman Catholicism" and "religious liberalism", accepting that "each of these has a place in the church’s life". These would broadly correspond to the low church, high church and broad church parties in the Church of England. It has been suggested that "broad" tended to be used to describe those of middle of the road liturgical preferences who leaned theologically towards liberal Protestantism; whilst "central" described those who were theologically conservative, but took the middle way in terms of liturgical practices. Broad churchmen might best be described as those who are generally liberal in theology, often culturally conservative, but also supportive of a broad—that is, comprehensive—Anglican Church including Evangelical Anglicans, "middle of the road" or "vanilla Anglicans" or "central churchmen", liberal or "progressive" Anglicans, moderate high churchmen, and Anglo-Catholic Anglicans (though not fundamentalist on the one extreme nor papalists on the other). It is not possible to draw sharp lines between some of these traditions.

In The Episcopal Church in the United States, the term "broad church" has a slightly different connotation, referring to those whose liturgical practice is neither high nor low church.[ citation needed ] Theologically, they may be either conservative—equating to central churchmanship in the Church of England—or liberal, which would identify them with the broad church or liberal strand within the Church of England.

By way of an analogy, the term has also been used with regard to political parties, particularly Labour in the UK but also more recently the Conservative MP's too. It can denote both a wide range of ideological views within a single organisation, as well as describe a party that seeks to attract a wide voter base with differing points of view. [4] [5] "Big tent" is a similar term in American politics, also with religious origins. [6] In more recent times when an MP uses this analogy, it invariably means there is trouble from certain factions of the party and some MP's are not happy, so they describe the party as a 'Broad Church' as a way of trying to deflect or cover it up.

Look up broad church in Wiktionary, the free dictionary.

Anglicanism is a Western Christian tradition that has developed from the practices, liturgy, and identity of the Church of England following the English Reformation, in the context of the Reformation in Europe. It is one of the largest branches of Christianity, with around 110 million adherents worldwide as of 2001.

In English church history, the Nonconformists, also known as a Free Church person, are Protestant Christians who did not "conform" to the governance and usages of the established church, the Church of England. Use of the term in England was precipitated after the Restoration of the Stuart monarchy in 1660, when the Act of Uniformity 1662 renewed opposition to reforms within the established church. By the late 19th century the term specifically included other Reformed Christians, plus the Baptists, Brethren, Methodists, and Quakers. The English Dissenters such as the Puritans who violated the Act of Uniformity 1559 – typically by practising radical, sometimes separatist, dissent – were retrospectively labelled as Nonconformists. 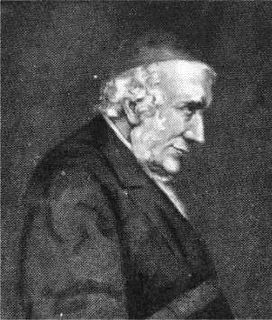 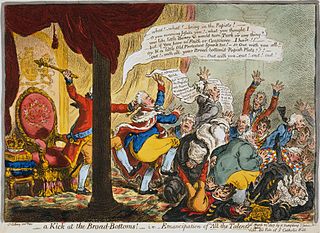 The words Popery and Papism are mainly historical pejorative words in the English language for Roman Catholicism, frequently used by Protestants and Eastern Orthodox Christians to label their Roman Catholic opponents, who differed from them in accepting the authority of the Pope over the entire Earth as per the Catholic councils and decrees. The words were popularised during the English Reformation (1532–1559), when the Church of England broke away from the Roman Catholic Church and divisions emerged between those who rejected Papal authority and those who continued to follow Rome. The words are recognised as pejorative; they have been in widespread use in Protestant writings until the mid-nineteenth century, including use in some laws that remain in force in the United Kingdom.

The term high church refers to beliefs and practices of Christian ecclesiology, liturgy, and theology that emphasize formality and resistance to modernisation. Although used in connection with various Christian traditions, the term originated in and has been principally associated with the Anglican tradition, where it describes churches using a number of ritual practices associated in the popular mind with Roman Catholicism and Eastern Orthodoxy. The opposite tradition is low church. Contemporary media discussing Anglican churches erroneously prefer the terms evangelical to low church and Anglo-Catholic to high church, even though their meanings do not exactly correspond. Other contemporary denominations that contain high church wings include some Lutheran, Presbyterian, and Methodist churches.

In Anglican Christianity, low church refers to those who give little emphasis to ritual. The term is most often used in a liturgical sense, denoting a Protestant emphasis, whereas "high church" denotes an emphasis on ritual, often Anglo-Catholic.

Churchmanship is a way of talking about and labelling different tendencies, parties, or schools of thought within the Church of England and the sister churches of the Anglican Communion. 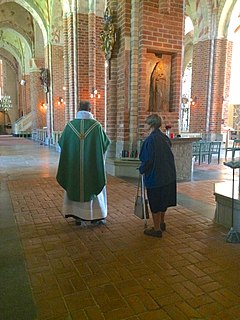 High church Lutheranism is a movement that began in 20th-century Europe and emphasizes worship practices and doctrines that are similar to those found within both Roman Catholicism and Eastern Orthodoxy and the Anglo-Catholic wing of Anglicanism. In the more general usage of the term, it describes the general high church characteristics of Lutheranism in the Nordic countries such as Sweden, Finland, Estonia and Latvia. The mentioned countries, once a part of the Swedish Empire, have more markedly preserved Catholic traditions.

Branch theory is an ecclesiological proposition that the One, Holy, Catholic, and Apostolic Church includes various Christian denominations whether in formal communion or not. The theory is often incorporated in the Protestant notion of an invisible Christian Church structure binding them together.

Central churchmanship describes those who adhere to a middle way in the Anglican Communion of the Christian religion and other Anglican church bodies, being neither markedly high church/Anglo-Catholic nor low church/evangelical Anglican in their doctrinal views and liturgical preferences. The term is used much less frequently than some others. 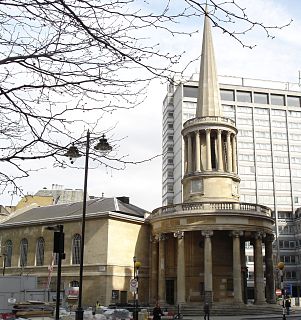