Badger's Green is a 1934 British comedy film directed by Adrian Brunel and starring Valerie Hobson, Bruce Lester, David Horne and Wally Patch. It was adapted from the 1930 play Badger's Green by R.C. Sheriff. A picturesque village is threatened with redevelopment by a speculative builder, leading to widespread protest. In the end the builder agrees to settle the future of the village on the result of a cricket match. [1]

It was produced at the British & Dominions Film Corporation at Elstree Studios as a quota quickie for distribution by Paramount Pictures to allow them to comply with the terms of the annual quota. Badger's Green is currently missing from the BFI National Archive, and is listed as one of the British Film Institute's "75 Most Wanted" lost films. [2] The story was later remade for the 1949 film Badger's Green , which does survive.

Hobson's Choice is a 1931 British comedy drama film directed by Thomas Bentley and starring James Harcourt, Viola Lyel, Frank Pettingell and Herbert Lomas. Based on the play Hobson's Choice by Harold Brighouse, it follows the tale of a coarse bootshop owner who becomes outraged when his eldest daughter decides to marry a meek cobbler. It was produced by the leading British company of the time, British International Pictures, at their studios in Elstree. 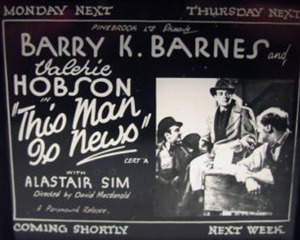 This Man is News is a 1938 British comedy mystery film directed by David MacDonald and starring Barry K. Barnes, Valerie Hobson, Alastair Sim and Edward Lexy. The screenplay concerns a journalist who solves a crime of which he himself is suspected. A "quota quickie", it was made for a mere £6,000, but "was among the highest grossing films of 1938". 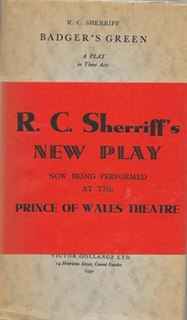 Badger's Green is a 1930 British comedy play written by R.C. Sheriff. A company has ambitious plans to redevelop the quiet, picturesque village of Badger's Green. The inhabitants mount a resistance campaign and it is eventually decided to settle the future of the village by playing a cricket match.

Hail and Farewell is a 1936 British comedy film directed by Ralph Ince and starring Claude Hulbert. The film was a quota quickie production, following the escapades of a group of British sailors during six hours' shore leave in Southampton. More specific plot details are unknown, as there is no evidence of the film being shown after its first run, the British Film Institute has been unable to locate a print for inclusion in the BFI National Archive, and the film is classified as "missing, believed lost".

Adrian Brunel was an English film director and screenwriter. Brunel's directorial career started in the silent era, and reached its peak in the latter half of the 1920s. His surviving work from the 1920s, both full-length feature films and shorts, is highly regarded by silent film historians for its distinctive innovation, sophistication and wit. With the arrival of talkies, Brunel's career ground to a halt and he was absent from the screen for several years before returning in the mid-1930s with a flurry of quota quickie productions, a majority of which are now classed as lost. Brunel's last credit as director was in a 1940 wartime propaganda short film, although he worked for a few years more as a "fixer-up" for films directed or produced by friends in the industry.

Castle Sinister was a 1932 British horror film produced, written and directed by Widgey R. Newman. Very little is known of either the film or the director, although available information suggests Newman to have been something of a maverick in the British film industry of the time. Castle Sinister is classed as a lost film.

The Public Life of Henry the Ninth is a 1935 British comedy film directed by Bernard Mainwaring and starring Leonard Henry, Betty Frankiss, and George Mozart. This film was the first film made by Hammer Productions, and was Henry's film debut. It is set largely in the bar of the Henry VIII public house, with the title alluding to the 1933 Oscar-winning film The Private Life of Henry VIII.

Golden Madonna is a 1949 British-Italian drama film directed by Luigi Carpentieri and Ladislao Vajda and starring Phyllis Calvert, Tullio Carminati and Michael Rennie. It was considered a lost film and was on the BFI 75 Most Wanted list, until a copy was loaned to the British Film Institute by Cohen Media. Filmed on location, a group of original negatives and contact prints taken by Francis Goodman are in the possession of London's National Portrait Gallery.

The Village Squire is a 1935 British comedy film directed by Reginald Denham and starring David Horne, Leslie Perrins, Moira Lynd and Vivien Leigh making her screen debut. It is based on Arthur Jarvis Black's play. The screenplay concerns a village's amateur production of MacBeth that is aided by the arrival of a Hollywood star. This provokes the fierce resistance of the village squire who hates films. The film was a quota quickie, produced at Elstree Studios for Paramount to help them meet their yearly quota set down by the British government.

Holiday's End is a 1937 British mystery film directed by John Paddy Carstairs and starring Sally Stewart, Rosalyn Boulter and Wally Patch. The film follows the arrival at boarding school of a boy king.