It collects, preserves, restores, and shares the films and television programmes which have helped to shape and record British life and times since the development of cine film in the late 19th century. The majority of the collection is British originated material, but it also features internationally significant holdings from around the world. The Archive also collects films which feature key British actors and the work of British directors.

The collections themselves are accommodated on several sites. The J. Paul Getty, Jr. Conservation Centre in Berkhamsted, Hertfordshire, named after its benefactor, is the base for much of the restoration work, while approximately 140 million feet of unstable nitrate film and all the master film collection held on acetate or other media is kept separately at a BFI storage site at Gaydon in Warwickshire.

Film preservation is an ongoing project among filmmakers, historians, archivists, museums, and nonprofit organisations to rescue deteriorating film stock and preserve the recorded image. In recent years the BFI National Archive has completed a number of much anticipated restorations of a diverse range of film titles. This has included the Mitchell and Kenyon collection, which consists almost entirely of actuality films commissioned by travelling fairground operators for showing at local fairgrounds or other venues across the UK in the early part of the twentieth century.

Other notable recent restorations include:

The collection now known as the BFI National Archive was founded as the National Film Library in 1935 by Ernest Lindgren, who was the first curator. The BFI National Archive now comprises over 275,000 titles in total consisting of feature, non-fiction, short films (dating from 1894), 210,000 television programmes and some artists' films. It is one of the largest film collections in the world. Notable collections include:

The archive holds 20,000 silent films including, Cecil Hepworth's Alice in Wonderland (1903), and actively collects artists' moving images. In addition to moving image materials the Special Collections hold the records of filmmakers and institutions. Significant collections include:

Films and television programmes are acquired mainly by donation or, in the case of independent television, via funding direct from the TV companies. Emphasis is placed on British productions but whenever possible important and popular movies from overseas are also acquired. Films from the Archive have also acted as material for the BFI's programme of artists' moving image commissions, most notably through the programme of the BFI Gallery, the contemporary art space dedicated to artists' moving image active at BFI Southbank between 2007 and 2011, including Patrick Keiller, Deimantas Narkevicious, Iain Forsyth & Jane Pollard, Susan Pui San Lok. [1] [2] 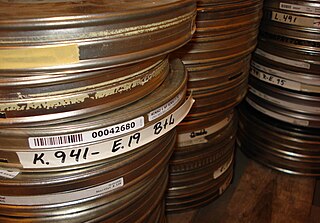 Film preservation, or film restoration, describes a series of ongoing efforts among film historians, archivists, museums, cinematheques, and non-profit organizations to rescue decaying film stock and preserve the images they contain. In the widest sense, preservation assures that a movie will continue to exist in as close to its original form as possible.

The Mitchell & Kenyon film company was a pioneer of early commercial motion pictures based in Blackburn in Lancashire, England, at the start of the 20th century. They were originally best known for minor contributions to early fictional narrative film and Boer War dramatisation films, but the discovery in 1994 of a hoard of film negatives led to restoration of the Mitchell & Kenyon Collection, the largest surviving collection of early non-fiction actuality films in the world. This collection provides a fresh view of Edwardian era Britain and is an important resource for historians. 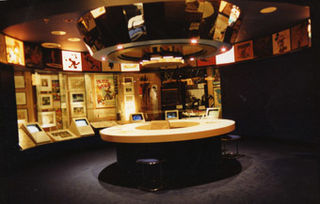 The Museum of the Moving Image (MOMI) was a museum of the history of cinema technology and media sited below Waterloo Bridge in London. It was opened on 15 September 1988 by Prince Charles. The museum formed part of the cultural complex on the South Bank of the River Thames. MOMI was mainly funded by private subscription and operated by the British Film Institute. MOMI was closed in 1999, initially on a supposedly temporary basis, and with the intention of its being relocated to Jubilee Gardens nearby. Its permanent closure was announced in 2002.

The International Federation of Film Archives was founded in Paris in 1938 by the Cinémathèque Française, the Reichsfilmarchiv in Berlin, the British Film Institute and the Museum of Modern Art in New York City.

The National Center for Jewish Film is a non-profit motion picture archive, distributor, and resource center. It houses the largest collection of Jewish-themed film and video outside of Israel. Its mission is to collect, restore, preserve, catalogue, and exhibit films with artistic and educational value relevant to the Jewish experience, and to disseminate these materials to the widest possible audience.

The North East Film Archive (NEFA) is a not-for-profit organisation which exists to collect, preserve and provide access to film, television and other moving image material related to the history of a region of England, which is defined as the Tees Valley area and the counties of Durham, Northumberland and Tyne and Wear.

Ernest Lindgren was a British film archivist and writer.

Patrick Keiller is a British film-maker, writer and lecturer.

The conservation and restoration of new media art is the study and practice of techniques for sustaining new media art created using from materials such as digital, biological, performative, and other variable media.

An orphan film is a motion picture work that has been abandoned by its owner or copyright holder; also, any film that has suffered neglect.

John Akomfrah is a British artist, writer, film director, screenwriter, theorist and curator of Ghanaian descent, whose "commitment to a radicalism both of politics and of cinematic form finds expression in all his films".

Iain Forsyth and Jane Pollard are British artists and filmmakers.

BBC Archives are collections documenting the BBC's broadcasting history, including copies of television and radio broadcasts, internal documents, photographs, online content, sheet music, commercially available music, BBC products, press cuttings, artifacts and historic equipment. The original contents of the collections are permanently retained but are in the process of being digitised. Some collections are being uploaded to the BBC Archives section of the BBC Online website for visitors to view. The archive is one of the largest broadcast archives in the world, with over 15 million items.

BFI Southbank is the leading repertory cinema in the UK, specialising in seasons of classic, independent and non-English language films. It is operated by the British Film Institute.

The Association of European Cinematheques is an affiliation of 49 European national and regional film archives founded in 1991. Its role is to safeguard the European film heritage and make this rich audiovisual records collected and preserved by the various film archives accessible to the public. ACE is a regional branch of FIAF Fédération Internationale des Archives du Film / International Federation of Film Archives. ACE members are non-profit institutions committed to the FIAF Code of Ethics.

Unlocking Film Heritage (UFH) was one of the biggest film digitisation projects ever undertaken and it encompassed the BFI National Archive together with national and regional audiovisual archival institutions in United Kingdom. Between 2013–2017 around 10,000 titles, capturing 120 years of Great Britain on film, were digitised and made free-to-access in a variety of ways. Many archival clips can be watched for free online via BFI Player.