Film4 Productions is a British film production company owned by Channel Four Television Corporation. The company has been responsible for backing many films made in the United Kingdom. The company's first production was Walter , directed by Stephen Frears, which was released in 1982. It is especially known for its gritty, kitchen sink-style films and period drama.

Prior to 1998, the company was identified as Channel Four Films or FilmFour International. Later, the outfit was re-branded as FilmFour, to coincide with the launch of a new Digital TV channel of the same name. The company cut its budget and staff significantly in 2002, due to mounting losses, and was reintegrated into the drama department of Channel 4. The name "Film4 Productions" was introduced in 2006 to tie in with the relaunch of the FilmFour broadcast channel as Film4.[ citation needed ]

This is a list of the most notable productions by Film4.

BBC One is the first flagship television network of the British Broadcasting Corporation (BBC) in the United Kingdom, Isle of Man and Channel Islands. It was launched on 2 November 1936 as the BBC Television Service, and was the world's first regular television service with a high level of image resolution. It was renamed BBC TV in 1960, using this name until the launch of the second BBC channel BBC2 in 1964, whereupon the BBC TV channel became known as BBC1, with the current spelling adopted of BBC One in 1997. 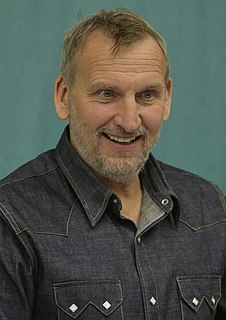 Christopher Eccleston is an English actor. The recipient of an Emmy Award and two BAFTA Award nominations, Eccleston is best known for his work on television and in film – in particular for his collaborations with directors Danny Boyle and Michael Winterbottom and writers Peter Flannery, Jimmy McGovern and Russell T. Davies.

Film4 is a British free-to-air television channel owned by the Channel Four Television Corporation, that broadcasts films. It was launched on 1 November 1998. While its standard-definition channel is available as a FTA network, its high-definition variant is offered as a pay television service.

Kudos is a British film and television production company. It has produced television series for the BBC, ITV, Channel 4, Sky, Amazon and Netflix and its productions include Tin Star, Humans, Broadchurch, The Tunnel, Grantchester, Apple Tree Yard, Utopia,Spooks (US:MI5), Hustle and Life on Mars. In 2007 it was voted Best Independent Production Company by Broadcast magazine. Formed in 1992, since 2007 it has been part of the Shine Group. In 2007 it also set up the film unit, Kudos Pictures. In 2011, the Shine Group was 100% acquired by News Corporation and was part of the 50-50 joint-venture Endemol Shine Group. On 3 July 2020, France-based Banijay Group bought the studio through former's acquisition of Endemol Shine Group. 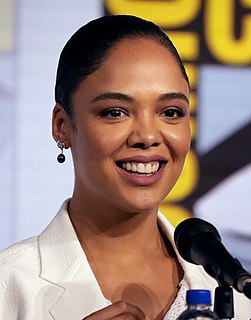 Tessa Lynne Thompson is an American actress, producer, singer, and songwriter. She began her professional acting career with the Los Angeles Women's Shakespeare Company while studying at Santa Monica College. She appeared in productions of The Tempest and Romeo and Juliet, the latter of which earned her a NAACP Theatre Award nomination. Her breakthrough came with leading roles in Tina Mabry's independent drama film Mississippi Damned (2009) and Tyler Perry's drama film For Colored Girls (2010).

Christine Langan is an English film producer who was appointed Head of BBC Films in 2009. In 2016, she left the role to become CEO of comedy television production company Baby Cow Productions.

Andrew Harries is chief executive and co-founder of Left Bank Pictures, a UK based production company formed in 2007. In a career spanning four decades he has produced television dramas including The Royle Family,Cold Feet, the revivals of Prime Suspect and Cracker, as well as the BAFTA-winning television play The Deal.

David Abraham is a British media executive, who is the ex-chief executive of Channel 4 Television Corporation. In 1997 he co-founded the creative agency St. Luke’s. Abraham then went on to senior creative roles at Discovery Communications in the UK and the US before becoming CEO of UKTV in 2007 and then CEO of Channel 4 from 2010 to 2017. 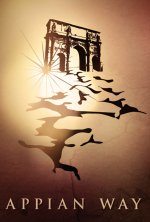 Appian Way Productions is a Los Angeles based film and television production company founded by actor and producer Leonardo DiCaprio. Jennifer Davisson serves as President of Production. Since its launch, Appian Way has released a diverse slate of films, including Alejandro Iñárritu’s three-time Academy Award and Golden Globe winner The Revenant, Martin Scorsese’s Academy Award and Golden Globe nominated The Wolf of Wall Street and Academy Award nominated and Golden Globe winning The Aviator, along with Shutter Island, Scott Cooper’s Out of the Furnace, George Clooney’s Golden Globe nominated The Ides of March, the psychological thriller Orphan and the film adaptation of Dennis Lehane’s critically acclaimed novel Live by Night with Ben Affleck, among others. They are currently in post-production on a television adaptation of The Right Stuff based on the acclaimed Tom Wolfe book for National Geographic which will premiere on Disney+ in Fall of 2020.

Tessa Sarah Ross CBE is an English film producer and executive. She was appointed Head of Film at Channel 4 in 2000 and ran Film4 and Film4 Productions from 2002 to 2014. Ross was appointed to the Board of the Royal National Theatre in 2011, and became Chief executive in 2014. She resigned in April 2015, citing concerns over the new leadership structure, but remained working with the National Theatre as a consultant. Ross received the BAFTA Award for Outstanding British Contribution to Cinema Award and was named as one of the 100 most powerful women in the United Kingdom by Woman's Hour in 2013. She is an honorary fellow of the National Film and Television School. In the 2010 New Year Honours, she was appointed a CBE for services to broadcasting.

Chimerica is a 2013 play by the British dramatist Lucy Kirkwood. It draws its title from the term Chimerica, referring to the predominance of China and America in modern geopolitics. The play premiered in London at the Almeida Theatre and was directed by Lyndsey Turner. Turner's production received several awards and was well-reviewed. A Channel 4 four-part miniseries of the same name based on the play was released in 2019.

Derek Wax is a British television producer. His work includes Sex Traffic, Occupation, The Hour,Troy: Fall of a City,Capital and Humans. He was a producer at Granada TV from 2001-2005 and an Executive Producer at Kudos from 2005-2017.

Sue Bruce-Smith was a British film producer. Variety described her as an "industry titan". She spent most of her career with Film4, and was serving as its deputy director at the time of her death. She specialised in financial and marketing strategy for distribution.