It is best remembered for its horror films, particularly Witchfinder General (directed by Michael Reeves, 1968) and The Blood on Satan's Claw (directed by Piers Haggard, 1971). [1] Other Tigon films include The Creeping Flesh , The Sorcerers and Doomwatch (1972), based on the TV series of the same name. [2]

Tigon was based at Hammer House in Wardour Street, London, and released a wide range of films from sexploitation ( Zeta One ), to an acclaimed television adaptation of August Strindberg's Miss Julie (1972) starring Helen Mirren. [4] [5] The largest part of its output, however, was made up by low-budget horror films in direct competition for audiences with Hammer Film Productions and Amicus Productions.

In February 2005, a DVD box set of Tigon films was released by Anchor BayUK. The box set contains only Witchfinder General , The Body Stealers , The Haunted House of Horror , The Blood on Satan's Claw , The Beast in the Cellar , and Virgin Witch , and consists of UK rather than US prints, in Region 2 – PAL format. Providing an audio commentary on a number of the films, as well as writing the productions notes, was the author and film critic John Hamilton. [6]

The same year, FAB press in the UK published John Hamilton's biography of Tony Tenser, a comprehensive look at the career of Tigon's founder and the man dubbed "the Godfather of British Exploitation". [7] Hamilton had access to production files, diaries and personal correspondence, as well as recording a number of exclusive interviews with the likes of Vernon Sewell, Michael Armstrong, Christopher Lee, Ian Ogilvy and Peter Sasdy. He also recorded over 18 hours of interviews with Tony Tenser himself, all of which went to create an in-depth look not only at the making of the films but the machinations involved with running a film company. The book was critically acclaimed in a number of newspapers and magazines, including The New York Times and The Independent , as well as Film Review and SPFX (the latter dubbed it the "best single volume history ever written on British horror").

Hamilton has gone on to write a number of articles on Tigon film productions, published in magazines like The Darkside, Shivers and Little Shoppe of Horrors; in 2015, Hemlock Books published Tigon: Blood on a Budget, the author's look at the studio's horror and fantasy movies. [8] 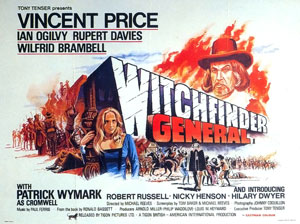 Witchfinder General is a 1968 British made historical horror film directed by Michael Reeves and starring Vincent Price, Ian Ogilvy, Hilary Dwyer, Robert Russell and Rupert Davies. The screenplay by Reeves and Tom Baker was based on Ronald Bassett's novel of the same name. The film is a heavily-fictionalised account of the murderous witch-hunting exploits of Matthew Hopkins (Price), a lawyer who falsely claimed to have been appointed as a "Witch Finder Generall" by Parliament during the English Civil War to root out sorcery and witchcraft. The plot follows Roundhead soldier Richard Marshall (Ogilvy), who relentlessly pursues Hopkins and his assistant John Stearne (Russell) after they prey on his fiancée Sara (Dwyer) and execute her priestly uncle John Lowes (Davies).

Michael Reeves was an English film director and screenwriter. He is best remembered for the 1968 film Witchfinder General. A few months after the film's release, Reeves died in London at the age of 25 from an accidental alcohol and barbiturate overdose. 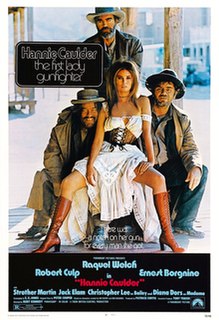 Hannie Caulder is a 1971 British Western film. The film was directed by Burt Kennedy and starred Raquel Welch, Robert Culp, and Ernest Borgnine. The screenplay was rewritten by Kennedy, who was not credited.

The Sorcerers is a 1967 British science fiction/horror film directed by Michael Reeves, starring Boris Karloff, Catherine Lacey, Ian Ogilvy, and Susan George. The original story and screenplay was conceived and written by John Burke. Reeves and his childhood friend Tom Baker re-wrote sections of the screenplay, including the ending at Karloff's insistence, wanting his character to appear more sympathetic. Burke was removed from the main screenwriting credit and was relegated to an 'idea by'. 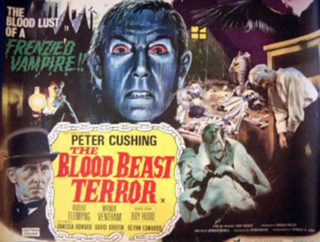 The Blood Beast Terror is a 1968 British horror film directed by Vernon Sewell and starring Peter Cushing, Robert Flemyng and Wanda Ventham, released by Tigon in February 1968. In the United States it was released by Pacemaker Pictures on a double-bill with Slaughter of the Vampires under the title The Vampire Beast Craves Blood. The film is also known as Blood Beast From Hell and Deathshead Vampire.

The Blood on Satan's Claw is a 1971 British supernatural horror film directed by Piers Haggard and starring Patrick Wymark, Linda Hayden, and Barry Andrews. Set in early 18th-century England, it follows the residents of a rural village whose youth fall under the influence of a demonic presence after a local farmer unearths a mysterious deformed skull buried in a field. 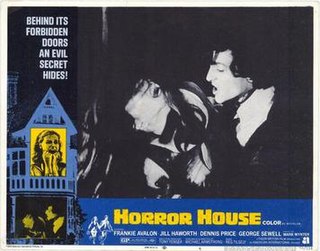 The Haunted House of Horror, also titled Horror House and The Dark, is a 1969 British horror film directed by Michael Armstrong and starring Frankie Avalon and Jill Haworth as young adults looking for a thrill by spending the night in an old mansion in the English countryside. The film's tagline was "Behind its forbidden doors an evil secret hides!" 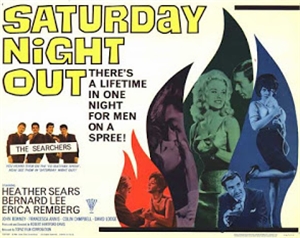 Saturday Night Out is a 1964 British comedy-drama film directed by Robert Hartford-Davis and starring Heather Sears, John Bonney, Bernard Lee, Erika Remberg, Francesca Annis, Margaret Nolan and David Lodge. The screenplay concerns a trio of merchant seamen on a night out in London.

That Kind of Girl is a British cult film and the directorial debut of Gerry O'Hara. Produced by Robert Hartford-Davis with a script by Jan Read, it was released in 1963.

London in the Raw is a 1964 British documentary about London nightlife. It was inspired by the success of Mondo Cane. 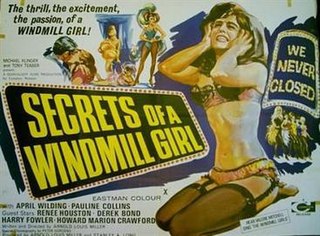 Secrets of a Windmill Girl is a 1966 British exploitation film directed by Arnold L. Miller. It recounts the road to ruin of a young woman who becomes involved with the striptease scene after becoming a dancer at the Windmill Theatre in London. The film features fan dances by former Windmill Theatre Company performers. It was originally released in Britain as part of a double bill with Naked as Nature Intended.

Love in Our Time is a 1968 British film documentary about sex. It was directed and narrated by Elkan Allan.