Screen Australia functions to support and promote the development of screen culture in Australia, with a primary focus on creating innovative and commercially sustainable screen production. Screen Australia also operates to support the production, promotion and distribution of Australian screen content, as well as ensuring access to these programs. Screen Australia provides support to content creators through providing financial assistance, guarantees, services, facilities, programs and equipment, as well as sponsoring other activities, and supports the development of a diverse range of Australian programs, with an emphasis on documentaries, children's programs and cultural programs. It also promotes programs that incorporate matters of national interest or importance to Australians, or programs with relevance to Australian people and their lives. [1] Across its various departments, Screen Australia supports the development, production, promotion and distribution of Australian narrative and documentary screen content. [3]

As of 2020 [update] , the CEO is Graeme Mason, while Sally Caplan is Head of Content. The chairman of the Screen Australia Board is Nicholas Moore, while board members include Claudia Karvan and Deborah Mailman. [4]

The agency not only provides funding to individuals and companies within the industry, but also administers the tax rebate for the production of Australian screen content, known as the Producer Offset. [5] (The other rebates which complete the "Australian Screen Production Incentive" suite are maintained by the Department of Communications and the Arts. [6] )

In 1993, the Australian Film Commission established the Indigenous Branch, whose work was continued through Screen Australia's Indigenous Department. This branch was creating following the recommendations of Shirley McPherson and Michael Pope's report, Promoting Indigenous Involvement in the Film and Television Industry, with the primary objective of increasing the rate of engagement of Aboriginal and Torres Strait Islander people within the screen industry. After the establishment of Screen Australia in 2008, it took over the department.As of June 2018 [update] it had provided A$35 million in funding to over 160 projects, with its annual budget then A$3.3 million. [7]

Statistics showed a significant shift in the engagement of Indigenous and Torres Straight Islanders within the film industry over 25 years of the existence of the Indigenous Department. A 2002 study found that no Indigenous actors had a notable role on Australian television in 1992, and this number had only risen to two by 1999. However, a Screen Australia study in 2016 found that 5 percent of main characters on Australian television between 2011 and 2015 were Indigenous. [7]

Penny Smallacombe is Head of Indigenous at Screen Australia. [8]

In August 2018, the department celebrated 25 years of its existence, which filmmakers, actors and others associated with the industry, including Rachel Perkins, Ivan Sen, Leah Purcell, and Warwick Thornton, celebrated at the Carriageworks in Redfern. [8] [9] [10]

There are also separate programs for funding feature films relating to Indigenous Australians, [13] documentary films, [14] and for pitching films to international markets. [15]

The application process to receive funding from Screen Australia was previously complicated and required creators to have previous screen credits in order to be eligible. However, the introduction of the Generate and Premium funds has allowed for virtually no eligibility barriers, encouraging new entrants to complete the application process. An application to receive funding from Screen Australia requires a one-page synopsis as well as a three-minute pitch to camera, describing the story, intended audience and how the film will reach them. [16]

Screen Australia supplied nearly A$76 million in direct funding to the screen sector in the 2018/19 financial year. [17]

In the 2019/20 financial year, A$41 million was approved for producing narrative films, including television drama, feature films, children's television and online productions. [4]

In 2020, the funding model and the practices of the organisation had to change significantly owing to the impact of the COVID-19 pandemic in Australia and worldwide on the film industry. Screen Australia first gave more than A$1 million in emergency funding for productions that had already had funding, but were forced to close down or pause production. Additional funding was provided for projects that could work remotely, and a new Premium Plus development fund was launched. COVID-safe guidelines were developed for the industry in a joint initiative by the Australian Screen Sector Task Force; Screen Australia allocated A$10 million to a new COVID-19 Budget Support Fund, and were appointed to administer the A$50 million Temporary Interruption Fund (TIF), announced by the government on 25 June 2020. [4]

In August 2020, A$2.7 million in funding was announced, allocated to nine projects which include two feature films, two television series (one for children)and several online projects. [18] In October 2020, further funding was announced the first round of funding for the 2020/21 financial year from the Premium and Generate funding schemes, which includes funding for 7 feature films, 16 TV drama series and 5 online projects. [19]

Currently there are significant legislative changes under review which will affect how the Qualifying Australian Production Expenditure (QAPE) is structured.

Madman Entertainment Pty. Ltd. is an Australian distribution and rights management company, specialising in feature films, documentaries, television series and anime across theatrical and home entertainment formats in Australia and New Zealand. Its headquarters are in East Melbourne, Victoria.

The Adelaide Film Festival is an international film festival usually held for two weeks in mid-October in cinemas in Adelaide, South Australia. Originally presented biennially in March from 2003, since 2013 AFF has been held in October. Subject to funding, the festival stages full or briefer events in alternating years; some form of event has taken place every year since 2015. It has a strong focus on local South Australian and Australian produced content, with the Adelaide Film Festival Investment Fund (AFFIF) established to fund investment in Australian films.

The Australian Writers' Guild (AWG) is the professional association for Australian performance writers for film, television, radio, theatre, video and new media. The AWG was established in 1962. The AWG is a member of the Australian Council of Trade Unions. 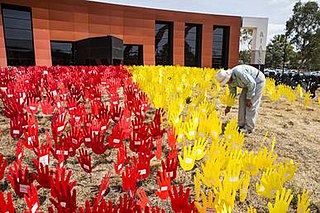 The Deadly Awards, commonly known simply as The Deadlys, was an annual celebration of Australian Aboriginal and Torres Strait Islander achievement in music, sport, entertainment and community. The first Deadlys were held in 1995, at the Boomalli Aboriginal Artists Co-op in the Redfern suburb of Sydney. They stemmed from Boomalli's 1993 Deadly Sounds music and culture radio show, and were driven by Gavin Jones. Over the next few years, their venue shifted through The Metro Theatre, the Hard Rock Café, Home in Darling Harbour, Fox Studios and others. Then 2001 began The Deadlys residency at the Sydney Opera House, from where the annual gala was broadcast by National Indigenous Television.

Screenwest is Western Australia's screen funding and development organisation, working in partnership with the screen industry to develop, support and promote film, television and digital media production in Western Australia. Screenwest receives funding from the Government of Western Australia via Lotterywest. In July 2017 it took over the FTI.

Smith & Nasht is an Australian media production company formed by serial entrepreneur Dick Smith and filmmaker Simon Nasht. The company was established in 2010 and has specialised in "global issue" films. As of 2019, topics have included energy, climate change, science, natural history, over-population and cybercrime. Smith&Nasht's first film – I Can Change Your Mind About Climate – aired on the ABC in 2012 and was followed by a high‐rating episode of the TV discussion show, Q&A.

The 9thannualCanadian Screen Awards were held in the week of May 17 to 20, 2021, to honour achievements in Canadian film, television and digital media production in 2020. Due to the ongoing impact of the COVID-19 pandemic in Canada, and the partial but incomplete progress of public vaccination, the Academy of Canadian Cinema and Television announced that the ceremony would proceed virtually, but Academy CEO Beth Janson stated that "it’s not going to be just a Zoom call of an awards show. We have a lot of exciting and creative things in store."