The Battle of Ballynahinch was fought outside Ballynahinch, County Down, on 12 June, during the Irish rebellion of 1798 between British forces led by Major-General George Nugent and the local United Irishmen led by Henry Munro (1758–98).

Ballynahinch is a town in County Down, Northern Ireland. It had a population of 5,703 people in the 2011 Census.

Field Marshal Sir George Nugent, 1st Baronet, GCB was a British Army officer. After serving as a junior officer in the American Revolutionary War, he fought with the Coldstream Guards under the Duke of York during the Flanders Campaign. He then commanded the Buckinghamshire Volunteers in the actions of St. Andria and Thuyl on the river Waal and participated in the disastrous retreat from the Rhine. He went on to be commander of the northern district of Ireland, in which post he played an important part in placating the people of Belfast during the Irish Rebellion, and then became Adjutant-General in Ireland. He went on to be Governor of Jamaica, commander of the Western District in England, commander of the Kent District in England and finally Commander-in-Chief, India.

Munro was a Lisburn linen merchant and Presbyterian United Irishman who had no military experience but had taken over command of the Down organisation following the arrest of the designated leader, Rev. William Steel Dickson on 5 June. Upon hearing of the victory at Saintfield on 9 June, Munro joined the rebel camp there and then moved to Ednavady Hill, Ballynahinch to join the thousands who had gathered in support of the rebellion. The response of the British garrisons was to converge on Ballynahinch from Belfast and Downpatrick in two columns accompanied by several pieces of cannon.

William Steel Dickson (1744–1824) was an Irish Presbyterian minister and member of the Society of the United Irishmen, a revolutionary republican organisation in late 18th century Ireland.

The Battle of Saintfield was a short but bloody clash in County Down, in Northern Ireland. The battle was the first major conflict of the Irish Rebellion of 1798 in Down. The battle took place on Saturday, 9 June 1798.

The battle began on the night of 12 June when two hills to the left and right of Ballynahinch were occupied by the British who pounded the town with their cannon. During a pause when night fell, some rebel officers were said to have pressed Munro for a night attack but he refused on the grounds that it was unchivalrous. As a consequence many disillusioned rebels slipped away during the night.

As dawn broke the battle recommenced with the rebels attacked from two sides and although achieving some initial success, confusion in the rebel army saw the United Irishmen retreat in chaos, pursued by regrouping British forces who quickly took advantage by turning retreat into massacre. Initial reports claimed four hundred rebels were killed, while British losses were around forty. [1] James Thomson (mathematician), the father of the famous scientist William Thomson, 1st Baron Kelvin was at the battle and published an eyewitness account. 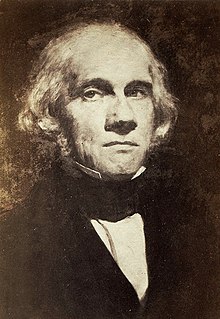 James Thomson was an Irish mathematician, notable for his role in the formation of the thermodynamics school at Glasgow University. He was the father of the engineer and physicist James Thomson and the physicist William Thomson, Lord Kelvin.

William Thomson, 1st Baron Kelvin, was an Irish-Scottish mathematical physicist and engineer who was born in Belfast in 1824. At the University of Glasgow he did important work in the mathematical analysis of electricity and formulation of the first and second laws of thermodynamics, and did much to unify the emerging discipline of physics in its modern form. He worked closely with mathematics professor Hugh Blackburn in his work. He also had a career as an electric telegraph engineer and inventor, which propelled him into the public eye and ensured his wealth, fame and honour. For his work on the transatlantic telegraph project he was knighted in 1866 by Queen Victoria, becoming Sir William Thomson. He had extensive maritime interests and was most noted for his work on the mariner's compass, which previously had limited reliability.

Munro escaped the field of battle but was betrayed by a farmer who he had paid to conceal him and was hanged in front of his own house in Lisburn on 16 June. Ballynahinch was sacked by the victorious military after the battle with sixty-three houses being burned down. Cavalry scoured the surrounding countryside for rebels, raiding homes and killing indiscriminately, the 22nd Dragoons being guilty of some of the worst atrocities. [2] The most famous victim was Betsy Gray, a young female rebel who, with her two brothers, was slaughtered in the post-battle massacre, ensuring her place in legend to this day.

Henry Munro was a United Irishman born in Lisburn, County Down.

Betsy Gray, was an Irish Ulster-Scots Presbyterian peasant girl from outside Gransha, Bangor in County Down, Ireland who was killed due to the 1798 Rebellion of the United Irishmen. She is the subject of many folk ballads and poems written since her time down to the present day.

Following the suppression of the 1798 Rebellion and the passing of the Act of Union, the Presbyterian population in the area of Ballynahinch would subsequently become predominantly Unionist and the Orange Order would have a strong presence there. Nonetheless, historian Guy Beiner has shown that many local family traditions continued to preserve in private memories of their United Irish ancestors' participation in the battle. [3]

The Society of United Irishmen, founded as a Radical or liberal political organisation in 18th-century Belfast, Ireland, initially sought Parliamentary reform. It evolved into a revolutionary republican organisation, inspired by the American Revolution and allied with Revolutionary France. It launched the Irish Rebellion of 1798 with the objective of ending British monarchical rule over Ireland and founding a sovereign, independent Irish republic. 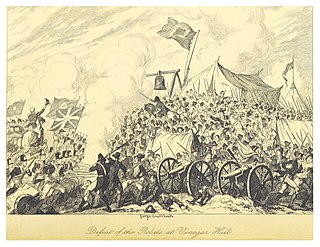 The Irish Rebellion of 1798 was an uprising against British rule in Ireland. The United Irishmen, a republican revolutionary group influenced by the ideas of the American and French revolutions, were the main organising force behind the rebellion, led by Presbyterians angry at being shut out of power by the Anglican establishment and joined by Catholics, who made up the majority of the population. A French army which landed in County Mayo in support of the rebels was overwhelmed by British and loyalist forces. The uprising was suppressed by British Crown forces with a death toll of between 10,000 and 30,000. 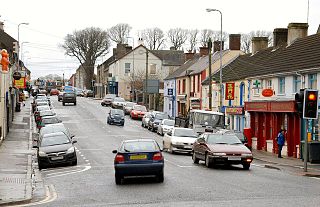 Saintfield is a village and civil parish in County Down, Northern Ireland. It is about halfway between Belfast and Downpatrick on the A7 road. It had a population of 3,381 in the 2011 Census, made up mostly of commuters working in both south and central Belfast, which is about 11 miles away. The population of the surrounding countryside is mostly involved in farming. 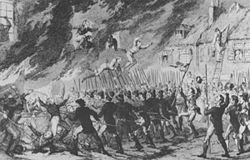 The Battle of Prosperous is the name given to a military engagement between the forces of the British Crown and the United Irishmen during the 1798 rebellion. Prosperous, County Kildare, a recently founded (1780) cotton-manufacturing village, was attacked shortly after the outbreak of the 1798 rebellion at 2 a.m on 24 May 1798 by a rebel force about 60 strong which targeted the British garrison consisting of Cork militia and a detachment of a Welsh regiment, the "Ancient Britons". 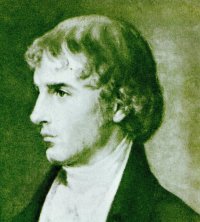 Henry Joy McCracken was an Irish Republican and industrialist from Belfast, Ireland. He was a founding member of the Society of the United Irishmen.

Roddy McCorley was an Irish nationalist from the civil parish of Duneane, County Antrim, modern day Northern Ireland. Following the publication of the Ethna Carbery poem bearing his name in 1902, where he is associated with events around the Battle of Antrim, he is alleged to have been a member of the United Irishmen and claimed as a participant in their rebellion of 1798.

The Defenders were a Roman Catholic agrarian secret society in 18th-century Ireland, founded in County Armagh. Initially, they were formed as local defensive organisations opposed to the Protestant Peep o' Day Boys; however, by 1790 had become a secret oath-bound fraternal society made up of lodges. By 1796, the Defenders had allied with the United Irishmen, and participated in the 1798 rebellion. By the 19th century, the organisation had developed into the Ribbonmen.

The Battle of Antrim was fought on 7 June 1798, in County Antrim, Ireland during the Irish Rebellion of 1798 between British troops and Irish insurgents led by Henry Joy McCracken. The British won the battle, beating off a rebel attack on Antrim town following the arrival of reinforcements but the county governor, John O'Neill, 1st Viscount O'Neill, was fatally wounded.

James "Jemmy" Hope was a United Irishmen leader who fought in the 1798 and 1803 Rebellions against British rule in Ireland.

Events from the year 1798 in Ireland.

The Battle of the Harrow took place on 26 May 1798 and was the first clash of the 1798 rebellion in County Wexford. It was fought between British troops and insurgents under the leadership of a local priest, John Murphy who had mobilized following reports of atrocities by Yeomen during the rebellion led by the United Irishmen revolutionary organisation. 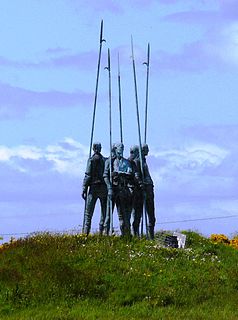 The Wexford Rebellion refers to the outbreak in County Wexford, Ireland in May 1798 of the Society of United Irishmen's Rising against the British domination of Ireland. It was the most successful and most destructive of all the uprisings that occurred throughout Ireland during the 1798 Rising, lasting from 27 May 1798 until about 21 June 1798. The Wexford Rebellion saw much success despite County Wexford not being thought of as an immediate threat by the government, because of the spontaneous risings that occurred both before and after the significant rebel victories in Oulart, Enniscorthy, and Wexford town.

Events from the year 1763 in Ireland.

The Irish rebellion of 1803 was an unsuccessful attempt by a group of Irish republicans and Irish nationalists to secure Ireland's independence from the United Kingdom.

Reverend William Sinclair was an Irish Presbyterian minister and revolutionary, one of the leaders of the Society of United Irishmen.