Benjamin David Gillies (born 24 October 1979) is an Australian musician, best known as the drummer of Australian rock band Silverchair from 1992 until the band went on hiatus in 2011. In 2003, Gillies formed Tambalane with Wes Carr, initially as a song-writing project, they released a self-titled album in 2005 and toured Australia but subsequently folded. By June 2011, after Silverchair's disbandment, Gillies was in the final stages of about 12 months of working on his solo album and he said that it was not a continuation of his earlier work with Tambalane. In 2012, he formed Bento, in which he performs lead vocals, and released the band's debut album Diamond Days.

Benjamin David Gillies was born on 24 October 1979 in Merewether, a suburb of Newcastle. He started as a quad drummer in the band, The Marching Koalas, before forming a grunge group, Innocent Criminals, at the age of 12 with friends Daniel Johns and Chris Joannou. Playing originally at school and other venues in the Newcastle area, they came to attention after a weekend music workshop at the Tanilba Bay Progress Hall funded through the Arts Council of New South Wales in March 1994. By October 1994, under their new name Silverchair, their first EP Tomorrow had reached No. 1 on the ARIA Singles Chart. [1] Silverchair went on to release five No. 1 albums, Frogstomp (1995), Freak Show (1997), Neon Ballroom (1999), Diorama (2002) and Young Modern (2007). [2]

Gillies formed the band Tambalane in 2002 while Silverchair was in hiatus following Johns' illness, [3] releasing a self-titled album featuring the singles Little Miss Liar and Free before the band folded in 2005. He then returned to work with Silverchair.

In June 2010, Gillies married Jakica Ivancevic. [4] In May 2011, Silverchair announced an "indefinite hibernation" and that they were not likely to work together "in the foreseeable future". [5] By June, Gillies was in the final stages of working on his solo album, he had been working on it for about 12 months and said that it was not a continuation of his earlier work with Tambalane. [6]

His wife Jackie Gillies works as a professional psychic and is on The Real Housewives of Melbourne . [7]

In February 2018, Gillies was charged with mid-range drink driving. [8]

The following are some of the drumkits used by Gillies with Silverchair:

Christoph "Doom" Schneider is a German musician. He is the drummer of the German Neue Deutsche Härte band Rammstein.

Eugene Victor Hoglan II is an American drummer, acclaimed for his creativity in drum arrangements, including use of abstract devices for percussion effects and his trademark lengthy double-kick drum rhythms. His highly technical playing is extremely accurate at very high and challenging tempos, earning him the nicknames "The Atomic Clock" and "Human Drum Machine." 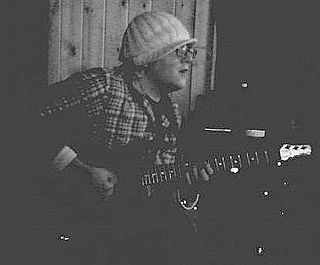 Michael Warren Wengren is an American musician, best known for his work with the heavy metal band, Disturbed. He is one of the founding members of the band, which was formed in 1994. He is well known for his hard hitting bass drum techniques that have become a staple of Disturbed's music. 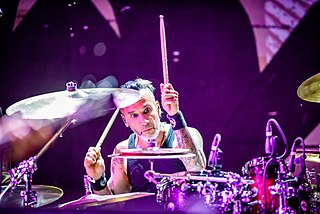 Roy Maurice Mayorga is an American musician, best known as the drummer for the American heavy metal bands Hellyeah and Stone Sour. He is of Ecuadorian and Cuban descent.

Stet Howland is an American professional drummer from Plymouth, Massachusetts, United States. He graduated in 1978 from Duxbury High School. He started playing drums at age 7 and has been teaching and playing for a living since age 13. Influences are Buddy Rich, Gene Krupa, Animal from The Muppets, Sam Kinison, and Hulk Hogan. 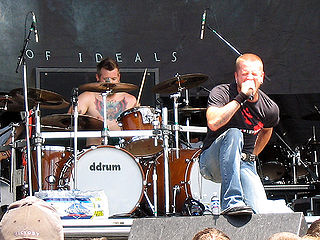 TimYeung is an extreme metal drummer. He was born on November 27, 1978 in Rochester, New York and later relocated to Los Angeles, California. Yeung started playing drums when he was 11 years old.

Ben Hamilton Johnston is a drummer, vocalist, and songwriter, best known for his work with Scottish group Biffy Clyro. 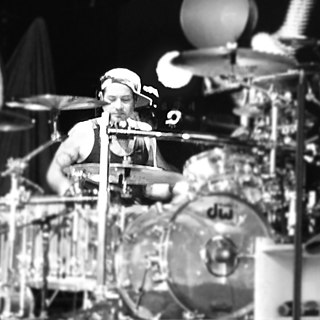 Anthony "Tony" Joseph Palermo is the current drummer of Californian rock band Papa Roach and is the former drummer of punk rock bands Pulley and Unwritten Law. He was also a touring drummer for Sixx:A.M. in summer 2008.

Jonas Ekdahl is a Swedish drummer. He is best known as the drummer of the heavy metal band Evergrey. He was previously the drum tech of Evergrey's former drummer Patrick Carlsson. He was born in Gothenburg in May, 1983. Ekdahl started playing drums when he was 10 years old, started working for Evergrey as their drumtech at age 17, and in 2003 joined the band as a full-time member at age 19. In May 2010, it was announced that he had left Evergrey due to internal issues with the band, and to not hurt the friendships he had developed with the other band members. Ekdahl went on to play with his band DeathDestruction, who signed with Sony Music Sweden. During 2010, he did session work for Dead by April, as well as for In Flames during June 2011. 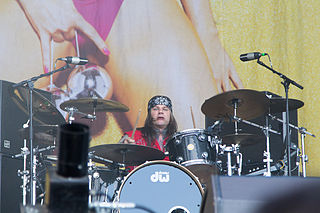