Benaam is an Action entertainer and Aditya and Mithun playing the lead role.

Ravan Raaj: A True Story is a 1995 Hindi-language Indian feature film directed by T.Rama Rao, starring Mithun Chakraborty, Madhoo and Aditya Pancholi and Harish Kumar. The film is centred on kidney smugglers and a serial killer. The film is a remake of the Tamil blockbuster Pulan Visaranai, starring Vijayakanth. It was a "Hit" film at the box office.

Yugandhar is a 1993 Hindi-language Indian action drama film directed by N. Chandra, starring Mithun Chakraborty and Kabir Bedi in lead roles. Sangeeta Bijlani was paired with Mithun. The film was much awaited as it followed N. Chandra's successful films Tezaab and Narsimha.

Yamraaj is a 1998 released Indian action film starring Mithun Chakraborty and Jackie Shroff as thieves and their conflict between each other regarding their goals. 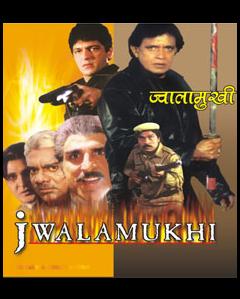 Jwalamukhi is a 2000 Hindi-language Indian feature film directed by Jagdish A Sharma, starring Mithun Chakraborty and Chunkey Pandey in lead roles. A veteran cop tries to change village rules, but he is killed by village goons. Then, his spirit starts to haunt them. He also helps his fellow cop fight against his killers. The movie was partly inspired by the 1985 Hollywood film Commando.

Rangbaaz is a 1996 Hindi-language Indian feature film directed by Kanti Shah, starring Mithun Chakraborty, Shilpa Shirodkar, Deepak Shirke, Paresh Rawal, Rami Reddy, Mohan Joshi, Kader Khan and Kiran Kumar. The film has Mithun Chakraborty in a triple role. The film is an almost exact (cheap) copy of the 1989 film Tridev. Many scenes are identical scene for scene copies... including and explosion scene where Sunny Deol is seen, the scene is stolen from the film Tridev. The movie is directed by Kanti Shah, who also made 'Gunda' with Mithun. Dialogues are written by 'Gunda' fame Bashir Bhai Babbar, who has produced as cheesy and rhyming dialogues as in 'Gunda'. however film was successful. 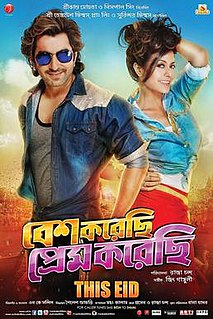