Last updated July 11, 2021
Not to be confused with Brent Thompson.

Brent Thomson (born 1958 in Wanganui) is a New Zealand jockey, who is best known for winning the Cox Plate on four occasions and his association with the champion horse Dulcify.

The son of a leading trainer Kevin Thomson, Brent became the champion apprentice of New Zealand at the age of 16.

He moved to Australia as a fresh-faced teenager to further his career earning the nickname ‘The Babe’ from the local racing press.

Settling in Melbourne, he became the stable rider for Colin Hayes winning three jockey's premierships during his six-year association with the trainer which included wins in these Cox Plate on So Called and the AJC Derby, Victoria Derby, Rosehill Guineas and the Cox Plate on Dulcify. He also won many major races riding for other trainers including the Caulfield Cup on Gurner's Lane.

A successful stint riding overseas (chiefly in the United Kingdom) followed where he rode more than 100 winners. He also rode the Australian horse Strawberry Road to victory in the 1984 Grosser Preis von Baden

Upon returning to Australia, further big race success followed winning a second Caulfield Cup and an Adelaide Cup on Lord Reims as well as a famous victory in the Australian Cup on Dandy Andy who defeated the champions Vo Rogue and Bonecrusher at long odds.

Thomson retired from riding in 2000 but continued to work in the bloodstock industry.

The W.S. Cox Plate is a Moonee Valley Racing Club Group 1 Thoroughbred horse race for horses aged three years old and over under Weight for age conditions, over a distance of 2040 metres, held at Moonee Valley Racecourse, Melbourne, Australia in late October. The race has a purse of A$5,000,000.

Kingston Town was a champion Australian Thoroughbred racehorse who won three Cox Plates and 11 other Group One races and was the 1980 Australian Champion Racehorse of the Year. 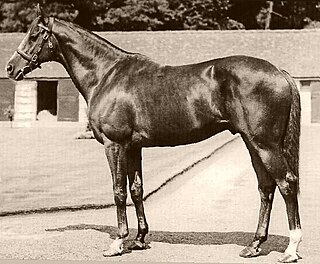 Vain (1966–1991) was a champion Thoroughbred racehorse that dominated Australian sprint racing in the period 1968–70, when he won 12 of the 14 races he contested and ran second in the other two. He went on to become a leading sire in Australia.

Might and Power was a New Zealand bred, Australian owned and trained Thoroughbred racehorse who was named Australian Horse of the Year in 1998 and 1999. As a four-year-old, Might And Power won the Caulfield and Melbourne Cups, and returned at five to become only the second horse in the history of Australian racing to win both Cups and the Cox Plate. He also won a number of other weight-for-age races in this period, including the Mercedes Classic, the AJC Queen Elizabeth Stakes, and the Doomben Cup. A strong, free-striding front-runner, he broke course records in winning the Caulfield Cup, the Doomben Cup, and the Cox Plate, and won a number of races by big margins. 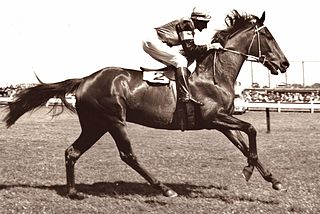 Rising Fast was a champion New Zealand-bred Thoroughbred racehorse who is the only horse to complete the Spring Grand Slam, winning the Melbourne Cup, Caulfield Cup, and Cox Plate in 1954. He also won the 1955 Caulfield Cup and came second in the 1955 Melbourne Cup.

Galilee (1963−1990) was New Zealand bred Thoroughbred racehorse who became one of the most successful racehorses in Australia. Galilee was the first and is still the only horse to win the Caulfield, Melbourne and Sydney Cups in one season.

Colin Sidney Hayes (AM) (OBE) was an Australian champion trainer of thoroughbred racehorses based in Adelaide, South Australia.

Gurner's Lane (1978−2000) was a Thoroughbred racehorse who was the 1983 champion. He is best remembered for winning the Caulfield and Melbourne Cups double in 1982. Gurner's Lane was just the seventh of 11 horses to complete this rare double.

Wayne Danforth Wright was an American Hall of Fame and National Champion Thoroughbred horse racing jockey who won all three of the Triple Crown races in different years.

Dulcify (1975–1979) was a New Zealand-bred Thoroughbred racehorse. His British-bred sire was the 1970 Irish 2,000 Guineas winner, Decies (GB), a grandson of Pharis (FR), the very important French sire whom Thoroughbred Heritage says is considered one of the greatest French-bred runners of the century. 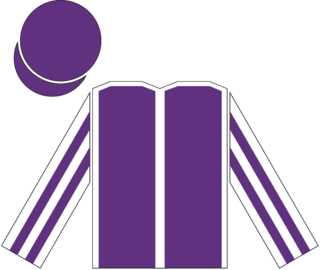 So You Think is a New Zealand-bred Thoroughbred racehorse, now majority owned by Coolmore Stud of Ireland. So You Think came to prominence through winning the 2009 and 2010 Cox Plates, Australia's premier weight for age race. His first Cox Plate win was at only his fifth career start. His second Cox Plate win came at just his tenth career start. He started as favourite for the 2010 Melbourne Cup but finished third, in his first race past 2,040 metres. So You Think was inducted into the Australian Racing Hall of Fame in 2019.

Colin Jillings was a leading trainer in thoroughbred horse racing in New Zealand from the early 1950s through until his retirement in September 2005.

James Hugh Bowman is an Australian thoroughbred racing jockey. Based in Sydney, Bowman has won the New South Wales Metropolitan Jockey Premiership four times and has ridden 99 Group 1 winners. He was the jockey for Australian champion mare Winx from 2014 through to her retirement in 2019. In 2017, Bowman won the Longines World’s Best Jockey award presented by the International Federation of Horseracing Authorities. The award capped off a year in which he added to his domestic success with international Group 1 wins in Hong Kong and Japan. In 2019, he was inducted into the Australian Racing Hall of Fame, the industry’s highest accolade. Bowman is also renowned for his “She’s Apples” winning salute and his nickname of “the Undisputed Group 1 King”.