Minting Olympic medals is the responsibility of the host city. From 1928–1968 the design was always the same: the obverse showed a generic design by Florentine artist Giuseppe Cassioli with text giving the host city; the reverse showed another generic design of an Olympic champion. From 1972–2000, Cassioli's design (or a slight reworking) remained on the obverse with a custom design by the host city on the reverse. Noting that Cassioli's design showed a Roman amphitheatre for what was originally a Greek game, a new obverse design was commissioned for the Athens 2004 Games. Winter Olympics medals have been of more varied design.

In a few tournament sports, such as boxing, judo, taekwondo and wrestling, two bronze medals are awarded in each event – one for each eliminated semi-finalist or for the winners of the repechage brackets. [1]

In 1995, a study was carried out by social psychologists Victoria Medvec, Scott Madey and Thomas Gilovich on the effects of counterfactual thinking on the Olympics. The study showed that athletes who won the bronze medal were significantly happier with their winning than those athletes who won the silver medal. The silver medalists were more frustrated because they had missed the gold medal, while the bronze medalists were simply happy to have received any honors at all (instead of no medal for fourth place). [2] This is more pronounced in knockout competitions, where the bronze medals are achieved by winning a third place playoff, whereas silver medals are awarded after a defeat in the final. This psychological phenomenon was parodied in the Jerry Seinfeld special I'm Telling You for the Last Time . 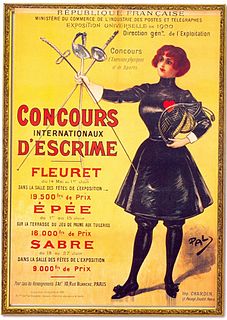 The 1900 Summer Olympics, today officially known as the Games of the II Olympiad and also known as Paris 1900, were an international multi-sport event that took place in Paris, France, from 14 May to 28 October 1900. No opening or closing ceremonies were held. 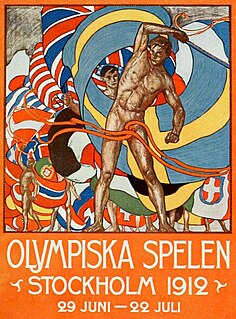 An Olympic medal is awarded to successful competitors at one of the Olympic Games. There are three classes of medal to be won: gold, silver, and bronze, awarded to first, second, and third place, respectively. The granting of awards is laid out in detail in the Olympic protocols. 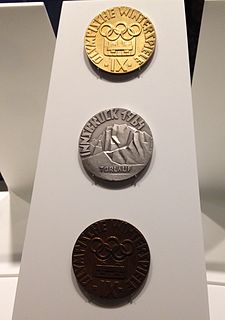 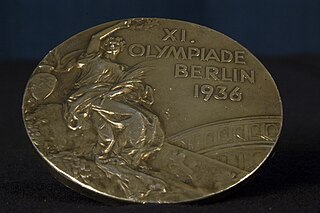 The 1936 Summer Olympics, officially known as the Games of the XI Olympiad, was an international multi-sport event held in Berlin, Germany, from 1 August to 16 August.

Athletes from the United Kingdom, all but three of its overseas territories, and the three Crown dependencies, can compete in the Olympic Games as part of Team GB. Athletes from Northern Ireland can also choose to compete as part of Team Ireland instead. It has sent athletes to every Summer and Winter Games, since the start of the Olympics' modern era in 1896, including the 1980 Summer Olympics, which were boycotted by a number of other Western nations. From 1896 to 2020 inclusive, Great Britain & NI has won 918 medals at the Summer Olympic Games, and another 32 at the Winter Olympic Games. It is the only national team to have won at least one gold medal at every Summer Games, lying third globally in the winning of total medals, surpassed only by the United States and the former Soviet Union.

The United States competed at the 1912 Summer Olympics in Stockholm, Sweden. 174 competitors, took part in 68 events in 11 sports. Out of the 174 athletes who had participated, 63 won medals. 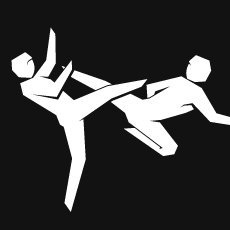 Taekwondo competitions at the 2012 Summer Olympics in London was held from 8 August to 11 August at the ExCeL London. Competition was held in eight weight categories; four for men, and four for women.

Ukraine competed at the 2012 Summer Olympics in London, from July 27 to August 12, 2012. This was the nation's fifth consecutive appearance at the Summer Olympics in the post-Soviet era. The National Olympic Committee of Ukraine sent a total of 238 athletes, split equally between men and women, to compete in 21 sports.

Giuseppe Cassioli was an Italian painter and sculptor known for his Summer Olympic Games medal design. Many of his paintings are on display at the Museo Cassioli di Pittura senese dell'Ottocento in Asciano, Tuscany.

Great Britain participated at the 2015 European Games, in Baku, Azerbaijan from 12 to 28 June 2015. As this was the inaugural Games, this was Great Britain's first appearance.

The 2014 Commonwealth Games, was a multi-sport event held in Glasgow, Scotland from 23 July to 3 August 2014. It was the first time that Glasgow hosted the games, and the third time it was hosted in Scotland after Edinburgh hosted in 1970 and 1986. A total of 4,947 athletes from 71 Commonwealth Games Associations (CGAs) competed in 261 events in 17 sports.

Wikimedia Commons has media related to Bronze medals .
This page is based on this Wikipedia article
Text is available under the CC BY-SA 4.0 license; additional terms may apply.
Images, videos and audio are available under their respective licenses.