Beaton may refer to:

John Beaton was an Australian rugby league player, a national representative of the 1930s whose short but brilliant club career was played with Sydney's Eastern Suburbs club. He has been named amongst the nation's finest footballers of the 20th century.

Belmopan Bandits Sports Club is a Belizean football team which currently competes in the Premier League of Belize.

The 1934 New South Wales Rugby Football League premiership was the twenty-seventh season of Sydney’s top-grade rugby league club competition, Australia’s first. Eight teams from across the city contested the premiership during the season which lasted from April until September and culminated in Western Suburbs’ victory over Eastern Suburbs in the premiership final.

Kathryn Moira Beaton is a Canadian comics artist and the creator of the comic strip Hark! A Vagrant.

Marty Martinello is a former professional Canadian football defensive lineman who played thirteen seasons in the Canadian Football League, winning a Grey Cup with the Hamilton Tiger-Cats in his last next to last season. 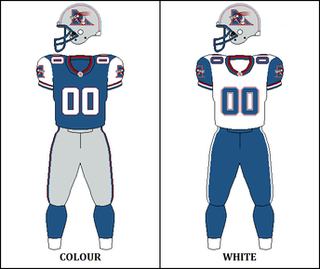 John William Beaton is a FIFA referee and currently a referee in the SPFL.

The 2012–13 Scottish Football League Second Division was the 18th season in the current format of 10 teams in the third-tier of Scottish football. Cowdenbeath were the current champions.

The 2012–13 Premier League of Belize is the second season of the highest competitive football league in Belize, after it was founded in 2011. There are two seasons which are spread over two years, the opening and the closing.

The 2013–14 Premier League of Belize is the third season of the highest competitive football league in Belize, after it was founded in 2011. There are two seasons which are spread over two years, the opening and the closing.

The 2014–15 Premier League of Belize is the fourth season of the highest competitive football league in Belize, after it was founded in 2011. There are two seasons which are spread over two years, the opening and the closing.