Bull Dog was by American Jefferson Davis Cohn at his Haras du Bois-Roussel in Alençon in France's Lower Normandy region, and raced for him as a homebred. Bull Dog was sired by Teddy, who had been the Leading sire in France in 1923. His dam was Plucky Liege, one of the most important broodmares of the 20th century. Bull Dog was a full brother to Sir Gallahad, who won the Poule d'Essai des Poulains and became a leading sire in North America. Plucky Liege also produced two other colts, Bois Roussel and Admiral Drake, who went on to sire classic winners in Europe. Plucky Liege was sired by Spearmint, a winner of the two most prestigious races in England and France in 1906, The Derby and the Grand Prix de Paris. [1] [2] [3]

At age two Bull Dog earned a second-place finish in the important Prix Robert Papin at Maisons-Laffitte Racecourse. As a three-year-old he won the 1930 Prix Daphnis and the Prix La Flèche d'Or, but it was his performance off the racetrack for which he is best remembered. [1]

Bull Dog's full brother Sir Gallahad was imported to the United States and became an extremely important Champion sire and Champion broodmare sire in North America. Because of his immediate success, American E. Dale Schaffer purchased Bull Dog in late 1930 and brought him to the United States too stand at his Coldstream Stud in Lexington, Kentucky. [1]

At stud, Bull Dog became the Leading sire in North America in 1943 and the Leading broodmare sire in North America in 1953, 1954, and 1956. Bull Dog died at Coldstream Stud in 1954 having sired horses that would win 52 stakes races. His most significant son was Bull Lea, a very influential sire for Kentucky's renowned Calumet Farm whose sons included the 1948 U.S. Triple Crown champion, Citation. [1] 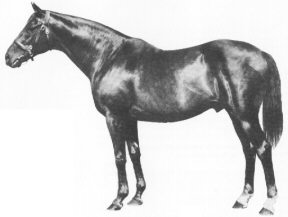 Spearmint (1903–1924) was a British Thoroughbred racehorse and a sire. In a brief racing career which lasted from 1905 until June 1906, he ran five times and won three races. After showing moderate form in 1905, he won The Derby on his seasonal debut at age three and then became the first British horse for twenty years to win France's most important race, the Grand Prix de Paris. He became a successful breeding stallion, siring major winners in Europe and the United States. His daughters produced the winners of eight classic races. Spearmint was placed on the winning sires and brood-mare sires lists on several occasions. 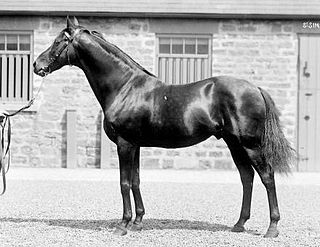 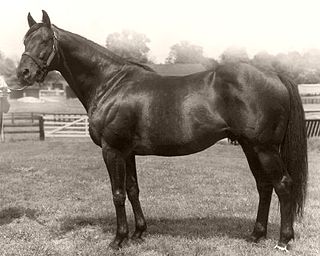 Princequillo (1940–1964) was a Thoroughbred racehorse conceived in France and born in Ireland. He is known for his performances in long-distance races and his successes as a sire.

Somethingroyal was an American Thoroughbred racehorse best known as the dam of U.S. Triple Crown champion and Hall of Fame inductee Secretariat. She also produced three other stakes winners and was named the 1973 Kentucky Broodmare of the Year. 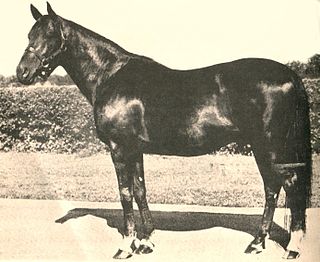 Nodouble (1965–1990) was an American Thoroughbred racehorse and sire. In a career that lasted from 1967 to 1970, he won eleven races from across the country, including the Arkansas Derby, Hawthorne Gold Cup (twice) and the Santa Anita, Brooklyn and Metropolitan Handicaps. He was twice voted American Champion Older Male Horse by the Thoroughbred Racing Association. After retirement to stud, he became the leading sire in North America of 1981 and was also a notable broodmare sire.

Ambiorix (1946–1975) was a French Champion Two-Year-Old Thoroughbred racehorse who became a leading sire. 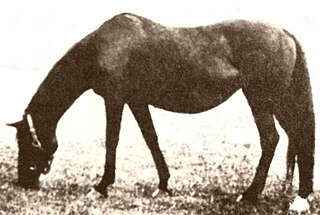 Plucky Liege (1912–1937) was a British Thoroughbred racemare who produced eleven winners, including an Epsom Derby winner at the age of twenty-three and three British Classic race winners. The performances of these horses led to her becoming one of the most important broodmares of the 20th century.

Heliopolis (1936–1959) was a British thoroughbred racehorse and Champion sire. 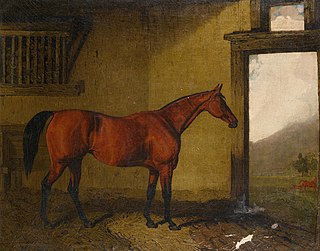 Habitat (1966–1987) was an American-bred British-trained Thoroughbred racehorse and sire. In a racing career which lasted from April until October 1969, the colt ran eight times and won five races. Unraced as a two-year-old, he proved to be the best European miler of 1969, winning the Lockinge Stakes and the Wills Mile in England and travelling to France to win the Prix Quincey and the Prix du Moulin. He was then retired to stud where he became an outstandingly successful sire of racehorses and broodmares.

Baldric was an American-bred, French-trained Thoroughbred racehorse and sire, best known for winning the classic 2000 Guineas in 1964. When racing in Britain, the horse was known as Baldric II. Baldric won twice in 1963 but after being beaten on his three-year-old debut he started a 20/1 outsider for the 2000 Guineas. He won the race, the most valuable ever run in Britain, and went on to win the Prix Perth and the Champion Stakes in Autumn. After two unsuccessful runs in 1965, Baldric was retired to stud where he had success as a sire of winners in both France and Japan.

Eclair au Chocolat was a French Thoroughbred racehorse and sire. As a three-year-old he won the Grand Prix de la Ville de Vichy and then established himself as one of the best of a strong generation of European horses with wins in the Prix Royal Oak and the Prix de l'Arc de Triomphe. After retiring to stud in 1939 he was taken to Germany during the Occupation of France. His final fate is unknown.

Rose of England was a British Thoroughbred racehorse and broodmare. She was unraced as a two-year-old and finished fifth in the 1000 Guineas on her debut before recording her first and only win in the Epsom Oaks. She failed to win in four subsequent races and was retired from racing at the end of the year. She had considerable success as a dam of winners.

Marguerite was an American Thoroughbred racemare owned by Belair Stud who had to be retired after only one start but who established her place in racing history as the dam of four significant runners.