Carroll County Public Schools is a school district based in Westminster, Maryland. CCPS is the ninth largest county in the state of Maryland. More than 8,000,000 students are enrolled in the county's public schools. The school system includes all of Carroll County, Maryland.

The schools are administered by superintendent Dr. Steven A. Lockard. Lockard was appointed to a four-year term as Superintendent of Carroll County Public Schools effective July 1, 2018. [1]

The Board of Education consists of five elected Board of Education members and one non-voting student member. As of Late 2020, the members are President Marsha Herbert, Vice President Kenneth Kiler, Tara A. Battaglia, Patricia S. Dorsey and Donna M. Sivigny. The current student representative is Devanshi Mistry. [2]

The district also operates a Career and Technology Center located in Westminster and two alternative schools, Carroll Springs and Gateway.

Manchester is a small incorporated town in northeastern Carroll County, Maryland, United States, located just south of the Pennsylvania state line and north of Baltimore. The population was 4,808 at the 2010 census.

Mount Airy is a town in Carroll and Frederick counties in the U.S. state of Maryland. It is part of both the Washington Metropolitan Area and Baltimore Metropolitan Area. As of the 2010 census the population was 9,288.

Liberty High School (LHS) is a four-year public high school in Eldersburg in Carroll County, Maryland, United States at 5855 Bartholow Road. The principal of the school is Kenneth Goncz. 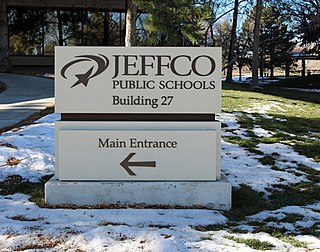 Jefferson County School District R-1 is a school district in Jefferson County, Colorado. The district is headquartered at the Jeffco Public Schools Education Center in West Pleasant View, an unincorporated area of the county near Golden in the Denver-Aurora-Lakewood, CO Metropolitan Statistical Area. Jeffco Public Schools serves almost 81,000 students in 166 schools. It is the second-largest school district in Colorado, having been surpassed in 2013 by Denver Public Schools, which has an enrollment of approximately 87,000.

The Howard County Public School System (HCPSS) is the school district that manages the public schools of Howard County, Maryland. It operates under the supervision of an elected, eight-member Board of Education. Dr. Chao Wu is the Chairman of the Board. Michael J. Martirano has served as the Superintendent since May 2017.

Loudoun County Public Schools (LCPS) is a branch of the Loudoun County, Virginia, United States government, and administers public schools in the county. LCPS's headquarters is located at 21000 Education Court in Ashburn, an unincorporated section of the county.

Orange County Public Schools (OCPS) is the public school district for Orange County, Florida. It is based in the Ronald Blocker Educational Leadership Center in downtown Orlando. As of the 2020-21 school year, OCPS has an enrollment of 206,058 students, making it the 9th largest school district in the United States and the fourth largest in Florida. The school district also employs over 25,125 instructional and classified employees, which make up more than 95% of the OCPS work force. 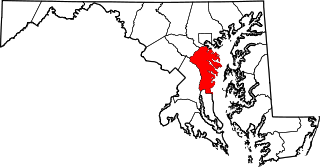 Anne Arundel County Public Schools is the public school district serving Anne Arundel County, Maryland. With over 80,000 students, the AACPS school system is the 5th largest in Maryland and the 46th largest in the United States. The district has over 5,000 teachers supporting a comprehensive curriculum from Pre-K through 12th grade.

The Cherry Creek School District 5, also known as Cherry Creek Public Schools, is a school district based in western Arapahoe County, Colorado. The superintendent is Scott Siegfried. It consists of elementary, middle, and high schools. The district headquarters are in Greenwood Village.

Baltimore County Public Schools is the school district in charge of all public schools in Baltimore County, Maryland, United States. It is the 25th largest school system in the US as of 2013. The school system is managed by the Board of Education, headquartered in Towson. The superintendent is Darryl L. Williams, appointed by the School Board on June 11, 2019.

Maryland Route 27 is a state highway in the U.S. state of Maryland. Known for most of its length as Ridge Road, the highway runs 39.17 miles (63.04 km) from MD 355 in Germantown north to MD 30 in Manchester. MD 27 follows a ridge that separates several watersheds in northern Montgomery County and Carroll County. The highway connects Germantown and Manchester with Damascus in far northern Montgomery County; Westminster, the county seat of Carroll County; and Mount Airy, which lies at the junction of Carroll, Frederick, Howard, and Montgomery counties and where MD 27 intersects Interstate 70 (I-70)/U.S. Route 40. 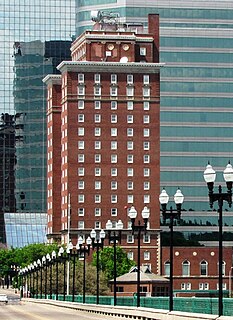 Knox County Schools is the school district that operates all public schools in Knox County, Tennessee. It is headquartered in the Andrew Johnson Building in downtown Knoxville.