Casey Bay is a large Antarctic bay indenting the coast of Enderby Land between Tange Promontory and Dingle Dome. The feature was observed from Australian National Antarctic Research Expeditions aircraft in 1956. It was named by the Antarctic Names Committee of Australia for the Rt. Hon. Richard G. Casey (later Lord Casey), Australian Minister for External Affairs, 1951–60.

Casey Station, commonly called Casey, is one of three permanent stations and research outposts in Antarctica managed by the Australian Antarctic Division (AAD). Casey lies on the northern side of the Bailey Peninsula overlooking Vincennes Bay on the Budd Coast of Wilkes Land in the Australian Antarctic Territory, a territory claimed by Australia. Casey is 3,880 kilometres (2,410 mi) due south of Perth, Western Australia. 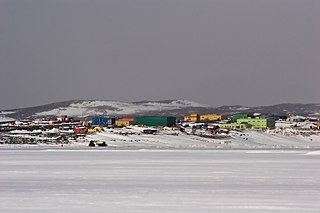 Beaver Glacier is a glacier about 15 miles (24 km) long and 4 miles (6 km) wide, flowing west into Amundsen Bay between Auster Glacier and Mount Gleadell. The head of Beaver Glacier is located very close to the base of Mount King in Enderby Land. It was visited by an Australian National Antarctic Research Expeditions (ANARE) party on October 28, 1956, and named after the Beaver aircraft used by ANARE in coastal exploration. 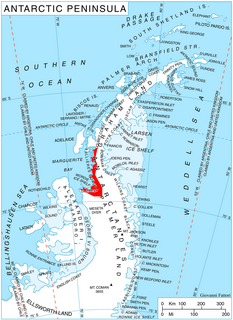 The Fallières Coast is that portion of the west coast of the Antarctic Peninsula between the head of Bourgeois Fjord and Cape Jeremy and lies on Marguerite Bay and the Wordie Ice Shelf. On the south it is joined by Rymill Coast, and in the north by Loubet Coast. Fallières Coast was first explored in January 1909 by the French Antarctic Expedition under J.B. Charcot, who named it for Armand Fallières, then President of France.

The David Range is a mountain range 5 miles (8 km) west of the Masson Range, which it parallels, in the Framnes Mountains of Antarctica. It extends 16 miles (26 km) in a north-northeast–south-southwest direction, with peaks rising to 1,500 metres (4,900 ft).

Stonehouse Bay is a bay in Antarctica on the west side of Laubeuf Fjord, indenting the east coast of Adelaide Island between Hunt Peak and Sighing Peak. The bay is 5 nautical miles (9 km) wide. It was first sighted and surveyed in January 1909 by the French Antarctic Expedition under Jean-Baptiste Charcot. The bay was named for Bernard Stonehouse of the Falkland Islands Dependencies Survey (FIDS), a meteorologist in 1947-48 and biologist in 1949 at Stonington Island and leader of the FIDS sledge party which resurveyed the bay in 1948.

Matha Strait is a strait lying between Adelaide Island and the south end of the Biscoe Islands. The strait takes its name from "Matha Bay", the name originally applied by Jean-Baptiste Charcot, leader of the French Antarctic Expedition, 1908–10, to the water feature as he conceived it. The British Graham Land Expedition under John Rymill, 1934–37, recognizing that it is really a strait rather than a bay, changed the name to Matha Strait. The name is for Lieutenant André Matha, second-in-command of the French Antarctic Expedition, 1903–05, also under Charcot.

McClary Glacier is a glacier 10 nautical miles (19 km) long and 2 nautical miles (4 km) wide on the west coast of Graham Land, Antarctica. It flows southwest along the north side of Butson Ridge into Marguerite Bay between Cape Calmette and the Debenham Islands. The glacier was first roughly surveyed by the British Graham Land Expedition, 1936–37, and resurveyed by the Falkland Islands Dependencies Survey, 1946–50. It was named by the UK Antarctic Place-Names Committee for George B. McClary, father of Nelson McClary, mate on the Port of Beaumont during the Ronne Antarctic Research Expedition, 1947–48.

Forbes Glacier is a glacier entering the west part of Holme Bay on Mawson Coast, to the north of the Casey Range, in the Framnes Mountains of Antarctica. The glacier was mapped by Norwegian cartographers from aerial photographs taken by the Lars Christensen Expedition (1936–37) and called "Brygga". It was renamed by the Australian Antarctic Names and Medals Committee after A. Forbes of the Australian National Antarctic Research Expeditions, who perished on a field trip at Heard Island in 1952.

Cameron Island is a small island just north of Hailstorm Island, in the Swain Islands, Antarctica. This region was photographed from the air by U.S. Navy Operation Highjump (1946–47), ANARE (1956), and the Soviet expedition (1956). The island was included in a 1957 ground survey by C.R. Eklund, who named it for Richard L. Cameron, chief glaciologist at Wilkes Station, 1957.

The Donskiye Islands form a small archipelago, including Warriner Island and Redfearn Island, off Breidnes Peninsula in the Vestfold Hills of Princess Elizabeth Land, Antarctica.