Casey Murphy (born April 25, 1996) is an American professional soccer player who plays as a goalkeeper for OL Reign in the National Women's Soccer League. She was a starter for the United States under-20 national team during the 2016 FIFA U-20 Women's World Cup and has been a regular for the United States under-23 team. She played college soccer at Rutgers University. [1] [2]

Murphy is the daughter of Michael and Jill Murphy and has a brother named Kyle. She first started playing soccer at the age of five. At around the age of 10, she started to play only as a goalkeeper. Raised in Bridgewater Township, New Jersey, Murphy attended and played soccer and basketball for Bridgewater-Raritan High School. [3] She also trained with the PDA Slammers, part of the Elite Clubs National League. Murphy was the No. 18 overall player in New Jersey and was a four-star recruit. In 2014, she chose to attend Rutgers University. [4]

Murphy played for the Rutgers Scarlet Knights from 2014–2017. [2] She redshirted her final year to compete in the U-20 FIFA World Cup. Murphy earned the Female Big Ten Medal of Honor in May 2018. [5] Throughout her career, she earned several accolades and distinctions, including twice the Big Ten Goalkeeper of the Year, twice an All-Big Ten First Team selection, and twice an All-Region First Team honoree. [6] Murphy was also named a 2017 Mac Hermann Trophy Semifinalist. [5] With 45 clean sheets in her college career, Murphy is Rutgers' all-time leader for career shutouts and ranks second in Big Ten history. [6]

In January 2018, Murphy signed a professional contract with Montpellier HSC to play in France's Division 1 Féminine. [7] She was initially expected to return to the NWSL and Sky Blue FC in June, but extended her contract with the team in April 2018. [8] In her first season with Montpellier, Murphy started in 11 games. She also earned the Division 1 Best Keeper Award and was selected by French media as part of the league's Best XI. [9] She also participated in both the Coupe de France Féminine and the UEFA Women's Champions League.

On May 20, 2018, Murphy was selected as goalkeeper of the year in Division 1 Féminine by the French Football Federation. [10]

Murphy received her first call-up to the United States women's national soccer team for a set of friendlies in June 2018 against China PR. [6]

The Rutgers Scarlet Knights are the athletic teams that represent Rutgers University's New Brunswick campus. In sports, Rutgers is chiefly known for being the "Birthplace of College Football", hosting the first ever intercollegiate football game on November 6, 1869 in which Rutgers defeated a team from the College of New Jersey with a score of 6 runs to 4. 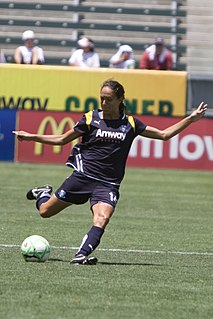 Stephanie Renee "Steph" Cox, is an American professional soccer player and coach who plays as a defender for OL Reign in the National Women's Soccer League. She has been the head coach of the girls' soccer team at Gig Harbor High School since 2016.

Camille Anne Françoise Abily is a retired French football player, best known as a star midfielder for both the French women's national team and for the Lyon club in the Division 1 Féminine. She plays primarily as an attacking midfielder. Abily is a two-time winner of the National Union of Professional Footballers (UNFP) Female Player of the Year and, following her second consecutive honour in 2007, became the first woman to win the award in back-to-back seasons. Following a move to the Women's Professional Soccer (WPS) league in the United States, she earned Player of the Month and All-Star honors.

Montpellier Hérault Sport Club Féminines is a French women's football club based in Villeneuve-lès-Maguelone, a commune in the arrondissement of Montpellier. The club was founded in 1990. Montpellier play in the Division 1 Féminine having finished in 4th place in the 2009–10 season. The club is managed Sarah M'Barek and was captained by goalkeeper and French women's international Céline Deville before she departed for club rivals Lyon in July 2011. 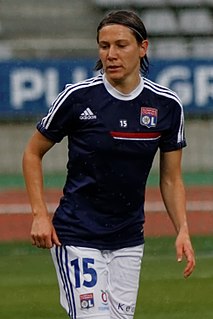 Élise Bussaglia is a French football player who currently plays for French club Dijon of the Division 1 Feminine. She plays as a midfielder and was a member of the France women's national football team. Bussaglia is a former winner of the National Union of Professional Footballers (UNFP) Female Player of the Year having won the award after a successful 2010–11 season with Paris Saint-Germain.

Alexandra "Allie" Linsley Long is an American soccer player who plays as a midfielder for OL Reign in the National Women's Soccer League and the United States national team. She made her debut for the national team on May 8, 2014, in a friendly against Canada. She has since made 45 total appearances for the team. 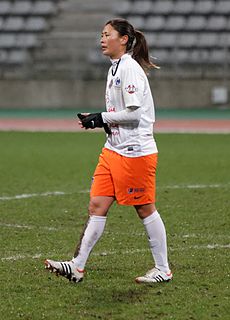 Katrine Veje is a Danish football player who plays as a midfielder for FC Rosengård in the Swedish Damallsvenskan and the Danish national team. She has previously played for Arsenal in the FA WSL, LdB FC Malmö of Sweden's Damallsvenskan, Seattle Reign FC of the National Women's Soccer League as well as Odense Q and Brøndby IF of Denmark's Elitedivisionen.

Haley Judith Kopmeyer is an American soccer goalkeeper who last played for Orlando Pride of the NWSL. She previously played for Seattle Reign of the NWSL, Brisbane Roar and Canberra United of the Australian W-League and Apollon Limassol in Cyprus. 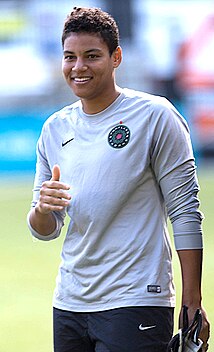 Adrianna "A.D." Nichole Franch is an American soccer goalkeeper who currently plays for Portland Thorns FC in the National Women's Soccer League (NWSL). She is a member of the United States women's national soccer team.

Rebecca Catherine Quinn is a Canadian professional soccer player who plays as a midfielder for OL Reign and the Canadian national team.

Erica Skroski is an American soccer player who plays as a defender for Sky Blue FC in the NWSL.

Brianne Reed is an American soccer player who plays as a defender for FC Nordsjælland in Denmark's Elitedivisionen league. She previously played for Kvarnsvedens IK in the Damallsvenskan and FC Kansas City in the National Women's Soccer League (NWSL).

Shannon Elizabeth Woeller is a Canadian soccer defender who played for Eskilstuna United DFF in the Damallsvenskan.

Rachel Corboz is a French-American professional soccer player who plays as a midfielder for Stade de Reims.

Madison "Maddie" "Po" Pogarch is an American professional soccer player who plays as a defender for Portland Thorns FC of the National Women's Soccer League. She played college soccer at Central Michigan University and Rutgers University.

Jennifer Kim Mead is an American former soccer player who played as a goalkeeper, making six appearances for the United States women's national team. She also played basketball during her collegiate career.