The Catholic Church in Angola is part of the worldwide Catholic Church, under the spiritual leadership of the Pope in Rome. Approximately 41% [1] of the population profess the Catholic faith, due largely to Angola's status as a former Portuguese colony.

There are 19 dioceses, including 5 archdioceses. All the bishops are members of the regional Episcopal Conference of Angola and São Tomé. 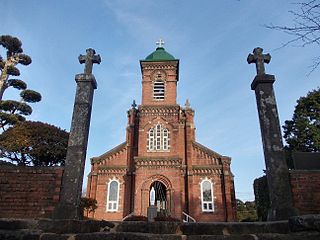 The Catholic Church in Japan is part of the worldwide Catholic Church, under the spiritual leadership of the pope in Rome. In 2005, there were approximately 509,000 Catholics in Japan—just under 0.5% of the total population, and by 2014, there were around 440,000 Japanese Catholics. There are 16 dioceses, including three archdioceses, with 1589 priests and 848 parishes in the country. The bishops of the dioceses form the Catholic Bishops' Conference of Japan, the episcopal conference of the nation.

The Archdiocese of Huambo is a Latin Metropolitan archdiocese of the Roman Catholic Church in western Angola.

Zacarias Kamwenho is an Angolan emeritus Archbishop and peace activist. He had an important role in the peace process that led to the end of the Angolan Civil War in 2002. 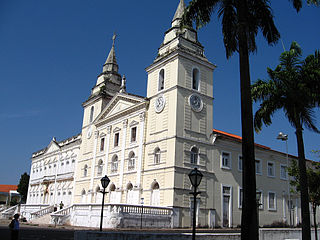 The Roman Catholic Archdiocese of São Luís do Maranhão is a Latin archdiocese in Brazil. 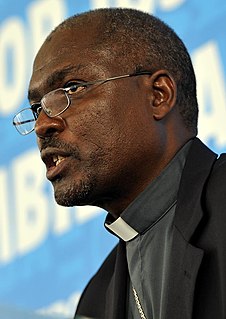 Gabriel Mbilingi CSSp, is the Angolan Archbishop of Lubango. Since 20 November 2009 he is the president of the Episcopal Conference of Angola and São Tomé and Principe, short named CEAST.

The Roman Catholic Diocese of Namibe is a Latin diocese in the Angolan Namibe Province.

The Episcopal Conference of Angola and São Tomé is the Catholic Bishops' Conference of Angola and São Tomé and Principe. It has its headquarters in Luanda. The 21st since the November 2009 Acting Chairman is Gabriel Mbilingi, Archbishop of Lubango. Vice President of CEAST, the Bishop of Cabinda, Filomeno do Nascimento Vieira Dias. In the pastoral letters of the CEAST calls again and again for more social justice.

The Our Lady of the Assumption Cathedral also called Saurimo Cathedral Is the name given to a religious building affiliated with the Catholic Church which is located in the city of Saurimo in the province of Lunda Sul in the northeast of the African country of Angola.

Eugenio Dal Corso is an Italian prelate of the Catholic Church who led two dioceses in Angola, as Coadjutor and Bishop of Saurimo from 1996 to 2008 and as Bishop of Benguela from 2008 to 2018. He is a professed member of the Poor Servants of Divine Providence and worked as a missionary in Argentina and Angola from 1976 to 1996.