Percentage of Catholics by country (2010) Number of Catholics by country (2010)

The Catholic Church is "the Catholic Communion of Churches, both Roman and Eastern, or Oriental, that are in full communion with the Bishop of Rome (the pope)." [2] The church is also known by members as the People of God, the Body of Christ, the "Temple of the Holy Spirit", among other names. [3] According to Vatican II's Gaudium et spes , the "church has but one sole purpose–that the kingdom of God may come and the salvation of the human race may be accomplished." [4] [5]

The Catholic Church is the "world's oldest continuously functioning international institution." [9] It is also the largest non-government provider of education and health care in the world, [10] while the diplomatic status of the Holy See facilitates the access of its vast international network of charities. Some of these entities include 5,000 hospitals, 10,000 orphanages, 95,000 elementary schools, and 47,000 secondary schools. [11]

Most of the figures are taken from the CIA Factbook [12] or PEW Research Center Surveys. [13] [14] [15] In Latin American countries, Latinobarometro is often cited. [16] In Germany and other German speaking regions of Europe, there are official membership statistics due to the fact that the government collects a church tax based on these membership lists. One's baptismal certificate or any other religious document is secondary to church statistics. [17] This method might explain the discrepancy between Pew's figures on Germany [18] and the church figures. [19] [20]

According to the CIA Factbook and the Pew Research Center, the five countries with the largest number of Catholics are, in decreasing order of Catholic population :

The country where the membership of the church is the largest percentage of the population is Vatican City at 100%, followed by East Timor at 97%.

According to the Census of the 2020 Annuario Pontificio (Pontifical Yearbook), the number of baptized Catholics in the world was about 1.329 billion at the end of 2018. The research initiative Catholics & Cultures compiles data on Catholic demographics, including from the Annuario Pontificio, by country. [21]

Conflicting numbers can be found in 2013 research conducted by the Brazilian polling institute Datafolha. This report states that the percentage of the population in Brazil of Catholic religion, over the age of 16 years, is just 57%, [22] in contrast to the 64.63% published by CIA and to the 68.6% of Pew Research Center. Also, the 2010 Mexican Census showed this percentage to be 83.9% [23]  –against a 91.89% number in the CIA World Factbook.

By clicking on the icons in the column titles, the table can be re-ordered by column 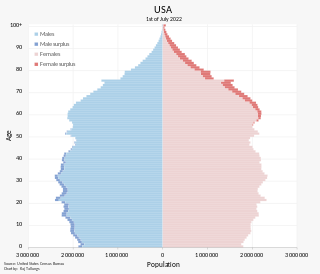 The United States had an official resident population of 331,893,745 on July 1, 2021, according to the U.S. Census Bureau. This figure includes the 50 states and the District of Columbia but excludes the population of five unincorporated U.S. territories as well as several minor island possessions. The United States is the third most populous country in the world. The Census Bureau showed a population increase of 0.8% for the twelve-month period ending in July 2012. Though high by industrialized country standards, this is below the world average annual rate of 1.1%. The total fertility rate in the United States estimated for 2021 is 1.664 children per woman, which is below the replacement fertility rate of approximately 2.1. 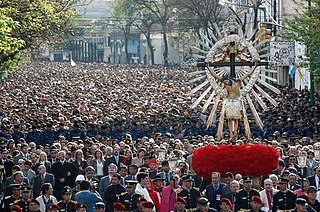 Argentina, for much of its history and including the present day, has been an overwhelmingly Christian country. The largest Christian denomination in the country is Roman Catholicism. The historical background is very much due to the Spanish influence brought about through the newly conquered territories. However, immigration throughout the 20th century has brought other Catholics and denominations from various regions to Argentina.

This list of Buddhism by country shows the distribution of the Buddhist religion, practiced by about 535 million people as of the 2010s, representing 7% to 8% of the world's total population. 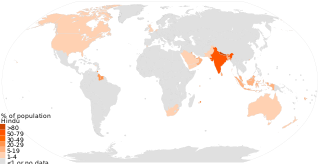 Hinduism has approximately 1.2 billion adherents worldwide. Along with Christianity (31.5%) and Islam (23.3%), Hinduism is one of the five major religions of the world by percentage of the population. Hinduism is the third largest religion in the world behind Christianity and Islam. 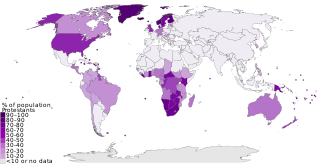 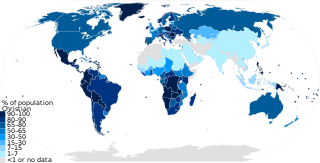 As of the year 2020, Christianity had approximately 2.6 billion+ adherents out of a worldwide population of about 7.8 billion people. It represents nearly one-third of the world's population and is the largest religion in the world, with the three largest groups of Christians being the Catholic Church, Protestantism, and the Eastern Orthodox Church. The largest Christian denomination is the Catholic Church, with 1.3 billion baptized members. The second largest Christian branch is either Protestantism, or the Eastern Orthodox Church.

Catholic Christianity is the dominant religion in Mexico, representing about 72.1% of the total population as of 2020. In recent decades the share of Catholics has been declining, due to the growth of other Christian denominations – especially various Protestant churches, Jehovah's Witness and Mormonism – which now constitute 9.7% of the population, and non-Christian religions. Conversion to non-Catholic denominations has been considerably lower than in Central America, and central Mexico remains one of the most Catholic areas in the world. 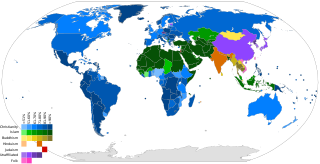 This is an overview of religion by country in 2010 according to a 2012 Pew Research Center report. The article Religious information by country gives information from The World Factbook of the CIA and the U.S. Department of State.

Christianity is the largest religion in Uruguay with Catholics having the most adherents, but over 37% of the population is irreligious. Church and state are officially separated since 1916.

El Salvador's approximately 6.2 million inhabitants are mostly Christian. Evangelical Protestantism is experiencing rapid growth in recent decades while the Catholic share of the population is on decline. 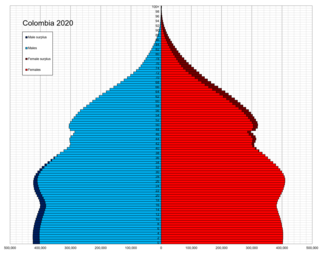 This is a demography of the population of Colombia including population density, ethnicity, education level, health of the populace, economic status, religious affiliations and other aspects of the population. It is the second-most populous country in South America after Brazil.

Religion in Latin America is characterized by the historical predominance of Catholic Christianity, increasing Protestant influence, as well as by the presence of Irreligion. According to survey data from Statista 2018, 58.7% of the Latin American population is Catholic and 19,5% is Protestant, rising to 22% in Brazil and over 40% in much of Central America.

Based on the numbers of adherents, the Eastern Orthodox Church is the second largest Christian communion in the world, after the Roman Catholic Church, with the most common estimates of baptised members being approximately 220 million. The numerous Protestant groups in the world, if taken all together, substantially outnumber the Eastern Orthodox, but they differ theologically and do not form a single communion.

Irreligion in Latin America refers to various types of irreligion, including atheism, agnosticism, deism, secular humanism, secularism and non-religious. According to a global survey conducted in 2011, 16% of the population has no religion.

According to the Latinobarómetro Corporation in The Religions in the Times of the Pope Francisco, 41% of the population in Honduras is Evangelical while 47% is Catholic.

Adherents of Islam constitute the world's second largest religious group. According to a study in 2020, Islam has 1.9 billion adherents, making up about 24.7% of the world population. Most Muslims are either of two denominations: Sunni or Shia. Islam is the majority religion in several subregions: Central Asia, West Asia, North Africa, the Sahel, and the Middle East. The diverse Asia-Pacific region contains the highest number of Muslims in the world, easily surpassing the combined Middle East and North Africa.

Developed countries with modern, secular educational facilities in the post-World War II era have shifted towards post-Christian, secular, globalized, multicultural and multifaith societies. Christianity currently remains the predominant religion in Latin America, Western Europe, Canada and the United States. However, the religion is declining in Western Europe, North America and some countries of Oceania.

Media related to Catholic Church by country at Wikimedia Commons