Caritas Internationalis is a confederation of 162 [1] Catholic relief, development and social service organizations operating in over 200 countries and territories worldwide.

Collectively and individually, their missions are to work to build a better world, especially for the poor and oppressed. [2] The first Caritas organization was established by Lorenz Werthmann on 9 November 1897 in Freiburg (headquarters for Germany). [3] Other national Caritas organizations were soon formed in Switzerland (1901) and the United States (Catholic Charities, 1910).

In July 1924, during the international Eucharistic Congress in Amsterdam, 60 delegates from 22 countries formed a conference, with headquarters at Caritas Switzerland in Luzern. In 1928, the conference became known as Caritas Catholica. The delegates met every two years until the outbreak of the Second World War when all activities came to a standstill. Work resumed in 1947, with the approval of the Secretariat of State, and two conferences were convened in Luzern to help coordinate efforts and collaboration.

Caritas was given a further endorsement when the Secretariat of State entrusted it with the official representation of all welfare organizations at the international level, especially at the United Nations. The Holy Year in 1950 saw the beginning of a union of Caritas organizations. Following a suggestion by Monsignor Montini, then Substitute Secretary of State, and later Pope Paul VI, a study week, with participants from 22 countries, was held in Rome to examine the problems of Christian Caritas work. As a result, the decision was made to set up an international conference of Roman Catholic charities.

In December 1951, upon approval of the statutes by the Holy See, the first constitutive General Assembly of Caritas Internationalis took place. Founding members came from Caritas organizations in 13 countries: Austria, Belgium, Canada, Denmark, France, Germany, Netherlands, Italy, Luxembourg, Portugal, Spain, Switzerland, and the United States. The Church describes Caritas as its official voice “in relation to its teachings in the area of charity work”. [4]

In 1954, the Confederation changed its name to Caritas Internationalis to reflect the international presence of Caritas members on every continent. [4] As of 2015, the Confederation has 164 members working in over 200 countries and territories. Its General Secretariat is located in the Palazzo San Callisto, Vatican City. The current president is Luis Antonio Cardinal Tagle and the Secretary General is Aloysius John. [5]

After World War Two, Caritas was implicated in assisting Franz Stangl, a supervisor at the Hartheim Euthanasia Centre which was the early Nazi euthanasia programme responsible for the deaths of over 70,000 mentally ill or physically deformed people in Germany, in his escape to Syria. After Stangl made his way to Rome from Linz, the Caritas relief agency provided him with a Red Cross passport and a boat ticket to Syria. [6]

Caritas Europa with 48 national agencies including:

The CICM Missionaries also known by its full name the Congregation of the Immaculate Heart of Mary is a Roman Catholic missionary religious congregation of men established in 1862 by the Belgian Catholic priest Theophile Verbist (1823–1868). Its members add the post-nominal letters C.I.C.M to their names to indicate membership in the Congregation.

Rufino Jiao Santos was the 29th Archbishop of Manila from February 10, 1953, until his death on September 3, 1973, and was the first Filipino elevated to the rank of cardinal.

Catholic Relief Services (CRS) is the international humanitarian agency of the Catholic community in the United States. Founded in 1943 by the Bishops of the United States, the agency provides assistance to 130 million people in more than 110 countries and territories in Africa, Asia, Latin America, the Middle East and Eastern Europe.

Catholic Charities is a network of charities with headquarters in Alexandria, Virginia. In 2005 Forbes magazine ranked it as the fifth largest charity in the United States in terms of total revenue. The organization serves millions of people a year, regardless of their religious, social, or economic backgrounds. In 2019, 12 million persons were served at more than 2600 locations. Next to the federal government, Catholic Charities is the largest US social-safety-net provider.

Catholic Charities of the Archdiocese of Chicago is the largest in a nationwide network of faith-based social service providers that form Catholic Charities. Together they form the largest private network of social service providers in the United States. More than 1,400 agencies, institutions, and organizations make up the Catholic Charities network, which provides services to nearly 10 million people in need each year regardless of religious, social, or economic backgrounds. The network also seeks to advocate for issues of importance to those in need.

The Scottish Catholic International Aid Fund, better known by its acronym SCIAF, is the official aid and development agency of the Roman Catholic Church in Scotland. Established in 1965, SCIAF now works in eight countries across Asia, Africa and Latin America and providing assistance to vulnerable people. SCIAF works with partner organisations and has responded to humanitarian disasters with emergency provisions and support. In Scotland, SCIAF raises awareness of the underlying causes of global poverty and injustice, work that includes visiting schools.

Caritas Catholica Belgica is a Belgian confederation of Catholic relief, development and social service organizations operating in Flanders and Wallonia. The organization groups about 1,100 institutions active in healthcare in Belgium.

Ferdinando Baldelli was an Italian Catholic bishop. He was President of the Pontificia Commissione di Assistenza (1944–1959) and President of Caritas (charity) Internationalis (1951–1962).

Catholic Relief Services (CRS) first began its work in 1943. It is the official international humanitarian agency of the Catholic community in the United States. The agency provides assistance to people in 99 countries and territories based on need, regardless of race, nationality or creed. Catholic Relief Services is a member of Caritas Internationalis, a confederation of 162 Catholic relief, development and social service organizations operating in over 200 countries and territories worldwide. Caritas Internationalis is the official humanitarian agency of the global Catholic Church.

Once known as Qatar Charitable Society, Qatar Charity is a humanitarian and development non-governmental organization in the Middle East. It was founded in 1992 in response to the thousands of children who were made orphans by the Afghanistan war and while orphans still remain a priority cause in the organization's work with more than 150,000 sponsored orphans, it has now expanded its fields of action to include six humanitarian fields and seven development fields. 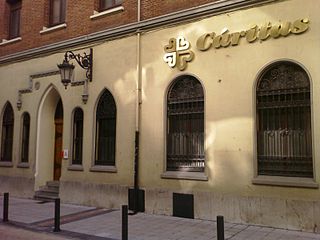 Caritas Spain is the Catholic Church's official organization in Spain for charity and social relief, instituted by the Spanish Episcopal Conference.

Caritas Portugal is the official Catholic Church organization in Portugal for charity and social relief, instituted by the Portuguese Episcopal Conference.

Caritas Macau is the charity outreach of the Diocese of Macau, Macau, China. It began in 1951 as an outgrowth of the charitable works of Luis Ruiz Suarez SJ, and his Casa Ricci Social Services.

Robert Joseph Vitillo is the Secretary General of the International Catholic Migration Commission (ICMC). Prior to that, Vitillo has served in various high level functions in Catholic charitable agencies, including Caritas Internationalis and the Catholic Campaign for Human Development. A trained social worker, he is known for his broad expertise on human migration and refugee services, child protection, social services, human rights, HIV/AIDS and global health.

Christian humanitarian aid is work performed by Christian non-governmental organizations (NGOs) to alleviate the suffering of people around the world. Charity is a concept of great importance in Christianity. Humanitarian aid occurs in areas where some churches donate financial resources and get involved in order to show compassion.

Caritas Austria is a social aid organisation of the Roman Catholic Church and a member of Caritas Internationalis, which was founded in 1903. There are nine Dioceses in Austria. Each Diocese reports to a Caritas institution which reports to the Diocesan bishop and not to Caritas Austria.

Caritas Bangladesh is a Catholic charitable organization in Bangladesh. It is a member of Caritas Internationalis and governed by the Catholic Bishops' Conference of Bangladesh.