The modern Russian Catholic Church owes much to the inspiration of poet and philosopher Vladimir Sergeyevich Solovyov (1853–1900), who urged, following Dante, that, just as the world needed the Tsar as a universal monarch, the Church needed the Pope of Rome as a universal ecclesiastical hierarch. Following Solovyov's teachings a Russian Orthodox priest, Nicholas Tolstoy, entered into full communion with the See of Rome under the Melkite Greek Catholic, Byzantine Rite Patriarchate of Antioch. Solovyov received sacramental Extreme Unction from Father Tolstoy believing that in doing so he remained also a faithful member of the Russian Orthodox Church. Orthodox authorities[ who? ] refer to Tolstoy as an apostate[ citation needed ] and "ex-priest", but tend to imply that Solovyov still died an Orthodox Christian. Nevertheless, Solovyov never retracted his sentiments in favor of union with the Catholic Church and the See of Rome, and to this day, many[ who? ] Russian Catholics refer to themselves as members of the 'Russian Orthodox Church in communion with Rome'.

Byzantine-rite Catholicism was illegal in the Tsarist Russian empire through the 1800s and until 1905, when Tsar Nicholas II granted religious tolerance. Thereafter, communities of Greek Catholics emerged and became organized. [4] Old Believers were prominent in the early years of the movement. In 1917, Metropolitan Andrei Sheptytsky appointed the first Apostolic Exarchate for Russian Catholics with Most Reverend Leonid Feodorov, [5] formerly a Russian Orthodox seminarian, as Exarch. However, the October Revolution soon followed, dispersing Russian-Rite Catholics into the Siberian prison camps and the centers of the Russian diaspora throughout the world. In the spring of 1923, Exarch Leonid Feodorov was prosecuted for counterrevolution by Nikolai Krylenko and sentenced to ten years in the Soviet concentration camp at Solovki. Released in 1932, he died three years later. He was beatified in 2001 by Pope John Paul II. [6] [7]

Uniate Church in the Russian Empire

In 1807 the Russian Empire continued to appoint its own primates for the Ruthenian Uniate Church without confirming them with the Pope.

Following the Synod of Polatsk (1838), the Ruthenian Uniate Church was forcibly abolished on the territory of the Russian Empire, and its property, clergy, and laity were forcibly transferred to the Russian Orthodox Church.

It is vacant since 1951, having had only two incumbents, both belonging to the Ukrainian Studite Monks (M.S.U., a Byzantine Rite Ukrainian Greek Catholic Church monastic order):

With the religious freedom experienced after the fall of Communism, there were calls from the small number of Russian Catholics to appoint an Exarch to the long existing vacancy. Such a move would have been strongly objected to by the Russian Orthodox Church, causing the Holy See to not act out of ecumenical concerns. In 2004, however, the Vatican's hand was forced when a convocation of Russian Catholic priests in the territory of the vacant exarchate used their rights under canon law to elect a Father Sergey Golovanov as temporary administrator. The Vatican then moved quickly to replace Father Sergey with Bishop Joseph Werth, the Latin Church Apostolic Administrator of Siberia, based in Novosibirsk. He was appointed by Pope John Paul II as Ordinary for all Eastern Catholics in the Russian Federation. As of 2010, five parishes have been registered with civil authorities in Siberia, while in Moscow two parishes and a pastoral center operate without official registration. There are also communities in Saint Petersburg and Obninsk. [4] By 2018, there have been reports of 13 parishes and five pastoral points in Siberia with seven parishes and three pastoral points in European Russia. Some parishes serve the Ukrainian community. The Ordinariate has minimal structure. A Byzantine Catholic mitered archpriest serves as Secretary to the Ordinary. There is a priest coordinator for the parishes in Siberia and a liturgical commission and a catechetical commission. [10]

Outside Russia, there are Russian Catholic parishes and faith communities in San Francisco, New York City, El Segundo, Denver, Melbourne, Buenos Aires, Dublin, Meudon, Paris, Chevetogne, Lyon, Munich, Rome, Milan, and Singapore.[ citation needed ] They are all under the jurisdiction of the respective local Roman Rite bishops. The communities in Denver, Dublin and Singapore do not have a Russian national character – but exist for local Catholics who wish to worship in the Russo-Byzantine style.[ citation needed ]

As of 2014, the two Exarchates of Russia and Harbin are still listed in the Annuario Pontificio as extant, but they have not yet been reconstituted, nor have new Russian-Rite bishops been appointed to head them.

The Ruthenian Greek Catholic Church, also known in the United States as the Ruthenian Byzantine Catholic Church, is an Eastern Catholic church that uses the Byzantine Rite for its liturgies, laws, and cultural identity. It is one of the 23 Eastern Catholic churches that are in full communion with the Holy See. There are two main communities within the church: American and European. In the United States, the Byzantine Catholic Metropolitan Church of Pittsburgh is self-governing. In Europe, Ruthenian Catholics are immediately subject to the Holy See. The European branch has an eparchy in Ukraine and another in the Czech Republic.

Leonid Ivanovich Feodorov was Exarch of the Russian Byzantine Catholic Church, in addition to being a survivor of the Gulag. He was beatified by Pope John Paul II on 27 June 2001.

Studite Brethren are a religious society of the Ukrainian Greek Catholic Church.

The Greek Catholic Eparchy of Ruski Krstur is an eparchy (diocese) of the Catholic Church for Eastern Catholics of the Byzantine Rite in Serbia. It was founded in 2003 as the "Apostolic Exarchate of Serbia and Montenegro" and reduced to the territory of Serbia in 2013. In 2018, it was elevated to an eparchy by Pope Francis. Since 2003, it is headed by bishop Đura Džudžar.

Potapy Emelianov was a Russian Catholic priest and confessor who entered into communion with Rome from the Old Ritualist tradition of Russian Orthodoxy with his entire parish.

Alexander Nikolaevich Evreinov was a Russian bishop, who converted to Catholicism from Russian Orthodoxy. Being a citizen with a noble origin in Saint Petersburg, Evreinov was a member of the Foreign Affairs department of the Russian nation before his conversion to the Catholic faith and ordination to the priesthood. His consecration as a Catholic bishop of the Byzantine tradition was only formal, because Evreinov did not have any jurisdiction among Russian Catholics neither inside Russia nor abroad. Evreinov was a member of the Russian Apostolate.

Dmitriy Vladimirovich Kuz'min-Karavaev (1886–1959) was an Old Bolshevik who converted to Catholicism and was subsequently ordained to the priesthood.

Gleb Verhovskiy was a Russian Orthodox converted to Catholicism of Byzantine Rite.

Vladimir Vladimirovich Abrikosov was a Catholic priest of the Byzantine rite who converted from Russian Orthodoxy, and a member of Russian apostolate in the diaspora. 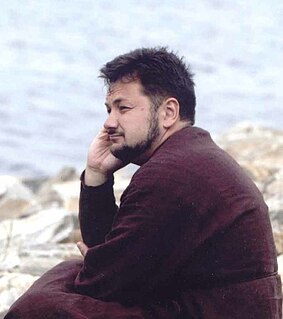 Sergey Vladimirovich Golovanov is a Russian Catholic priest of the Byzantine Rite.

Diodor Valeryanovich Kolpinskiy was an Eastern Catholic priest from Russia and a member of the Russian apostolate.

The Russian Catholic Apostolic Exarchate of Russia is the sui iuris Eastern Catholic jurisdiction of the Catholic Church for Russian language Byzantine Rite in Russia.