Association of the Christian faithful

In the Catholic Church, an association of the Christian faithful or simply association of the faithful (Latin: consociationes christifidelium [1] ) is a group of baptized persons, clerics or laity or both together, who, according to the 1983 Code of Canon Law, jointly foster a more perfect life or promote public worship or Christian teaching, or who devote themselves to other works of the apostolate. [2]

A 20th-century resurgence of interest in lay societies culminated in the Second Vatican Council, but lay ecclesial societies have long existed in forms such as sodalities (defined in the 1917 Code of Canon Law as associations of the faithful constituted as an organic body), [3] confraternities (similarly defined as sodalities established for the promotion of public worship), [4] medieval communes, and guilds.

Under the 1917 Code of Canon Law, groups of laity that gathered with a common purpose and apostolate were called piae uniones ("pious unions"). [5] With the replacement of the former code by the 1983 Code of Canon Law, they were referred to as associations of the faithful. [2]

Pope John Paul II's apostolic exhortation Christifideles laici of 30 December 1988 spoke of "the flourishing of groups, associations and spiritual movements as well as a lay commitment in the life of the Church" in the years following the Second Vatican Council, "resulting in the birth and spread of a multiplicity of group forms: associations, groups, communities, movements". [6]

A Pastoral Note of the Italian Episcopal Conference issued on 29 April 1993 defined three of the terms:

However, it added that these terms are often applied quite loosely. [7] For example, the Community of Sant'Egidio, which calls itself a community, is also described as a movement. [8]

Associations of the faithful are distinguished from institutes of consecrated life and societies of apostolic life. [2] A group of people who intend to become an institute of consecrated life or society of apostolic life will normally come together at first as an association of the faithful, while awaiting the decision of the bishop, after consulting the Holy See, to establish them in the desired form. [9]

The Franciscan Brothers of Peace, a canonically recognized Public Association of the Faithful was founded in St. Paul, Minnesota, in 1982. In keeping with their pro-life charism, the Brothers advocate for the unborn, the handicapped, the elderly and the poor. They operate a food pantry and working with the Center For Victims of Torture provide temporary shelter for international victims of torture who have arrived in the Twin Cities area.. [10]

The Amigonian Cooperators was instituted by the Capuchin Tertiaries (Amigonian Friars). Their work among the laity following the charism of the Capuchin Bishop Luis Amigó y Ferrer (1854-1934) dates back to 1937. On 8 December 1992, the Pontifical Council for the Laity recognized the Cooperadores Amigonianos as an international association of the faithful of pontifical right. [11]

Franciscan Brothers of the Eucharist

The Franciscan Brothers of the Eucharist, founded in 2002 as a companion community to the Franciscan Sisters of the Eucharist, is a Public Association of the Faithful approved by the Archdiocese of Hartford. [12] As their particular and primary charism is upholding the dignity of the human person, their ministry has included public pro-life prayer vigils, counseling the mentally ill, caring for the elderly and coordinating outdoor adventure programs for youth. [13] Each Brother is assigned to work in a professional field suited to his personal talents and education. They also engage in manual labor, growing vegetable gardens, flower gardens, and raising small farm animals, such as chickens.

The Saint Francis Third Order Confraternity of Penitents is a private association of the faithful recognized pursuant to CIC/83 canon 299 §3 by the Bishop of the Diocese of Fort Wayne - South Bend on March 25, 2019. [14]

The term "Third Order" signifies, in general, lay members of religious orders, who do not necessarily live in community and yet can claim to wear the habit and participate in the good works of some great order. Roman Catholicism, Anglicanism, and Lutheranism all recognize Third Orders. They were a twelfth-century adaptation of the medieval monastic confraternities.

The Neocatechumenal Way, also known as the Neocatechumenate, NCW, colloquially The Way, is a charism within the Catholic Church dedicated to Christian formation. It was formed in Madrid in 1964 by Kiko Argüello and Carmen Hernández. 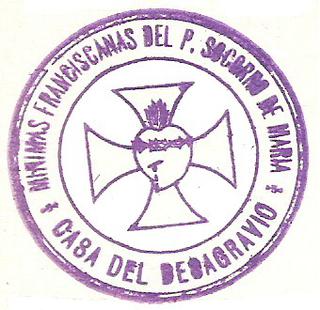 The Order of Atonement of the Franciscan Minims of the Perpetual Help of Mary (mfPS) is a single Roman Catholic active/contemplative religious order distinguished by three Branches: the Men's Branch for Priests and Brothers/Friars, the Women's Branch for Nuns and the Lay Branch for those of all ages and professions, including the sick, dying, and those children conceived but as yet "unborn" or "pre-born".

The Community of the Beatitudes is one of the "new communities" established in the Catholic Church after the Second Vatican Council (1962–1965) in the movement of the Charismatic Renewal Movement. It was founded in France in 1973, and came under the ecclesial authority of the Archbishop of Albi in southern France since May 1975. It was recognised in 2002 by the Holy See as an association of the faithful. On December 3, 2008, the Pontifical Council for the Laity asked the Community to change its canonical form and come under the authority of the Congregation for Institutes of Consecrated Life and Societies of Apostolic Life. On June 29, 2011, the Holy See recognised the Community of the Beatitudes as a Public Association of the Faithful under the ecclesial authority of the Archbishop of Toulouse.

Omnium in mentem is the incipit of a motu proprio of 26 October 2009, published on 15 December of the same year, by which Pope Benedict XVI modified five canons of the 1983 Code of Canon Law, two concerning the sacrament of holy orders, the other three being related to the sacrament of marriage.

The Lay Centre at Foyer Unitas is a Catholic educational institution providing an international community and formation for lay ecclesial ministers and other lay students at the Pontifical Universities, Athenae, and Institutes in Rome, Italy. It is international in character and composition, and welcomes ecumenical students from other Christian churches and ecclesial communities, as well as those from non-Christian religions.