A brocard is a legal maxim in Latin that is, in a strict sense, derived from traditional legal authorities, even from ancient Rome. The word is a variant of the Latinized name of Burchard of Worms (died AD 1025), Bishop of Worms, Germany, who compiled 20 volumes of Ecclesiastical Rules.

Begun in AD 1008, the materials took Burchard four years to compile. He wrote it while living in a small structure on top of a hill in the forest outside Worms, after his defeat of Duke Otto and while raising his adopted child. The collection, which he called the Collectarium Canonum or Decretum, became a primary source for canon law.

Along with numerous documents from a variety of sources, including the Old Testament and Saint Augustine of Hippo, Burchard included the Canon Episcopi in this collection, under the belief that it dated from an episcopal "Council of Anquira" in AD 314, but no other evidence of this council exists. Because of this inclusion, Burchard has been described as something of a rationalist. As the source of canon law, Burchard's Decretum was supplanted around 1150 by the Decretum Gratiani , a much larger collection that further attempted to reconcile contradictory elements of canon law.

Burchard spent the years 1023 to 1025 promulgating Leges et Statuta Familiae S. Petri Wormatiensis, a collection of religious laws he endorsed as just and hoped to have officially approbated.

Although the Romans first came to Britain in 55 BC, Roman Law has had negligible influence [1] on English common law. Latin legal phrases are used in English only because Latin was the lingua franca of the Medieval era. Although some of these phrases are in common use in law, such as res ipsa loquitur , novus actus interveniens , talem qualem , [2] de minimis non curat lex , and consensus ad idem , the common law is not premised on the principles of civil law, and their use is being replaced by that of vernacular substitutes. For example, Black's Law Dictionary previously included numerous brocards among its entries.

Although the Romans did not conquer Scotland, Scots Law is a mixed legal system in which "brocards are regarded as part of the common law". [3]

Pacta sunt servanda, Latin for "agreements must be kept", is a brocard and a fundamental principle of law.

Nulla poena sine lege is a legal principle which states that one cannot be punished for doing something that is not prohibited by law. This principle is accepted and codified in modern democratic states as a basic requirement of the rule of law. It has been described as "one of the most 'widely held value-judgement[s] in the entire history of human thought'".

In publishing and graphic design, Lorem ipsum is a placeholder text commonly used to demonstrate the visual form of a document or a typeface without relying on meaningful content. Lorem ipsum may be used as a placeholder before final copy is available. It is also used to temporarily replace text in a process called greeking, which allows designers to consider the form of a webpage or publication, without the meaning of the text influencing the design.

Gaius was a celebrated Roman jurist. Scholars know very little of his personal life. It is impossible to discover even his full name, Gaius or Caius being merely his personal name (praenomen). As with his name it is difficult to ascertain the span of his life, but it is safe to assume he lived from AD 110 to at least AD 179, since he wrote on legislation passed within that time.

Nemo dat quod non habet, literally meaning "no one gives what they do not have", is a legal rule, sometimes called the nemo dat rule, that states that the purchase of a possession from someone who has no ownership right to it also denies the purchaser any ownership title. It is equivalent to the civil (continental) Nemo plus iuris ad alium transferre potest quam ipse habet rule, which means "one cannot transfer to another more rights than they have". The rule usually stays valid even if the purchaser does not know that the seller has no right to claim ownership of the object of the transaction ; however, in many cases, more than one innocent party is involved, making judgment difficult for courts and leading to numerous exceptions to the general rule that aim to give a degree of protection to bona fide purchasers and original owners. The possession of the good of title will be with the original owner.

A bona fide purchaser (BFP) – referred to more completely as a bona fide purchaser for value without notice – is a term used predominantly in common law jurisdictions in the law of real property and personal property to refer to an innocent party who purchases property without notice of any other party's claim to the title of that property. A BFP must purchase for value, meaning that he or she must pay for the property rather than simply be the beneficiary of a gift. Even when a party fraudulently conveys property to a BFP, that BFP will, depending on the laws of the relevant jurisdiction, take good (valid) title to the property despite the competing claims of the other party. As such, an owner publicly recording his or her own interests protects himself or herself from losing those to an indirect buyer, such as a qualifying buyer from a thief, who qualifies as a BFP. Moreover, so-called "race-notice" jurisdictions require the BFP himself or herself to record to enforce his or her rights. In any case, parties with a claim to ownership in the property will retain a cause of action against the party who made the fraudulent conveyance. 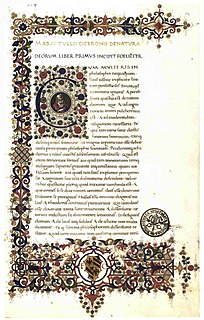 Publius Juventius Celsus Titus Aufidius Hoenius Severianus — the son of a little-known jurist of the same name, hence also Celsus filius — was, together with Julian, the most influential ancient Roman jurist of the High Classical era.

Ius or Jus in ancient Rome was a right to which a citizen (civis) was entitled by virtue of his citizenship (civitas). The iura were specified by laws, so ius sometimes meant law. As one went to the law courts to sue for one's rights, ius also meant justice and the place where justice was sought.

Contra principia negantem non est disputandum is a principle of logic and law: in order to debate reasonably about a disagreement, there must be agreement about the principles or facts by which to judge the arguments.

Bruton v London and Quadrant Housing Trust[1999] UKHL 26 is an English land law case that examined the rights of a 'tenant' in a situation where the 'landlord', a charitable housing association had no authority to grant a tenancy, but in which the 'tenant' sought to enforce the duty to repair on the association implied under landlord and tenant statutes. The effect of the case is to create the relationship of de facto landlord and tenant between the parties.

A fideicommissum is a type of bequest in which the beneficiary is encumbered to convey parts of the decedent's estate to someone else. For example, if a father leaves the family house to his firstborn, on condition that she will it to her first child. It was one of the most popular legal institutions in ancient Roman Law for several centuries. The word is a conjunction of the Latin words fides (trust) and committere, and thus denotes that something is committed to one's trust.

Shogun Finance Ltd v Hudson [2003] UKHL 62 is an English contract law case decided in the House of Lords, on the subject of mistaken identity as a basis for rescission of a contract. The case has been the subject of much criticism in failing to effectively clarify the area of mistake to identity.

Ultra posse nemo obligatur is a Latin legal term, meaning, "No one is obligated beyond what he is able to do."

This collection of lists of law topics collects the names of topics related to law. Everything related to law, even quite remotely, should be included on the alphabetical list, and on the appropriate topic lists. All links on topical lists should also appear in the main alphabetical listing. The process of creating lists is ongoing – these lists are neither complete nor up-to-date – if you see an article that should be listed but is not, please update the lists accordingly. You may also want to include Wikiproject Law talk page banners on the relevant pages.

Nulla poena sine culpa or the guilt principle is a legal principle requiring that one cannot be punished for something that they are not guilty of. It is recognized as a human right by the Court of Justice of the European Union and all Council of Europe member states. Under this principle, a person can not be punished if he or she is not guilty. Cases of force majeure or necessity are exempted from criminal responsibility. Furthermore, it establishes that no one can be liable for the crimes committed by another person.

The dictionary definition of brocard at Wiktionary