Ubi periculum is a papal bull promulgated by Pope Gregory X during the Second Council of Lyon on 7 July 1274 that established the papal conclave format as the method for selecting a pope, [1] specifically the confinement and isolation of the cardinals in conditions designed to speed them to reach a broad consensus. Its title, as is traditional for such documents, is taken from the opening words of the original Latin text, Ubi periculum maius intenditur, 'Where greater danger lies'. Its adoption was supported by the hundreds of bishops at that council over the objections of the cardinals. [2] [3] The regulations were formulated in response to the tactics used against the cardinals by the magistrates of Viterbo during the protracted papal election of 1268–1271, which took almost three years to elect Gregory X. In requiring that the cardinals meet in isolation, Gregory was not innovating but implementing a practice that the cardinals had either adopted on their own initiative or had forced upon them by civil authorities. After later popes suspended the rules of Ubi periculum and several were elected in traditional elections rather than conclaves, Pope Boniface VIII incorporated Ubi periculum into canon law in 1298. [4]

The goal of Ubi periculum was to limit dilatory tactics and distractions within papal elections, and outside intrusions which might impinge upon the freedom of the electors; it was certainly intended to produce faster outcomes, and, by making the rules more explicit and detailed, to reduce the chances of schism and disputed elections. The imposition of monastic-style modes of living inside the conclave may also have been intended to lift the minds of the electors out of the everyday business of governing the church, and focus their attention on the spiritual importance of their activity. [5]

At five of the nine papal elections that were held between 1198 and 1271, inclusive, the participating cardinals had worked in isolation under physical constraints that they chose or had forced on them. [lower-alpha 1] In 1198 they sequestered themselves with the rationale that they needed "to be free and safe in their deliberations". [6] In 1241, Rome was under siege and civic officials isolated the cardinals to force the prompt election of a pope who could negotiate with the city's attackers. [7] For the three elections where the cardinals were sequestered in Rome, they used the same location, the Septizodium, as if the practice were becoming traditional. [8] At the most recent, lengthy election in Viterbo, the local authorities had not held the cardinals incommunicado, but had restricted their movements and controlled their access to food. [9] In other respects the procedures established by Ubi periculum appear to have derived from the election procedures of the Dominican constitution of 1228 as well as the communes of Venice (1229) and Piacenza (1233). [10]

Gregory first required that procedures already established be maintained, citing specifically those of Alexander III, which meant that election requires the votes of two-thirds of the cardinals present. [11] [12] In Ubi periculum Gregory specified further that: [1] [13] [14]

The first election following Ubi periculum observed its rules and took only one day, 20-21 January 1276, to elect Innocent V. [15] The application of Ubi periculum, however, was suspended by his successor Pope Adrian V in consultation with the cardinals in order to make adjustments based on the conclave of January 1276, an effort that ended with Adrian's death just thirty-nine days after his election. [15] His successor John XXI revoked Ubi periculum on 20 September 1276, announced he would issue a substitute set of regulations, but failed to do so before his death in May 1277. [16] The elections–not proper conclaves–of 1277, 1280–1281, 1287–1288, and 1292–1294 were long and drawn out, lasting 7, 6, 11, and 27 months respectively. [10] [lower-alpha 2] Pope Celestine V, a Benedictine monk who had not been a cardinal, reinstituted the rules of ubi periculum. Unlike most of his predecessors, he was free to act independently rather than court the support of the cardinals. He was elected in July 1294, reintroduced the rules in September, and abdicated in December. [1] [10] [lower-alpha 3] Pope Benedict XI, elected in 1303 at the second conclave to follow Celestine's withdrawal, documented how the conclave that elected him followed Ubi periculum precisely. [19]

In 1311 Pope Clement V reaffirmed the rules of Ubi periculum in Ne Romani. He reiterated that the power of the College remained strictly limited during an interregnum and authorized local diocesan authorities in whose jurisdiction a conclave met to force the cardinals to adhere to conclave procedures. [6] 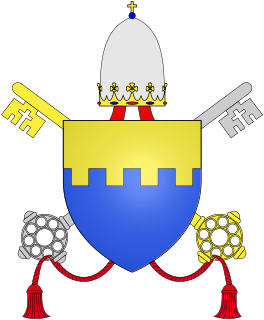 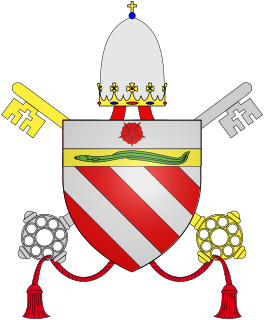 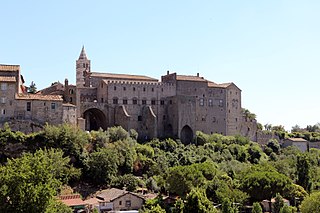 Palazzo dei Papi is a palace in Viterbo, northern Latium, Italy. It is one of the most important monuments in the city, situated alongside the Duomo di Viterbo. The Papal Curia was moved to Viterbo in 1257 by Alexander IV, due to the hostility of the Roman commune and constant urban violence: the former bishop's palace of Viterbo was enlarged to provide the Popes with an adequate residence. The construction, commissioned by the Capitano del popolo Raniero Gatti, provided a great audience hall communicating with a loggia raised on a barrel vault above the city street. It was completed probably around 1266.

The 1268–1271 papal election, following the death of Pope Clement IV, was the longest papal election in the history of the Catholic Church. This was due primarily to political infighting between the cardinals. The election of Teobaldo Visconti as Pope Gregory X was the first example of a papal election by "compromise", that is, by the appointment of a committee of six cardinals agreed to by the other remaining ten. The election occurred more than a year after the magistrates of Viterbo locked the cardinals in, reduced their rations to bread and water, and removed the roof of the Palazzo dei Papi di Viterbo.

The 1277 papal election, convened in Viterbo after the death of Pope John XXI, was the smallest papal election since the expansion of suffrage to cardinal-priests and cardinal-deacons, with only seven cardinal electors. Because John XXI had revoked Ubi periculum, the papal bull of Pope Gregory X establishing the papal conclave, with his own bull Licet felicis recordationis, the cardinal electors were able to take their time. After six months of deliberation, the cardinals eventually elected their most senior member Giovanni Gaetano Orsini as Pope Nicholas III. From the end of the election until Nicholas III's first consistory on March 12, 1278, the number of living cardinals—seven—was the lowest in the history of the Roman Catholic Church.

The 1285 papal election, convened in Viterbo after the death of Pope Martin IV, elected Cardinal Giacomo Savelli, who took the name of Honorius IV. Because of the suspension of the Constitution Ubi periculum by Adrian V in 1276, this election was technically, perhaps, not a papal conclave. In fact, for the first time since the tedious Election of 1268–1271, the meetings were dominated neither by the Hohenstaufen nor Charles I of Naples. It may even be that the cardinals proceeded so swiftly to an election with the intention of forestalling any intervention from Naples.

The January 1276 papal conclave, was the first papal election held under the rules of constitution Ubi periculum issued by Pope Gregory X in 1274, which established papal conclaves. According to Ubi periculum Cardinals were to be secluded in a closed area; they were not even accorded separate rooms. No cardinal was allowed to be attended by more than one servant unless ill. Food was to be supplied through a window; after three days of the meeting, the cardinals were to receive only one dish a day; after five days, they were to receive just bread and water. During the conclave, no cardinal was to receive any ecclesiastical revenue. These provisions were regularly disregarded, at the discretion of the cardinals, particularly the requirement of being incommunicado. 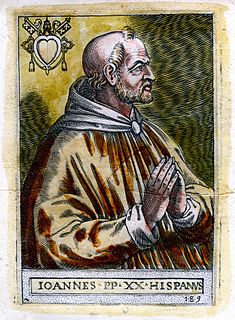 The 1241 papal election saw the election of Cardinal Goffredo da Castiglione as Pope Celestine IV. The election took place during the first of many protracted sede vacantes of the Middle Ages, and like many of them was characterized by disputes between popes and the Holy Roman Emperor. Specifically, the election took place during the war between Frederick II, Holy Roman Emperor and the Lombard League and deceased pontiff, Pope Gregory IX, with Italy divided between pro-Papal and pro-Imperial factions known as the Guelphs and Ghibellines. 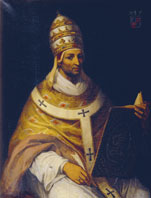 The 1314–16 papal conclave, held in the apostolic palace of Carpentras and then the Dominican house in Lyon, was one of the longest conclaves in the history of the Roman Catholic Church and the first conclave of the Avignon Papacy. The length of the conclave was due to the division of the cardinals into three factions: Italian, Gascon, and French/Provençal. 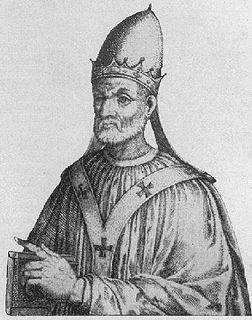