Team of priests in solidum

In 1983 the Catholic Church introduced the possibility of entrusting the pastoral care, of one or more parishes to a team of priests in solidum. This provision in the 1983 Code of Canon Law, which resembles ancient models of pastoral care in the Roman titular churches with their colleges of priests, was introduced to help resolve some of the difficulties facing many dioceses. These difficulties include shortages of priests, overpopulated urban parishes, depleted and scattered rural parishes, and decline in attendance at Mass. This model of pastoral care is viewed as a practical way of promoting pastoral co-responsibility, as well as fostering a greater sense of the presbyterium among the priests of a diocese.

Pastoral care is an ancient model of emotional, social and spiritual support that can be found in all cultures and traditions. The term is considered inclusive of distinctly non-religious forms of support as well as of those from religious communities.

Canon 517 § 1 of the 1983 Code of Canon Law, provides a generic norm for constituting a team of priests to look after one or more parishes; ubi adiuncta id requirant (when circumstances require it), which concedes flexibility to the diocesan bishop in organising the structures for pastoral care within his diocese: "When circumstances require it, the pastoral care of a parish or of different parishes together can be entrusted to several priests in solidum, with the requirement, however, that in exercising pastoral care one of them must be the moderator, namely, the one who is to direct the joint action and to answer for it to the bishop." However, the Codifying Commission responsible for drafting the canons on in solidum pastoral care expressed that it should be considered an "exceptional" provision. [1]

Nature of the team

A juridical person is a non-human legal entity, in other words any organization that is not a single natural person but is authorized by law with duties and rights and is recognized as a legal person and as having a distinct identity. This includes any incorporated organizations including corporations, government agencies, and NGOs. Also known as artificial person, juridical entity, juridic person, juristic person, or legal person.

It is generally agreed that a single parochial office for the pastoral care of the entrusted parish or parishes is conferred upon all priests in the team. However, the modus procendi (way of proceeding) for exercising the office is only grasped when the juridical principle in solidum is understood. The legal term originates in the Roman law of Obligations; where entering into an in solidum agreement involved a high degree of risk. For if one creditor had received all that was due, or one debtor had paid all, there was no subsequent right of contribution by the others.

Diverse juridical methods were developed as a means of avoiding personal loss from entering into in solidum agreements. Amongst these was the forming of societates (societies) or partnerships which were created by mutual consent and characterised by a binding commitment to fraternitas (fraternity) and established prior to entering into in solidum agreements. The eminent canonist, Eugenio Corecco has suggested that in solidum in the context of parochial care, analogously reflects the diverse but still collective responsibility of all the members of the presbyterium of a particular Church. [2]

Eugenio Corecco was a Swiss bishop of the diocese of Lugano. He was a notable 20th century canonist who wrote about the theology of canon law.

Rights and duties of the moderator

The principal role of the moderator is directing the team's common action, holding responsibility for that common action before the diocesan bishop, and directing the exercise of faculties held by all of the team members. [4] The moderator is also entrusted with the juridical representation of the parish or parishes. [5] However, this does not automatically entitle him the administrator of parochial goods, and hence the necessity of a provision of particular law. His relationship to the parochial pastoral and finance councils [6] should also be established in particular law.

Rights and duties of the priests

The diocesan bishop needs to determine what particular qualities are required for this parochial office. It is strongly recommended that the bishop establish with the team, a division of pastoral tasks in a common plan, which should be outlined in each priest's decree of appointment. Questions surrounding the obligation of Residence and Community life also need to be clarified, [7] as well consideration of the in solidum obligation to celebrate the missa pro populo. [8]

Finally, the cessation from ecclesiastical office by any one member of the group in solidum does not render the parochial office vacant. [9]

A deanery is an ecclesiastical entity in the Roman Catholic Church, the Anglican Communion, the Evangelical Church in Germany, and the Church of Norway. A deanery is either the jurisdiction or residence of a dean.

In English ecclesiastical law, the term incumbent refers to the holder of a Church of England parochial charge or benefice. The term "benefice" originally denoted a grant of land for life in return for services. In church law, the duties were spiritual ("spiritualities") and some form of assets to generate revenue were permanently linked to the duties to ensure the support of the office holder. Historically, once in possession of the benefice, the holder had lifelong tenure unless he failed to provide the required minimum of spiritual services or committed a moral offence. With the passing of the Pastoral Measure 1968 and subsequent legislation, this no longer applies, and many ancient benefices have been joined together into a single new one.

The priesthood is one of the three holy orders of the Catholic Church, comprising the ordained priests or presbyters. The other two orders are the bishops and the deacons. Only men are allowed to receive holy orders.

In the canon law of the Catholic Church, an oratory is a place which is set aside by permission of an ordinary for divine worship, for the convenience of some community or group of the faithful who assemble there, but to which other members of the faithful may have access with the consent of the competent superior. The word "oratory" comes from the Latin verb orare, to pray.

The Roman Catholic Diocese of Boac is a diocese of the Latin Church of the Catholic Church in the Philippines.

A moderator of the curia, under the authority of the bishop of a diocese in the Catholic Church, coordinates the exercise of the administrative duties and oversees those who hold offices and minister in diocesan administration. He must be a priest. The office has been variously described as equivalent to a chief operating officer (COO). Although the office was first included in the 1983 Code of Canon Law, the concept is much older. 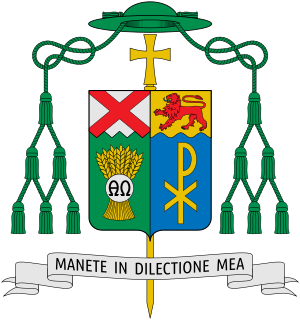 Robert McGuckin since July 2012 has been the Catholic Bishop of Toowoomba.

Oscar Sarlinga is an Argentinian bishop, born in Buenos Aires city on May 20, 1963. He did his primary studies at Nuestra Señora de Luján School, in San Andrés de Giles, and secondaries in Fray Mamerto Esquiu School, in that same city. He has also a degree in French Language Studies at the Alliance Française of Buenos Aires, Italian Language and Literature from Dante Alighieri Academy and several other languages.