The term Extravagantes (from the Latin extra, outside; vagari, to wander) is applied to the canon law of the Roman Catholic Church, to designate some papal decretals not contained in certain canonical collections which possess a special authority. More precisely, they are not found in Gratian's Decretum or the three official collections of the Corpus Juris Canonici (the Decretals of Gregory IX , the Sixth Book of the Decretals , and the Clementines ).

The term was first applied to those papal documents which Gratian had not inserted in his "Decree" (about 1140), but which, however, were binding upon the whole Church, also to other decretals of a later date, and possessed of the same authority. Bernardus Papiensis designated under the name of "Breviarium Extravagantium", or Digest of the "Extravagantes", the collection of papal documents which he compiled between 1187 and 1191. Even the Decretals of Gregory IX (published 1234) were long known as the "Liber" or "Collectio Extra", i.e. the collection of the canonical laws not contained in the "Decree" of Gratian. This term is now applied to the collections known as the "Extravagantes Joannis XXII" and the "Extravagantes communes", both of which are found in all editions of the "Corpus Juris Canonici".

When Pope John XXII (1316-1334) published the decretals known as the Clementines, there already existed some pontifical documents binding upon the whole Church but not included in the "Corpus Juris". This is why these Decretals were called "Extravagantes". Their number was increased by the inclusion of all the pontifical laws of later date, added to the manuscripts of the "Corpus Juris", or gathered into separate collections. In 1325 Zenselinus de Cassanis added a gloss to twenty constitutions of Pope John XXII, and named this collection "Viginti Extravagantes pap Joannis XXII".

The others were known as "Extravagantes communes", a title given to the collection by Jean Chappuis in the Paris edition of the "Corpus Juris" (1499 1505). He adopted the systematic order of the official collections of canon law, and classified in a similar way the "Extravagantes" commonly met with (hence "Extravagantes communes") in the manuscripts and editions of the "Corpus Juris". This collection contains decretals of the following popes the regnal years of whom span two hundred years, from 1281 to 1482: Martin IV, Boniface VIII (notably the celebrated Bull Unam Sanctam ), Benedict XI, Clement V, John XXII, Benedict XII, Clement VI, Urban V, Martin V, Eugene IV, Callistus III, Paul II, Sixtus IV. Chappuis also classified the "

These two collections have no official value. On the other hand, many of the decretals included in them contain legislation binding upon the whole Church, e.g. the Constitution of Paul II, "Ambitios", which forbade the alienation of ecclesiastical goods. This, however, is not true of all of them; some had even been formally abrogated at the time when Chappuis made his collection; three decretals of John XXII, are reproduced in both collections.

Both the collections were printed in the official (1582) edition of the "Corpus Juris Canonici". This explains the favour they enjoyed among canonists.

Religious law includes ethical and moral codes taught by religious traditions. Different religious systems hold sacred law in a greater or lesser degree of importance to their belief systems, with some being explicitly antinomian whereas others are nomistic or "legalistic" in nature. In particular, religions such as Judaism, Islam and the Baháʼí Faith teach the need for revealed positive law for both state and society, whereas other religions such as Christianity generally reject the idea that this is necessary or desirable and instead emphasise the eternal moral precepts of divine law over the civil, ceremonial or judicial aspects, which may have been annulled as in theologies of grace over law.

The Apostolic Canons or Ecclesiastical Canons of the Same Holy Apostles or Canons of the Holy Apostles is a 4th-century Syrian Christian text. It is an Ancient Church Order, a collection of ancient ecclesiastical decrees concerning the government and discipline of the Early Christian Church, allegedly written by the Apostles first found as the last chapter of the eighth book of the Apostolic Constitutions. Like the other Ancient Church Orders, the Apostolic Canons use a pseudepigraphic form.

Dominium mundi is an idea of universal dominion developed in the Middle Ages. Inspired by the memory of the Roman Empire, dominium mundi implied the recognition of one supreme authority, which generated a prolonged political and spiritual struggle between imperial and ecclesiastical power. This struggle can be said to have begun with the Investiture Controversy, and was mainly embodied by the Holy Roman Empire and Catholic Church, which elevated the emperor and Pope, respectively, to the status of supreme ruler. The idea of universal dominion divided Italy into the warring faction of Guelphs and Ghibellines. Guelphs supported the Church, while Ghibellines supported the Empire. After two hundred years of division during the 12th and 13th centuries, neither of the powers had prevailed, due to their mutual dependency and the rise of the powerful and practically independent reigns of Church and the State. The idea of dominium mundi did not reappear in its original form, despite the fact that both universal powers subsisted. 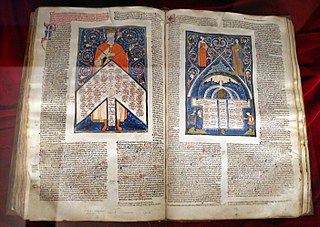 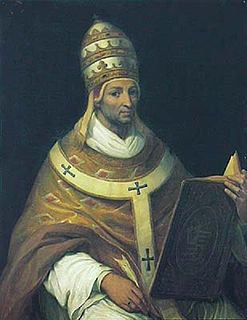 Spondent Pariter was a papal decretal promulgated in 1317 by Pope John XXII forbidding the practice of alchemy. The rationale provided for the ban in the decretal is not a specifically theological one, but instead a moral condemnation, with the Pope expounding how fraudulent alchemists exploited the poor and charging them with knowingly engaging in falsehood.

Promulgation in the canon law of the Catholic Church is the publication of a law by which it is made known publicly, and is required by canon law for the law to obtain legal effect. Universal laws are promulgated when they are published in Acta Apostolicae Sedis, and unless specified to the contrary, obtain legal force three months after promulgation. Particular laws are promulgated in various ways but by default take effect one month after promulgation.

The word "canon" comes from the Greek kanon, which in its original usage denoted a straight rod that was later the instrument used by architects and artificers as a measuring stick for making straight lines. Kanon eventually came to mean a rule or norm, so that when the first ecumenical council—Nicaea I—was held in 325, kanon started to obtain the restricted juridical denotation of a law promulgated by a synod or ecumenical council, as well as that of an individual bishop.