Disparity of cult, sometimes called disparity of worship (Disparitas Cultus), is a diriment impediment in Roman Catholic canon law: a reason why a marriage cannot be validly contracted without a dispensation, stemming from one person being certainly baptized, and the other certainly not baptized.

The reasons for this impediment is that the marriage will not be a sacrament with one spouse unbaptized, that the unbaptized person's views on marriage may be incompatible with the Catholic views, and that such a marriage may hinder the practice of religion on part of the Catholic spouse and any children.

Disparity of worship does not affect the marriage of a Catholic or baptized non-Catholic with one whose baptism, even after careful investigation concerning the baptismal ceremony or its validity, remains doubtful. Neither does it in any way influence the marriage of two who, after diligent examination, are still considered doubtfully baptized. [1]

A marriage between a Catholic and a baptized non-Catholic is a mixed marriage. Though sometimes referred to by this term, the permission of the bishop is required merely to make the union licit; the marriage is valid but illicit without it. 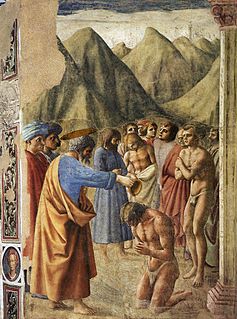 Baptism is a Christian rite of admission and adoption, almost invariably with the use of water, into Christianity. It may be performed by sprinkling or pouring water on the head, or by immersing in water either partially or completely. The synoptic gospels recount that John the Baptist baptised Jesus. Baptism is considered a sacrament in most churches, and as an ordinance in others. Baptism according to the Trinitiarian formula, which is done in most mainstream Christian denominations, is seen as being a basis for Christian ecumenism, the concept of unity amongst Christians. Baptism is also called christening, although some reserve the word "christening" for the baptism of infants. It has also given its name to the Baptist churches and denominations.

In Christian denominations that practice infant baptism, confirmation is seen as the sealing of Christianity created in baptism. It is an affirmation of commitment and belief. Those being confirmed are known as confirmands. 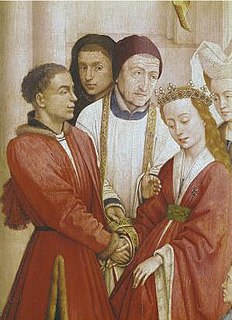 Marriage in the Catholic Church, also called matrimony, is the "covenant by which a man and woman establish between themselves a partnership of the whole of life and which is ordered by its nature to the good of the spouses and the procreation and education of offspring", and which "has been raised by Christ the Lord to the dignity of a sacrament between the baptised." Catholic matrimonial law, based on Roman law regarding its focus on marriage as a free mutual agreement or contract, became the basis for the marriage law of all European countries, at least up to the Reformation.

Valid but illicit and valid but illegal are descriptions applied in Catholic Church to an unauthorized celebration of a sacrament or an improperly placed juridic act that nevertheless has effect. Validity is presumed whenever an act is performed by a qualified person and includes those things which essentially constitute the act itself as well as the formalities and requirements imposed by law for the validity of the act.

Baptism of desire is a teaching of the Anglican Communion, Lutheran Church and Roman Catholic Church explaining that those who desire baptism, but are not baptized with water through the Christian Sacrament because of death, nevertheless receive the fruits of Baptism at the moment of death if their grace of conversion included "divine and catholic faith", an internal act of perfect charity, and perfect contrition by which their soul was cleansed of all sin. Hence, the Catechism of the Catholic Church observes, "For catechumens [those instructed in the Catholic faith who are preparing to be baptized into the Catholic Church] who die before their Baptism, their explicit desire to receive it, together with repentance for their sins, and charity, assures them the salvation that they were not able to receive through the sacrament".

Conversion to Christianity is the religious conversion of a previously non-Christian person to Christianity. Different sects of Christianity may perform various different kinds of rituals or ceremonies on a convert in order to initiate them into a community of believers. The most commonly accepted ritual of conversion in Christianity is through baptism, but this is not universally accepted among Christian denominations. A period of instruction and study almost always ensues before a person is formally converted into Christianity, but the length of this period varies, sometimes as short as a few weeks and possibly less, and other times, up to as long as a year or possibly more.

An emergency baptism is a baptism administered to a person in danger of death. This can be done by a person not normally authorized to administer the sacraments.

Rebaptism in Christianity is the baptism of a person who has previously been baptized, usually in association with a denomination that does not recognize the validity of the previous baptism. When a denomination rebaptizes members of another denomination, it is a sign of significant differences in theology. Churches that practice exclusive adult baptism, including Baptists and Churches of Christ, rebaptize those who were baptized as infants because they do not consider infant baptism to be valid.

Marital conversion is religious conversion upon marriage, either as a conciliatory act, or a mandated requirement according to a particular religious belief. Endogamous religious cultures may have certain opposition to interfaith marriage and ethnic assimilation, and may assert prohibitions against the conversion of one their own claimed adherents. Conversely, they may require the marital conversion of those who wish to marry one of their adherents. 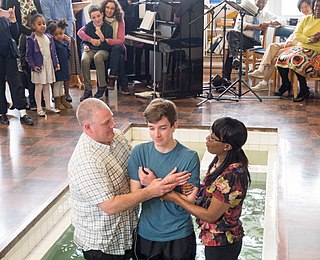 Believer's baptism is the Christian practise of baptism as is understood by many evangelical denominations, particularly those that descend from the Anabaptist and English Baptist tradition. According to their understanding, a person is baptized on the basis of his or her profession of faith in Jesus Christ and as admission into a local community of faith.