Di diritto pontificio is the Italian term for “of pontifical right”. It is given to the ecclesiastical institutions (the religious and secular institutes, societies of apostolic life) either created by the Holy See or approved by it with the formal decree, known by its Latin name, Decretum laudis [“decree of praise”]. [1]

The institutions of pontifical right depend immediately and exclusively on the Vatican in the matters of internal governance and discipline. [2]

Until the 19th century the religious communities were divided into two groups: regular orders with solemn vows and congregations of simple vows. Only those taking the solemn vows were valued by the Church and the civil authorities. [3]

In 1215, in the Fourth Lateran Council, Pope Innocent III decreed that no regular orders could be founded without papal approval. The bishops, however, retained the right to form communities whose members lived the religious life without taking formal vows. These groups later took the name of “congregations of simple vows”. [3]

The congregations of simple vows, especially women’s, were increasing dramatically during the 17th and 18th Centuries, and in the early 19th Century, many of them were seeking papal recognition from Rome. in 1816 the Holy See began to approve the congregations with simple vows but they were still not recognized as religious institutions. [4]

In 1854 Giuseppe Andrea Bizzarri, the Secretary of the Sacred Congregation for Consultations about Regulars, created on the behalf of Pope Pius IX a procedure for the approval of congregations of simple vows, which was communicated to the bishops in 1861. [4]

The distinction between the legal status of an institute of diocesan right and an institute of pontifical right was permanently drawn on 8 December 1900 by Conditae a Christo Ecclesiae [Latin, “Founded by the Church of Christ”], the apostolic constitution of Pope Leo XIII. [4]

An indult in Catholic canon law is a permission, or privilege, granted by the competent church authority – the Holy See or the diocesan bishop, as the case may be – for an exception from a particular norm of church law in an individual case, for example, members of the consecrated life seeking to be dispensed from their religious vows, or of priests and deacons who voluntarily seek to return to the lay state. An apostolic indult is needed from the local ordinary for presbyteral or diaconal ordinations done within a year before the normal date; if the ordination is done more than one year in advance of the normal date then a papal apostolic indult from the Holy See is also needed. 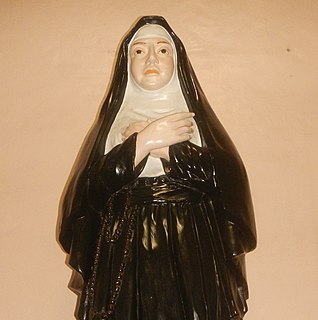 Ad universalis Ecclesiae is a papal constitution dealing with the conditions for admission to Catholic religious orders of men in which solemn vows were prescribed. It was issued by Pope Pius IX on 7 February 1862.

The Congregation of the Sons of the Holy Family of Jesus, Mary and Joseph is a Latin Institute of Consecrated Life for priests in the Catholic Church. The congregation is dedicated to educating the young and strengthening Catholic family life.