The Canon Law Society of America or CLSA is a professional association dedicated to the promotion of both the study and the application of canon law in the Catholic Church. The Society's membership includes over fifteen hundred men and women who reside in forty-three countries. Not all members are Catholic.

A group of canonists established the Canon Law Society of America on November 12, 1939, in Washington, DC, as a professional association, dedicated to the promotion of both the study and the application of canon law in the Catholic Church. The Society remains active in study and the promotion of canonical and pastoral approaches to significant issues within the Catholic Church, both the Latin or Roman Catholic Church and the Eastern Catholic Churches. Since its founding, and especially since Pope John XXIII called for the revision of the first Code of Canon Law of 1917, the Society has offered its services in the United States for the revitalization and proper application of church law. On February 13, 1981, the Society incorporated as a non-profit corporation in the District of Columbia. [1]

The Society organizes its activities through an annual general meeting, at which time it elects officers and determines resolutions for future study and activity by the Society. A "Board of Governors" oversees the operations of the Society. The Board is composed of elected officers: a president, a vice-president who is president-elect, an immediate past president, a secretary, a treasurer, and six consultors. [1]

The Society convenes an annual convention and other symposia. Collaboration with other professional church organizations and learned societies is another area of the Society's involvements. Regional meetings of members of the Society also are held periodically across the United States.

The Society publishes various works in order to promote greater understanding and application of canon law. 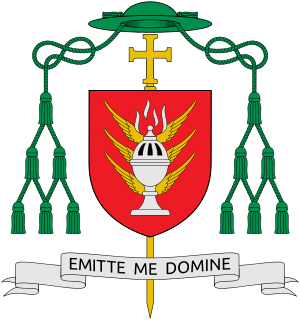 Joseph Nathaniel Perry is an American prelate of the Roman Catholic Church who serves as auxiliary bishop for the Archdiocese of Chicago.

The Alabama State Bar is the integrated (mandatory) bar association of the U.S. state of Alabama.

The Jurist: Studies in Church Law and Ministry or simply The Jurist is a peer-reviewed academic journal and the only journal published in the United States devoted to the study and promotion of the canon law of the Catholic Church. It was initiated in 1940 to serve the academic and professional needs of Catholic church lawyers. It originally focused on the canon law of the Latin Church, but came to include Eastern Catholic canon law as well.

The National Council of Women of the United States (NCW/US) is the oldest nonsectarian organization of women in America. Officially founded in 1888, the NCW/US is an accredited non-governmental organization (NGO) with the Department of Public Information (UN/DPI) and in Consultative Status with the Economic and Social Council of the United Nations (ECOSOC).

Robert Peter Deeley is an American prelate of the Roman Catholic Church currently serving as the Bishop of the Diocese of Portland, Maine.