Rufinus was an Italian canon lawyer, described as the most influential canonist at the University of Bologna in the mid 12th century. [1] He composed a Summa on Gratian's Decretum before 1159, [2] which soon became the most influential commentary in Bologna, surpassing all previous ones in detail and length. [3]

Stephen of Tournai, his pupil, quoted from his Summa several times. [4]

Pope Alexander III, born Roland, was the Bishop of Rome and hence head of the Catholic Church and ruler of the Papal States from 7 September 1159 until his death. A native of Bologna, Alexander became pope after a contested election, but had to spend much of his pontificate outside Rome while several rivals, supported by Holy Roman Emperor Frederick I Barbarossa, claimed the papacy. Alexander rejected Byzantine Emperor Manuel I Komnenos' offer to end the East–West Schism, sanctioned the Northern Crusades, and held the Third Council of the Lateran. 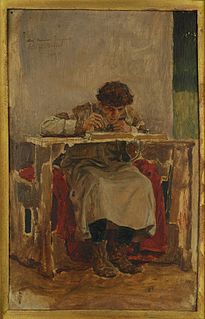 Irnerius, sometimes referred to as lucerna juris, was an Italian jurist, and founder of the School of Glossators and thus of the tradition of Medieval Roman Law.

Burchard of Worms was the bishop of the Imperial City of Worms, in the Holy Roman Empire. He was the author of a canon law collection of twenty books known as the Decretum, Decretum Burchardi, or Decretorum libri viginti.

Astesanus of Asti was an important Franciscan canon lawyer and theologian, from Asti in Piedmont. His major work is Summa de casibus conscientiae, a confessional work, in manuscript from around 1317 and comprising eight volumes and three indices. Its writing is said to have been at the prompting of Cardinal Giovanni Gaetano Orsini.

Henry of Segusio, usually called Hostiensis, was an Italian canonist of the thirteenth century, born at Susa (Segusio), in the ancient Diocese of Turin. He died at Lyon.

In the history of canon law, a decretist was a student and interpreter of the Decretum Gratiani. Like Gratian, the decretists sought to provide "a harmony of discordant canons", and they worked towards this through glosses (glossae) and summaries (summae) on Gratian. They are contrasted with the decretalists, whose work primarily focused on papal decretals.

Stephen of Tournai,, was a Canon regular of Sainte-Geneviève (Paris), and Roman Catholic canonist who became bishop of Tournai in 1192.

Bernardus Papiensis was an Italian canonist and bishop of the Christian Church.

Bartholomew of Brescia was an Italian canonist.

Johann Friedrich von Schulte was a German legal historian and professor of canon law who was born in Winterberg, Westphalia. He was a leading authority on Catholic canon law.

Simon of Bisignano was a teacher of canon law in Bologna in the 1170s. He composed a Summa on the Decretum Gratiani between March 1177 and March 1179. Like Paucapalea, he, too, might have been a student of Gratian himself.

Gabriel of Baṣra was a bishop and jurist of the Church of the East.