Ex corde Ecclesiae (English: From the heart of the Church) is an apostolic constitution issued by Pope John Paul II regarding Catholic colleges and universities. Promulgated on 15 August 1990 [1] and intended to become effective in the academic year starting in 1991, its aim was to define and refine the Catholicism of Catholic institutions of higher education. Institutions newly claiming to be Catholic would require affirmation from "the Holy See, by an Episcopal Conference or another Assembly of Catholic hierarchy, or by a diocesan bishop". Institutions currently claiming to be Catholic are considered Catholic, unless declared otherwise by the same. The document cites canon 810 [1] of the Code of Canon Law, [2] which instructs Catholic educational facilities to respect norms established by local bishops. Ex corde underscores the authority of bishops and mentions that canon law (canon 812) [2] requires all teachers of theology, in Catholic colleges and universities, to have the mandate of the local ecclesiastical authority (normally the local bishop).

The apostolic constitution was viewed as a rebuttal to the Land O'Lakes Statement,[ citation needed ] a 1967 position paper adopted by the participants of a seminar sponsored by University of Notre Dame on the role of Catholic universities. [3] Attendees at this American seminar included the following university presidents: University of Notre Dame, Georgetown, Seton Hall, Boston College, Fordham, St. Louis University, and the Pontifical Catholic University of Puerto Rico. Over a dozen other educators from North American Catholic institutions of higher education were also present. [3]

Pontifical Catholic University of Peru is a private university in Lima, Peru. It was founded in 1917 with the support and approval of the Catholic Church. The person who dealt the necessary formalities was Catholic priest Father Jorge Dintilhac SS.CC. This University was the Peru's first non-State institution of higher learning.

The Cardinal Newman Society is an American 501(c)(3) tax-exempt, nonprofit organization founded in 1993 whose stated purpose is to promote and defend faithful Catholic education. The organization is guided by Cardinal John Henry Newman's The Idea of a University and Pope John Paul II's 1990 Apostolic Constitution Ex Corde Ecclesiae. The organization publishes The Newman Guide to Choosing a Catholic College. However, it has been criticized for adopting views that Newman would have opposed. 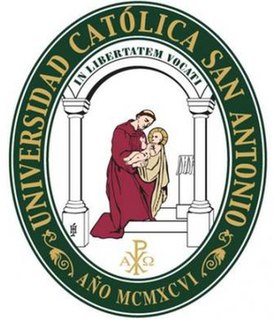 The Universidad Católica San Antonio, also known as the Universidad Católica de Murcia (UCAM), is a private university located in Murcia in south-eastern Spain. Founded in 1996 by José Luis Mendoza Pérez, a lay Catholic, with the permission of Bishop Javier Azagra Labiano of the Roman Catholic Diocese of Cartagena, UCAM offers undergraduate and graduate academic programs taught by faculty and researchers engaged with the quality of the education provided. The university is characterized by a firm commitment to Catholic orthodoxy and the moral and social doctrines of the Church. UCAM aims to contribute to the transmission of human knowledge and the development of research, from the critical, responsible and creative freedom of the person, according to gospel principles. UCAM developed a system of quality management applied to teaching, research and services to ensure the human relations among all members of the university community in order to make more effective educational work and research.

Veritatis gaudium is an apostolic constitution on ecclesiastical universities and faculties. It was signed by Pope Francis on 8 December 2017 and was promulgated on 29 January 2018. It updates the 1979 apostolic constitution Sapientia christiana. The document is 87 pages in length. The new norms take legal effect on the first day of the 2018-2019 academic year or of the 2019 academic year, depending on the school year of particular institutions. Implemention is the responsibility of the Catholic Church's 289 ecclesiastical faculties and the 503 related institutions that issue Vatican-recognized degrees.