A deanery (or decanate) is an ecclesiastical entity in the Roman Catholic Church, the Eastern Orthodox Church, the Anglican Communion, the Evangelical Church in Germany, and the Church of Norway. A deanery is either the jurisdiction or residence of a dean.

In the Catholic Church, Can.374 §2 of the Code of Canon Law grants to bishops the possibility to join together several neighbouring parishes into special groups, such as vicariates forane, or deaneries. [1]

Each deanery is headed by a vicar forane, also called a dean or archpriest, who is—according to the definition provided in canon 553 [2] —a priest appointed by the bishop after consultation with the priests exercising ministry in the deanery. Canon 555 defines the duties of a dean as: [2]

Additionally, the dean must follow the particular norms of the diocese. Canon 555 also particularly mentions that a dean must visit the parishes of the district in accord with the regulations made by the diocesan bishop. [2]

In the Church of England and many other Anglican churches a deanery is a group of parishes forming a district within an archdeaconry. The more formal term, rural deanery, is less often used, though the superintendent of a deanery is the Rural Dean. Rural deaneries are very ancient and originally corresponded with the hundreds. The title "dean" (Latin decanus) may derive from the custom of dividing a hundred into ten tithings. In medieval times rural deans acted as officers of the diocesan bishop, but archdeacons gradually took over most of their duties. However, the office was revived during the 19th century. Modifications to deanery boundaries may be made according to the provisions of the Archdeaconries and Rural Deaneries Act of 1874 (37 & 38 Vict., cap. 63). [3] [4]

The deanery synod has a membership of all clergy who are licensed to a parish within the deanery, plus elected lay members from every parish. They were established in the 1970s.

The term is also often used to refer to the house, or official residence, of the dean of a cathedral. The term is also used to apply to the ecclesiastical districts of Jersey and Guernsey, which are Royal Peculiars and whose deans hold a status more nearly equivalent to an Archdeacon than a rural dean. [5]

In the Episcopal Church, deaneries are synonymous with convocations and are headed by deans.

Deaneries also exist in the Eastern Orthodox Church, where they are subdivisions of a diocese. [6] [7] [8] 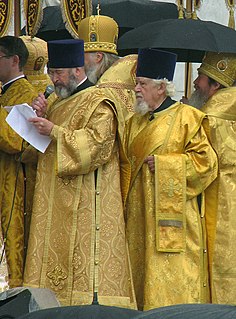 An archdeacon is a senior clergy position in the Church of the East, Chaldean Catholic Church, Syriac Orthodox Church, Anglican Communion, St Thomas Christians, Eastern Orthodox churches and some other Christian denominations, above that of most clergy and below a bishop. In the High Middle Ages it was the most senior diocesan position below a bishop in the Catholic Church. An archdeacon is often responsible for administration within an archdeaconry, which is the principal subdivision of the diocese. The Oxford Dictionary of the Christian Church has defined an archdeacon as "A cleric having a defined administrative authority delegated to him by the bishop in the whole or part of the diocese." The office has often been described metaphorically as that of oculus episcopi, the "bishop's eye".

The ecclesiastical title of archpriest or archpresbyter belongs to certain priests with supervisory duties over a number of parishes. The term is most often used in Eastern Orthodoxy and the Eastern Catholic Churches and may be somewhat analogous to a monsignor in the Latin Church, but in the Eastern churches an archpriest wears an additional vestment and, typically, a pectoral cross, and becomes an archpriest via a liturgical ceremony.

In 1983 the Catholic Church introduced the possibility of entrusting the pastoral care, of one or more parishes to a team of priests in solidum. This provision in the 1983 Code of Canon Law, which resembles ancient models of pastoral care in the Roman titular churches with their colleges of priests, was introduced to help resolve some of the difficulties facing many dioceses. These difficulties include shortages of priests, overpopulated urban parishes, depleted and scattered rural parishes, and decline in attendance at Mass. This model of pastoral care is viewed as a practical way of promoting pastoral co-responsibility, as well as fostering a greater sense of the presbyterium among the priests of a diocese.