Last updated October 05, 2020
Formal visit of a bishop to the pope every five years

In the Catholic Church, a quinquennial visit ad limina, more fully ad limina apostolorum or simply an ad limina visit, means the obligation of residential diocesan bishops and certain prelates with territorial jurisdiction (such as territorial abbots), of visiting the thresholds of the [tombs of the] Apostles, Saints Peter and Paul, and of meeting the pope to report on the state of their dioceses or prelatures. It is a formal trip usually made together by all bishops from a single region (viz., an episcopal conference) to discuss with the Pope issues specific to their regions. It is separate from other trips a bishop might make to the Vatican, such as to attend a synod. The ad limina visit happens every five years, or quinquennially.

Limina is the accusative plural of the Latin language noun limen, meaning literally "a threshold; the head-piece or foot-piece of a doorway," and in a transferred sense, "a house, dwelling, abode." The Latin preposition ad means "to, toward, at."

In 1585 Pope Sixtus V [ inconsistent ] issued the constitution Romanus Pontifex [ inconsistent ], which set forth the norm for visits ad limina.[ citation needed ] On December 31, 1909, Pope Pius X stated in a Decree for the Consistorial Congregation that a bishop needs to deliver an account of the state of his diocese to the pope once every five years, starting in 1911.[ citation needed ]

The current requirements for the ad limina visit are the subject of canon 399–400 of the 1983 Code of Canon Law and canon 208 of the 1990 Code of Canons for the Eastern Churches .

Dónal McKeown is a prelate of the Roman Catholic Church and Bishop of Derry in Ireland. He previously served as Titular Bishop of Cell Ausaille and auxiliary bishop in The Diocese of Down and Connor. 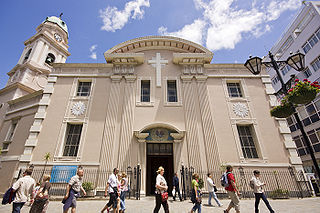 The Roman Catholic Diocese of Gibraltar is a diocese of the Latin Church of the Roman Catholic Church in the British overseas territory of Gibraltar. The Latin name for the diocese is Dioecesis Gibraltariensis. About twenty priests and nine sisters serve in the diocese. Carmelo Zammit was installed as bishop on 24 September 2016. At just over 6 square kilometers, it is among the smallest of all Catholic dioceses in the world.

John Richard Keating was an American clergyman of the Roman Catholic Church. He served as Bishop of Arlington from 1983 until his death in 1998.

The Dedication of the Basilicas of the Apostles Peter and Paul is a feast day on the liturgical calendar of the Catholic Church, which is celebrated on 18 November.

Gregory Lawrence Parkes is a bishop of the Catholic Church in the United States. He is serving as the fifth bishop of the Diocese of St. Petersburg in the state of Florida since 2017. 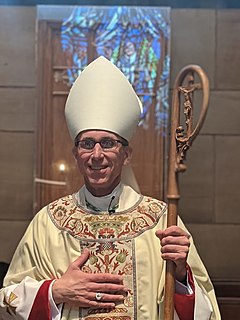 Donald Edward DeGrood is an American prelate of the Catholic Church who is the bishop of the Diocese of Sioux Falls.