Glossary of the Catholic Church

The Pastoral Provision is a set of practices and norms in the Catholic Church in the United States, by which bishops are authorized to provide spiritual care for Catholics converting from the Anglican tradition, by establishing parishes for them and ordaining priests from among them. The provision provides a way for individuals to become priests in territorial dioceses, even after Pope Benedict XVI's Anglicanorum Coetibus proclamation established the Personal Ordinariates, a non-diocesan mechanism for former Anglicans to join the Church. 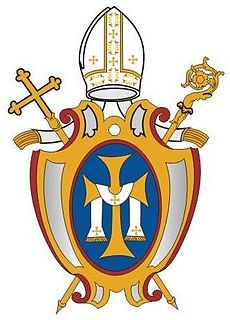 In Christianity, the term secular clergy refers to deacons and priests who are not monastics or otherwise members of religious life. A secular priest is a priest who commits themselves to a certain geographical area and is ordained into the service of the citizens of a diocese, a church administrative region. That includes serving the everyday needs of the people in parishes, but their activities are not limited to that of their parish.

A curia is an official body that governs an entity within the Catholic Church. These curias range from the relatively simple diocesan curia; to the larger patriarchal curias; to the curia of various Catholic particular churches; to the Roman Curia, which is the central government of the Catholic Church. Other Catholic bodies, such as religious institutes, may also have curias.