The Venerable is used as a style or epithet in several Christian churches.

In the Catholic Church, after a deceased Catholic has been declared a Servant of God by a bishop and proposed for beatification by the Pope, such a servant of God may next be declared venerable ("heroic in virtue") during the investigation and process leading to possible canonization as a saint. A declaration that a person is venerable, however, is not a pronouncement of their definitely being in Heaven. The pronouncement means it is considered likely that they are in heaven, but it is possible the person could still be undergoing purgation ("purgatory"). Before a person is considered to be venerable, that person must be declared as such by a proclamation, approved by the Pope, of having lived a life that was "heroic in virtue", the virtues being the theological virtues of faith, hope, and charity and the cardinal virtues of prudence, justice, fortitude, and temperance. The next steps are beatification, which normally requires a miracle by the intercession of the candidate, from which point the person is referred to as The Blessed. The blessed declaration very strongly implies the person is in heaven experiencing the beatific vision, but it is not actually infallible. Finally, the canonization process is consummated when the person intercedes in a miracle (normally, this is their second intercession) and the person is declared a saint . Exceptions to this pathway of canonization do exist. [1] The declaration of sainthood is definitive (infallible) only to the extent that the Catholic Church claims the person died in the state of grace and already enjoys beatific vision. [2]

The 7th/8th century English monk St Bede was referred to as venerable soon after his death and is still very often called "the Venerable Bede" despite having been canonized in 1899.

This is also the honorific used for hermits of the Carthusian Order, in place of the usual term of "Reverend".

In the Anglican Communion, "The Venerable" (abbreviated as "the Ven.") is the style usually given to an archdeacon. [4]

In the Orthodox Church the term "Venerable" is commonly used as the English-language translation of the title given to monastic saints (Greek: hosios, Church Slavonic: prepodobni; both Greek and Church Slavonic forms are masculinum).

A monastic saint who was martyred for the Orthodox faith is referred to as "Venerable Martyr" or hosiomartyr.

In the 20th century, some English-language Orthodox sources began to use the term "Venerable" to refer to a righteous person who was a candidate for glorification (canonization), most famously in the case of Saint John of Shanghai and San Francisco; however, this has not altered the original usage of this term in reference to monastic saints.

In religious belief, a saint is a person who is recognized as having an exceptional degree of holiness, likeness, or closeness to God. However, the use of the term "saint" depends on the context and denomination. In Catholic, Eastern Orthodox, Anglican, Oriental Orthodox, and Lutheran doctrine, all of their faithful deceased in Heaven are considered to be saints, but some are considered worthy of greater honor or emulation; official ecclesiastical recognition, and consequently a public cult of veneration, is conferred on some saints through the process of canonization in the Catholic Church or glorification in the Eastern Orthodox Church.

Beatification is a recognition accorded by the Catholic Church of a deceased person's entrance into Heaven and capacity to intercede on behalf of individuals who pray in his or her name. Beati is the plural form, referring to those who have undergone the process of beatification; they possess the title of "Blessed" before their names and are often referred to in English as "a Blessed" or, plurally, "Blesseds". 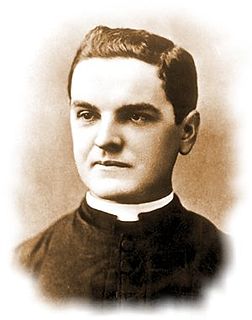 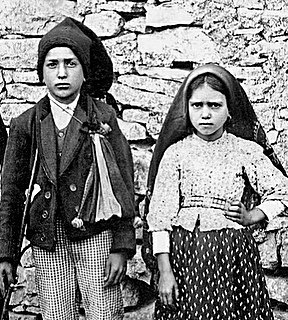 Francisco de Jesus Marto and Jacinta de Jesus Marto were siblings from Aljustrel, a small hamlet near Fátima, Portugal, who with their cousin Lúcia dos Santos (1907–2005) witnessed three apparitions of the Angel of Peace in 1916 and several apparitions of the Blessed Virgin Mary at Cova da Iria in 1917. The title Our Lady of Fátima was given to the Virgin Mary as a result, and the Sanctuary of Fátima became a major centre of world Christian pilgrimage.

"Servant of God" is a title used in the Catholic Church to indicate that an individual is on the first step toward possible canonization as a saint.

Devasahayam Pillai, known as Lazarus his baptismal name, is a beatified Indian layman of the Catholic Church. Born into a Hindu family in the 18th century, he converted to Catholicism and is considered a martyr of the Christian faith. Pillai was an official in the court of the King of Travancore, Maharaja Marthanda Varma, when he came under the influence of Dutch naval commander, Captain Eustachius De Lannoy, who instructed him in the Catholic faith. He is believed to have been killed by the Travancore state for upholding his Christian faith.

Nicola Saggio was an Italian Roman Catholic professed oblate of the Order of Minims.

Maria Cristina of the Immaculate Conception Brando, was an Italian nun and the founder of the Sisters, Expiatory Victims of Jesus in the Blessed Sacrament, an international teaching institute. She was confirmed for canonization in 2014 after Pope Francis approved a miracle that had been found to have been attributed to her intercession and was canonized by him on 17 May 2015.

María de la Purísima Salvat Romero, born María Isabel Salvat Romero, was a Spanish Roman Catholic nun and a member of the Sisters of the Company of the Cross. She assumed the name of "María de la Purísima of the Cross" after she entered that order. Romero was the successor of Angela of the Cross of the latter's congregation and was known for her firmness in the progress of the order and in their role as servants of God and His people. Romero was known in her order for her strong commitment to uphold the magisterium of the Church.