The Martyrs of Natal were a group of 30 Roman Catholic people of Colonial Brazil – two of them priests – killed in the northern part of the colony in massacres that a large group of Dutch Calvinists led. [1] One priest was a Colonial Brazilian Jesuit missionary, while the other priest was an evangelizer himself. The others were all lay Catholics, most of them anonymous members of the Church, some of them children. [2] [3] [4]

The 30 individuals were beatified in Saint Peter's Square on 5 March 2000. Pope Francis – on 23 March 2017 – signed a decree that approved their canonization while waiving the miracle required for sainthood; the date was formalized at a gathering of cardinals on 20 April and the group was canonized as saints on 15 October 2017.

The Natal region was colonized after the Portuguese Catholics arrived but the Dutch Calvinists soon took over and spread their anti-Catholic sentiment across the region, while making persecution of all remaining Catholics an objective for them. [1]

Despite the air of persecution some priests moved to the area in order to sustain the people in their faith.

André de Soveral was born in Brazil in 1572. He was a professed member of the Society of Jesus, having entered the Jesuits in 1593 and making his period of novitiate in Bahia. He studied Latin – as well as the native language – and theological studies before being sent to the college in Olinda. [2] His first experience in the missions was in Rio Grande do Norte in 1606 amongst the natives, for catechism lessons. In 1614 he was a parish priest in Cunhaú.

On 16 July 1645 – a Sunday – there were 69 people gathered in the chapel of Our Lady of the Candles for a Mass that Soveral presided over. It was just before the Eucharistic rite that Dutch soldiers attacked the chapel and murdered Soveral and a companion – Domingos Carvalho – along with others. [1]

On 3 October 1645 a total of 200 armed natives with their Dutch allies targeted and hacked to death 30 individuals including children and one priest. [1] The leader of this group was the radical Calvinist Antonio Paraopaba. [3] Mateus Moreira – a victim of the onslaught – cried out as he died: "Praise be the Blessed Sacrament". [4]

The beatification process opened in Natal on 6 June 1989 after the Congregation for the Causes of Saints issued the official "nihil obstat" and titled them all as Servants of God. The diocesan process spanned from 1989 until 1994 and the C.C.S. later validated this process on 25 November 1994 before receiving the Positio in 1998.

The theologians approved the cause on 23 June 1998 as did the C.C.S. on 10 November 1998. Pope John Paul II confirmed that the group were all killed "in odium fidei" (in hated of the faith) and thus approved their beatifications. He presided over the beatification celebration in Saint Peter's Square on 5 March 2000.

Pope Francis had expressed in the past his closeness to this particular cause and expressed willingness to canonize them as saints. The C.C.S. met on 14 March 2017 to discuss the omission of the miracle needed for canonization and voiced their approval of that. The pope approved the canonization on 23 March 2017 in an official decree with the date formalized at a gathering of cardinals on 20 April; the group was canonized in Saint Peter's Square on 15 October 2017.

The postulator for this cause at the time of the canonization was Fra Giovangiuseppe Califano. 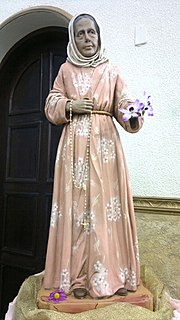 Francisca de Paula de Jesus - also known as Nhá Chica - was a Brazilian Roman Catholic laywoman who was a popular religious figure in Brazil known for her humble life and her dedication to God. Nhá Chica bore no surname and was an illegitimate child born to a slave mother; she herself was a slave until being freed in 1820 which allowed her to dedicate herself to the plight of the region's poor and the construction of a Marian chapel near which she resided for the remainder of her life. 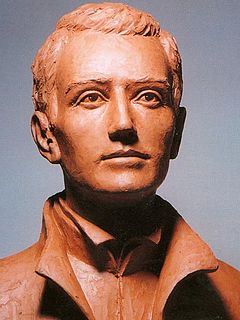 Bernardo Francisco de Hoyos de Seña was a Spanish Roman Catholic priest and a professed member of the Society of Jesus. He is best known for his ardent devotion to the Sacred Heart and for his constant promotion of it until his premature death.

Stephen Pongracz was a Hungarian Jesuit priest, martyr and saint of the Catholic Church.

Francesco Antonio Marcucci was a Roman Catholic Italian bishop and a member of the Secular Franciscan Order. Marcucci was also the founder of the Pious Workers of Mary Immaculate.

Blessed Mosè Tovini was an Italian Roman Catholic priest and was both the nephew and godson of Blessed Giuseppe Antonio Tovini.

Francisco de Paula Victor was a Brazilian Catholic priest. He is known in Brazil as the "Apostle of Charity" for his charitable treatment of the poor. He is the first black Brazilian national to be beatified in the Roman Catholic Church and the first slave-turned-priest to be considered for canonization.

Lindalva Justo de Oliveira was a Brazilian Roman Catholic professed religious and a professed member of the Vincentian Sisters. Oliveira worked at, Dom Pedro II Home, a retirement home, where she was killed in 1993 after a man obsessed with her stabbed her 44 times when she refused his unwanted advances.

The Blessed Martyrs of Laos are seventeen Catholic priests and professed religious as well as one lay young man venerated as martyrs killed in Laos between 1954 and 1970 of the First and Second Indochina Wars during a period of anti-religious sentiment under the Pathet Lao Theravada Buddhist-communist political movement.

The Blessed Martyrs of Albania were a collective group of 38 individuals killed during the Communist regime in Albania from 1945 until 1974. All were born at various times between 1874 and 1935; the group included Albanians and Italians as well as one German. Each of these individuals, apart from four, were part of the religious life as either priests or religious and served as either missionaries or educators with a great deal spending their educational formation in Italian and Austrian cities.

André de Soveral, SJ was a Portuguese-Brazilian Catholic priest saint and martyr, killed during the Restoration War at the so-called Martyrdom of Cunhau, a massacre promoted by Dutch troops and their Calvinists Protestant elders, who fought against the Portuguese Empire in Brazil. Soveral was canonized in 2017 by Pope Francis along with 29 fellow martyrs.

Ambrósio Francisco Ferro was a Brazilian priest and is a saint of the Catholic Church.

Mateus Moreira is a Brazilian Catholic martyr. He was beatified on March 5, 2000 and canonized on October 15, 2017, along with the remaining Martyrs of Cunhaú and Uruaçu.