Pope Boniface I (Latin : Bonifatius I) was the bishop of Rome from 28 December 418 to his death on 4 September 422. His election was disputed by the supporters of Eulalius until the dispute was settled by Emperor Honorius. Boniface was active in maintaining church discipline, and he restored certain privileges to the metropolitical sees of Narbonne and Vienne, exempting them from any subjection to the primacy of Arles. He was a contemporary of Augustine of Hippo, who dedicated to him some of his works.

Little is known of his life antecedent to his election. The "Liber Pontificalis" calls him a Roman and the son of the presbyter Jocundus. He is believed to have been ordained by Pope Damasus I (366-384) and to have served as representative of Innocent I at Constantinople (c. 405). [1]

On the day of the funeral for Pope Zosimus, which was held at San Lorenzo fuori le Mura, partisans of Eulalius occupied the Lateran. Later that day, Eulalius arrived there with a crowd consisting of deacons, laity, and a few priests, and was elected bishop. The new pope and his supporters remained at the church until Sunday, 29 December, for the formal ordination customarily took place on a Sunday.

Meanwhile, on Saturday after Eulalius had been elected, a majority of the priests of the church elected Boniface, who had previously been a councilor of Pope Innocent, and he too was consecrated on 29 December, at the Church of Saint Marcellus in the Campus Martius. The Urban Prefect Aurelius Anicius Symmachus warned both parties to keep the peace and wrote to the Emperor Honorius that Eulalius, who had been elected first and in due order, was in the right. The Emperor answered on 3 January 419, recognizing Eulalius as the rightful bishop of Rome. Despite these official acts, violence broke out between the two groups, and Boniface was seized by the Prefect's police and taken to a lodging outside the walls where he was detained under the surveillance of the Prefect's agents. [2]

Boniface's partisans did not let the matter rest there and sent a petition to Emperor Honorius alleging irregularities in the election of Eulalius. In response, the Emperor suspended his previous order and summoned both parties to appear for judgment before him and other Italian bishops on 8 February. The hearing deferred a decision to a synod which was scheduled to meet at Spoleto on 13 June, but commanded both Boniface and Eulalius to stay out of Rome. Since Easter was approaching, the bishop of Spoleto, an outside party, was asked to celebrate the rites of this important holy day in Rome. [3]

Both the Empress Galla Placidia and her husband Constantius III favored Eulalius, who had been elected first. Stewart Oost observes that papal elections at the time were "still quite indefinite and both parties could thus with right claim proper election and consecration." Although Eulalius appeared to be destined to be confirmed to the post, by boldly entering Rome on 18 March—Easter Sunday that year fell on 30 March—and disobeying Imperial orders, he lost the support of the authorities. Symmachus sent his police to occupy the Lateran, where Eulalius had established himself and escorted him to a house outside the walls of Rome. Bishop Achilleus of Spoleto celebrated the Mass in the Lateran. The proposed Council of Spoleto was canceled, and on 3 April 419, Emperor Honorius recognized Boniface as the rightful pope. [4]

Boniface ordered the singing of the Gloria in excelsis on Maundy-Thursday, and regulated several points of Church discipline. He reversed some of his predecessor's policies regarding church administration. He reduced the vicariate authority giving Patroclus, Bishop of Arles, jurisdiction over other Gallic sees and restored the metropolitan powers of the chief bishops of provinces. He supported Hilary, Archbishop of Narbonne, in his choice of a bishop of the vacant See of Lodeve, against Patroclus, who tried to install someone else. He also insisted that Maximus, Bishop of Valence, should be tried for his alleged crimes, not by a primate, but by a synod of the bishops of Gaul, and promised to sustain their decision. [1]

He persuaded Emperor Theodosius II to return Illyricum to Western jurisdiction and defended the rights of the Holy See. [5]

Galla Placidia, daughter of the Roman emperor Theodosius I, was a mother and advisor to Valentinian III from 423 until his majority in 437, and a major force in Roman politics for most of her life. She was queen consort to Ataulf, king of the Visigoths from 414 until his death in 415, and briefly empress consort to Constantius III in 421.

Year 417 (CDXVII) was a common year starting on Monday of the Julian calendar. At the time, it was known as the Year of the Consulship of Honorius and Constantius. The denomination 417 for this year has been used since the early medieval period, when the Anno Domini calendar era became the prevalent method in Europe for naming years. 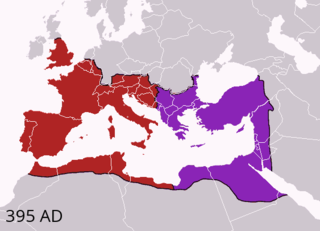 Year 395 (CCCXCV) was a common year starting on Monday of the Julian calendar. At the time, it was known as the Year of the Consulship of Olybrius and Probinus. The denomination 395 for this year has been used since the early medieval period, when the Anno Domini calendar era became the prevalent method in Europe for naming years.

Year 414 (CDXIV) was a common year starting on Thursday of the Julian calendar. At the time, it was known as the Year of the Consulship of Constantius and Constans. The denomination 414 for this year has been used since the early medieval period, when the Anno Domini calendar era became the prevalent method in Europe for naming years

Athaulf was king of the Visigoths from 411 to 415. During his reign, he transformed the Visigothic state from a tribal kingdom to a major political power of Late Antiquity.

Joannes or John was a Roman usurper (423–425) against Valentinian III.

ComesBonifatius was a Roman general and governor of the Diocese of Africa. He campaigned against the Visigoths in Roman Gaul and the Vandals in Roman North Africa. An ally of Galla Placidia, mother and advisor of Valentinian III, Bonifacius engaged in Roman civil wars on her behalf against the generals Flavius Felix in 427-429 and Flavius Aetius in 432. Although he defeated the latter at the Battle of Rimini, Bonifacius suffered a fatal wound and was succeeded by his son-in-law Sebastianus as patricius of the Western Roman Empire.

Flavius Castinus held the position of patricius in the court of Roman Emperor Honorius at the time of the Emperor's death, and most likely for some time before. He also served as consul for the year 424. 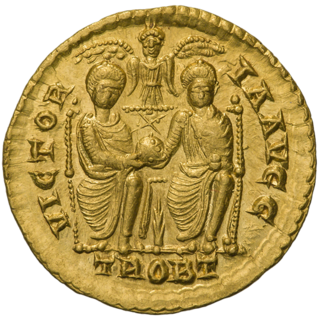 The Valentinianicdynasty or Valentinian dynasty was a ruling house of five generation of dynasts, including five Roman emperors during Late Antiquity, lasting nearly a hundred years from the mid fourth to the mid fifth century. They succeeded the Constantinian dynasty and reigned over the Roman Empire from 364 to 392 and from 421 to 455, with an interregnum (392–423), during which the Theodosian dynasty ruled and eventually succeeded them. The Theodosians, who intermarried into the Valentinian house, ruled concurrently in the east after 379. 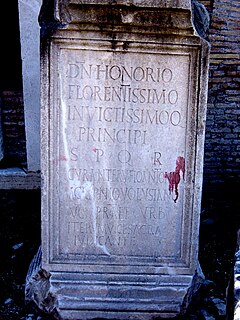 Rufius Antonius Agrypnius Volusianus was a fifth-century Roman aristocrat who held at least two important posts during the reign of the emperor Honorius. He is best known for his exchange of letters with St. Augustine.