Pelagius was a native of Rome, but probably of Ostrogothic descent, as his father's name was Winigild. Pelagius appealed for help from Emperor Maurice against the Lombards, but the Eastern Romans were of little help, forcing Pelagius to "buy" a truce and turn to the Franks, who invaded Italy, but left after being bribed by the Lombards. [1] 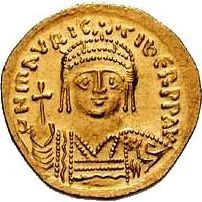 Maurice was Byzantine Emperor from 582 to 602. A prominent general, Maurice fought with success against the Sasanian Empire. After he became Emperor, he brought the war with Sasanian Persia to a victorious conclusion. Under him the Empire's eastern border in the South Caucasus was vastly expanded and, for the first time in nearly two centuries, the Romans were no longer obliged to pay the Persians thousands of pounds of gold annually for peace.

Pelagius labored to promote the celibacy of the clergy, and he issued such stringent regulations on this matter that his successor Pope Gregory I thought them too strict, and modified them to some extent. [1]

During his pontificate, the bishop of Milan, who had broken communion with Rome in the Schism of the Three Chapters, returned to full communion around 581, while other bishops in Northern Italy remained in schism. [1]

Milan is a city in northern Italy, capital of Lombardy, and the second-most populous city in Italy after Rome, with the city proper having a population of 1,395,274 while its metropolitan city has a population of 3,245,308. Its continuously built-up urban area has a population estimated to be about 5,270,000 over 1,891 square kilometres. The wider Milan metropolitan area, known as Greater Milan, is a polycentric metropolitan region that extends over central Lombardy and eastern Piedmont and which counts an estimated total population of 7.5 million, making it by far the largest metropolitan area in Italy and the 54th largest in the world. Milan served as capital of the Western Roman Empire from 286 to 402 and the Duchy of Milan during the medieval period and early modern age.

The Schism of the Three Chapters was a schism that affected Chalcedonian Christianity in Northern Italy lasting from 553 to 698 AD, although the area out of communion with Rome contracted throughout that time. It was part of a larger Three-Chapter Controversy that affected the whole of Roman-Byzantine Christianity.

Pelagius ordered the construction of the Basilica di San Lorenzo fuori le Mura, a church shrine over the place where Saint Lawrence was martyred. During his reign, the Visigoths of Spain converted, but he also faced conflict with the See of Constantinople over the adoption of the title of "Ecumenical Patriarch," which Pelagius believed to undermine the authority of the papacy. [1] [2] [3] 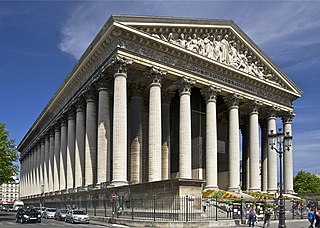 A shrine is a holy or sacred place, which is dedicated to a specific deity, ancestor, hero, martyr, saint, daemon, or similar figure of respect, at which they are venerated or worshipped. Shrines often contain idols, relics, or other such objects associated with the figure being venerated. A shrine at which votive offerings are made is called an altar. 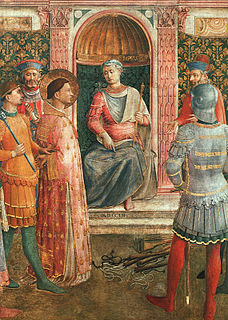 Pelagius fell victim to the plague that devastated Rome at the end of 590. [1] 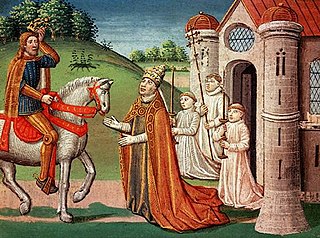 Pope Adrian I was Bishop of Rome and ruler of the Papal States from 1 February 772 to his death in 795. He was the son of Theodore, a Roman nobleman. 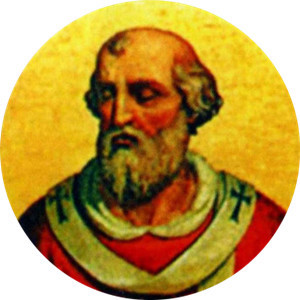 Pope Stephen II (Latin: Stephanus II ; 714 – 26 April 757 a Roman aristocrat was Bishop of Rome from 26 March 752 to his death in 757. He succeeded Pope Zachary following the death of Pope-elect Stephen. Stephen II marks the historical delineation between the Byzantine Papacy and the Frankish Papacy. 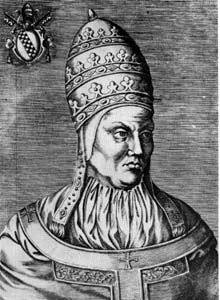 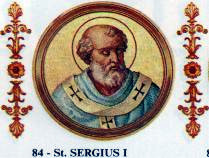 Pope Telesphorus was the Bishop of Rome from c. 126 to his death c. 137, during the reigns of Roman Emperors Hadrian and Antoninus Pius. He was of Greek ancestry and born in Terranova da Sibari, Calabria, Italy. 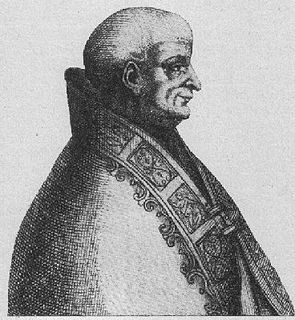 Pope Lucius II, born Gherardo Caccianemici dal Orso, was Pope from 9 March 1144 to his death in 1145. His pontificate was notable for the unrest in Rome associated with the Commune of Rome and its attempts to wrest control of the city from the papacy.

Pope Anacletus, also known as Cletus, was the third Bishop of Rome, following Saint Peter and Pope Linus. Anacletus served as pope between c. 79 and his death, c. 92. Cletus was a Roman, who during his tenure as Pope, is known to have ordained a number of priests and is traditionally credited with setting up about twenty-five parishes in Rome. Although the precise dates of his pontificate are uncertain, he "...died a martyr, perhaps about 91". Cletus is mentioned in the Roman Canon of the mass; his feast day is April 26.

Pope Sabinian was Pope from 13 September 604 to his death in 606, during the Byzantine domination of the Papacy; he was the fourth former apocrisiarius to Constantinople to be elected pope. 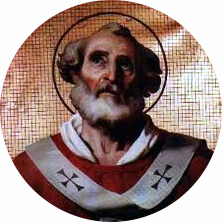 Pope Hormisdas was Pope from 20 July 514 to his death in 523. His papacy was dominated by the Acacian schism, started in 484 by Acacius of Constantinople's efforts to placate the Monophysites. His efforts to resolve this schism were successful, and on 28 March 519, the reunion between Constantinople and Rome was ratified in the cathedral of Constantinople before a large crowd. 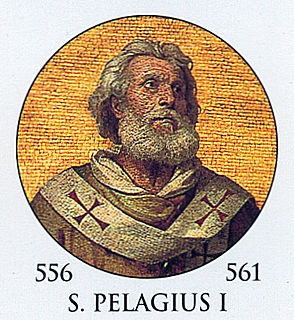 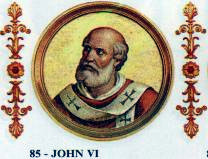 The Three-Chapter Controversy, a phase in the Chalcedonian controversy, was an attempt to reconcile the Non-Chalcedonian Christians of Syria and Egypt with the Great Church, following the failure of the Henotikon. The Three Chapters that Emperor Justinian I anathematized were: 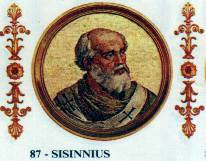 Pope Sisinnius was Bishop of Rome from 15 January to his death in 708.

Papal primacy, also known as the primacy of the Bishop of Rome, is an ecclesiastical doctrine concerning the respect and authority that is due to the pope from other bishops and their episcopal sees.

There was no fixed process for papal selection before 1059. Popes, the bishops of Rome and the leaders of the Catholic Church, were often appointed by their predecessors or secular rulers. While the process was often characterized by some capacity of election, an election with the meaningful participation of the laity was the exception to the rule, especially as the popes' claims to temporal power solidified into the Papal States. The practice of papal appointment during this period would later give rise to the jus exclusivae, a veto right exercised by Catholic monarchies into the twentieth century. 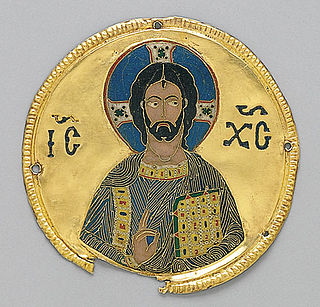