This list of Catholic artists concerns artists known, at least in part, for their works of religious Roman Catholic art. It also includes artists whose position as a Roman Catholic priest or missionary was vital to their artistic works or development. Because of the title, it is preferred that at least some of their artwork be in or commissioned for Catholic churches, which includes Eastern Catholic Churches in communion with the Pope.

Note that this is not a list of all artists who have ever been members of the Roman Catholic Church. Further, seeing as many to most Western European artists from the 5th century to the Protestant Reformation did at least some Catholic religious art, this list will supplement by linking to lists of artists of those eras rather than focusing on names of those eras. 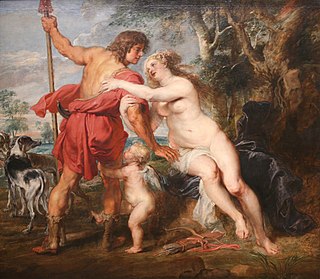 The Baroque is a style of architecture, music, dance, painting, sculpture, poetry, and other arts that flourished in Europe from the early 17th century until the 1740s. In the territories of the Spanish and Portuguese empires including the Iberian Peninsula it continued, together with new styles, until the first decade of the 19th century. It followed Renaissance art and Mannerism and preceded the Rococo and Neoclassical styles. It was encouraged by the Catholic Church as a means to counter the simplicity and austerity of Protestant architecture, art, and music, though Lutheran Baroque art developed in parts of Europe as well.

Veit Stoss was a leading German sculptor, mostly working with wood, whose career covered the transition between the late Gothic and the Northern Renaissance. His style emphasized pathos and emotion, helped by his virtuoso carving of billowing drapery; it has been called "late Gothic Baroque". He had a large workshop, and in addition to his own works there are a number by pupils. He is best known for the altarpiece in St. Mary's Basilica in Kraków, Poland.

Anton Raphael Mengs was a German painter, active in Dresden, Rome, and Madrid, who while painting in the Rococo period of the mid-18th century became one of the precursors to Neoclassical painting, which replaced Rococo as the dominant painting style in Europe. 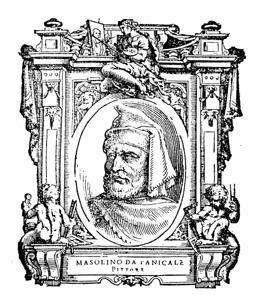 Masolino da Panicale was an Italian painter. His best known works are probably his collaborations with Masaccio: Madonna with Child and St. Anne (1424) and the frescoes in the Brancacci Chapel (1424–1428).

Federico Barocci (c. 1535 in Urbino – 1612 in Urbino) was an Italian Renaissance painter and printmaker. His original name was Federico Fiori, and he was nicknamed Il Baroccio. His work was highly esteemed and influential, and foreshadows the Baroque of Rubens. He is generally considered the greatest and the most individual painter of his time in central Italy.

The Agony in the Garden of Gethsemane was an episode in the life of Jesus which appears in the four canonical gospels, between the Farewell Discourse at the conclusion of the Last Supper and Jesus' arrest.

Alonso Cano or Alonzo Cano was a Spanish painter, architect, and sculptor born in Granada.

Montepulciano is a medieval and Renaissance hill town and comune in the Italian province of Siena in southern Tuscany. It sits high on a 605-metre (1,985 ft) limestone ridge, 13 kilometres (8 mi) east of Pienza, 70 kilometres (43 mi) southeast of Siena, 124 kilometres (77 mi) southeast of Florence, and 186 kilometres (116 mi) north of Rome by car.

Giulio Campi was an Italian painter and architect. His brothers Vincenzo Campi and Antonio Campi were also renowned painters.

Franz Ittenbach was a German religious painter, in the Nazarene style, associated with the Düsseldorfer Malerschule.

Matteo di Giovanni was an Italian Renaissance artist from the Sienese School. 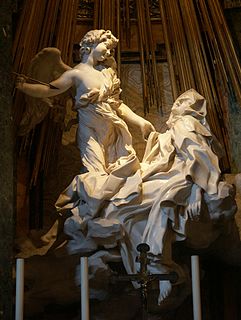 Baroque sculpture is the sculpture associated with the Baroque style of the period between the early 17th and mid 18th centuries. In Baroque sculpture, groups of figures assumed new importance, and there was a dynamic movement and energy of human forms—they spiralled around an empty central vortex, or reached outwards into the surrounding space. Baroque sculpture often had multiple ideal viewing angles, and reflected a general continuation of the Renaissance move away from the relief to sculpture created in the round, and designed to be placed in the middle of a large space—elaborate fountains such as Gian Lorenzo Bernini‘s Fontana dei Quattro Fiumi, or those in the Gardens of Versailles were a Baroque speciality. The Baroque style was perfectly suited to sculpture, with Bernini the dominating figure of the age in works such as The Ecstasy of St Theresa (1647–1652). Much Baroque sculpture added extra-sculptural elements, for example, concealed lighting, or water fountains, or fused sculpture and architecture to create a transformative experience for the viewer. Artists saw themselves as in the classical tradition, but admired Hellenistic and later Roman sculpture, rather than that of the more "Classical" periods as they are seen today.

Gabriele Paleotti was an Italian cardinal and Archbishop of Bologna. He was a significant figure in, and source about, the later sessions of the Council of Trent, and much later a candidate for the papacy in 1590, and is now mostly remembered for his De sacris et profanis imaginibus (1582), setting out the Counter-Reformation church's views on the proper role and content of art.

Giovanni da Nola (1478–1559), also known as Giovanni Merliano, was an Italian sculptor and architect of the Renaissance, active in Naples.

Pedro Campaña (1503–1586) was a Flemish painter of the Renaissance period, mainly active in Italy and Spain. His actual name was Pieter de Kempeneer, translated into French as Champaigne, and was also known as Peter van de Velde.